Lets imagine for a second that we are playing american football and the quarterback hands you the ball. You take off running with a moderate fear for your life.

Amazingly you make it past almost every player on the opposing team.

But there is one problem…

There is one player dead in front of you that is 6’5″ and 325 lbs. of solid muscle, just itching to re-arrange your face.

Assuming you will get clobbered. Would you rather him be running toward you or backing away from you?

It’s kind of a no-brainer. Obviously it is going to hurt a lot less when he hits you, if he is backing away. The same is true with any collision. The more momentum, the more face re-arranging that is possible.

I this video I’m going to show you the sequencing of the upper and lower body in the golf swing, so you’ll be the one doing the smashing!

What's Covered: How to sequence the upper and lower body in the golf swing. How you can build momentum like a train to get your full energy potential.

All right you guys, today I have a great drill for you, and it has to do with building momentum in the golf swing.

So we’re going to talk about the power turn, how to get a good full load going back, and then how that creates momentum with both the hips, the shoulders, the arms, coming through the swing.

You’re going to be more powerful when you get this right. I’ve got a great drill for you guys.

OK, so you guys have probably heard of the Kinematic sequence in golf, just really just talking about the sequence that we fire different parts of our body.

So when do we fire the hips, the shoulders, the arms, the club, all that. That’s all very important in the golf swing.

You also hear about ground force reaction, a lot of things that sound really complicated, but it’s actually a very simple concept.

Basically how this is going to work is as we go to the top of the swing, as we start down we’re initially going to start with the hips.

So the hips and the body and everything is going to start to move together at first.

So great way to visualize this is by visualizing a train driving down the railroad tracks, and imagine this really long train, say it’s two or three mile long train, all these cars attached together, and this train is moving 60 miles an hour.

Now on the roof of that train, there’s a third train, it’s also moving 60 miles an hour, on its own, but when you add all three of those together, you’re ending up with a total speed of the top train of 180 miles an hour.

That’s exactly how it works in the golf swing as we’re going in the down swing.

And then as I start down my hips are going to go first, my body’s going to be trailing along with it, and these are kind of like the first train, the 60 mile and hour train.

As my shoulders start to accelerate, they add speed on top of that to go to 120 miles an hour, and then as my arms add speed, it adds even more and then finally my wrist release, that’s going to max out my speed.

So that’s kind of how it works. The bottom train, the initial factor, doesn’t move that fast but as you start adding more and more pieces to it, the speed increases more and more, and we’ve got a great drill for you guys to really work on that, and it’s very, very simple.

So let’s go ahead and do that drill.

So we’re just going to focus on the hips and the shoulders today, and then we can add the arms to that in the release video.

So I’ll just have an alignment rod stuck through my belt loops here, and this is going to show you basically the angle of my hips.

I’m going to put another one across my shoulders, and you can see as I go to the top of my swing, as I fully load up my hips should turn about 45°, and I want this top alignment rod to be pointing to about my right toe.

Now it’s not actually going to be pointing down to my toe, but if I’m looking out, it’s going to be turned back that far.

So if you’re looking from face on, I want to get this top stick facing roughly to my right toe out in the distance.

Now from there, as I start down, these sticks are going to move together, so I’m keeping separation between my hips and my shoulders, and then as I get lower in the down swing, as I’m getting closer and closer to impact, the shoulders are catching up with the hips.

Those are going to be fully synched up in the release.

So if we go to the full release which would be the straight line release, now you can see my hips and my shoulders are both in the same direction and that’s when everything is releasing with the golf club.

Let me go ahead and do it this direction.

Now as I’m lined up, full turn going back, nice separation between the hips and shoulders, as I’m coming forward my shoulders are still lagging behind, and then as I go to the full release they’re going to be fully synched up.

So as you do this a few times, you’ll start to feel how and when to synch up the hips and the shoulders to get those working together.

So if I do this incorrectly, it might look if I had an over the top, using too much shoulders early, I might look something like this.

Now my shoulders are opening up too soon, and they’re already past my hips, I don’t want to do that.

Let’s take a look at that one more time from this direction.

As I start down if I go too early with my shoulders, I’m going to be this way.

Shoulders outracing the hips and I’m just burning speed. I want to make sure I get a good full turn, and they don’t get synched up until 45 into the release which would be the straight line release point.

So I want you to do about 100 repetitions of this, then we’ll go ahead and add a club.

All right so now we’re going to go ahead and do this with an actual golf ball. I’m inside today so I’m hitting a whiffle ball, ideally you’ll be doing this out on the range.

I’m going to take, we’re going to address this ball just inside of the ball, so we won’t actually be hitting it.

I want to make a good full turn as I go to the top, shoulders are getting past 90°, hips and shoulders are separated, then I’m going to do a slow motion down swing, synching everything up as I’m in the straight line release.

So if you’re not familiar with the straight line release start working through those videos so we’ll know exactly where we need to be.

But I’m going to get that feeling of a full turn going back, and a good synched up position with the hips and the shoulders as we’re coming through.

I’ll do a couple slow motion repetitions like that, and I’ll try to recreate that same feeling as I’m hitting the golf ball.

There we go, that one felt pretty good. Felt like I was nice and synched up.

You guys go ahead and work on this drill, do the same thing about 100 times.

Do one slow motion repetition, pause, hit a golf ball, that’s one rep.

Do it about 100 times, take your time, go nice and slow, and you’ll start feeling like everything’s in synch and your rhythm and timing is a lot better.

Good luck to you guys and I’ll see you all soon. 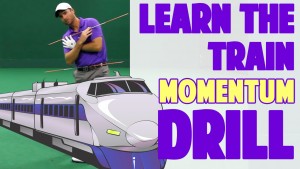