No matter how flexible a person is, they won’t be able to get to a good full 90 degree shoulder turn, without properly using the hips.

In this video I will go over how to use the hips in the backswing, to create a good, powerful, shoulder turn.

What's Covered: How to make a good hip turn in the backswing, so you can fully rotate back and through.

All right, so today I have a really simple video that’s going to help you to get that good full turn as you’re going back.

We know a good, full shoulder turn, or the power turn as we’re going back is going to be incredibly important as we’re developing speed in the swing and developing some momentum with our body.

First, let’s go ahead and stand straight up and down, and put a club across your shoulders. I don’t want you to move your hips at all.

That’s about all the separation that most people can get between their hips and their shoulders.

So what that means is, if we want to get 90° or a little bit farther than that, our hips need to turn about 45° as we’re going back.

So I want my hips to turn about 45°, and I want my shoulders to turn preferably a little bit more than 90 until my club is pointing just outside my right toe here.

So you’ll notice if I don’t turn my hips enough, I really can’t get that club going back, I’m really tight through my midsection, but I haven’t gotten a good enough turn.

If I continue to let the hips go, now I’m going to get that good full turn going back which is really crucial to power.

So let’s go ahead and do a couple swings here, practice swings, and I want you to focus on making a good full turn, then as you get to the top, just let go of the club, make sure your hips are roughly 45° as you’re going back.

So we don’t want the hips to be 90°, you’ll see my left foot coming up, and a lot of extra motion in the lower body, that’s too much of a hip turn.

That’s going to add some inconsistency, and I also don’t want my hips to only turn 15 or 20°, that’s not going to give me any power.

So I’m going to go ahead and do this a few repetitions, I’ll do a few practice swings, and I’ll hit a practice shot here.

I’m going to the top, good full turn, I’m going to let go of my club, I’m checking to make sure it’s about 45, so that looks good.

There we go. That was just a whiffle ball because we’re indoors, but you could see there I got a good full turn, my shoulders got past 90, and that gave me a lot of momentum in my downswing to then transfer into my arms, and eventually the club to get a lot of speed.

So good luck, do about 100 repetitions like this just turning to the top, pausing, letting go of the club, checking your hips. You can do these indoors in your living room.

Once you’ve done that do another 100 repetitions next time you go to the range, I’m going to do the same thing, go to the top, pause, check my hips, that looks good, and I’m going to go ahead and make a full swing, hit the shot, that’s going to count as one repetition.

Go ahead and hit about 100 shots doing that, and you guys are really going to be getting the power into the ball, it’s going to feel very fluid, very effortless. 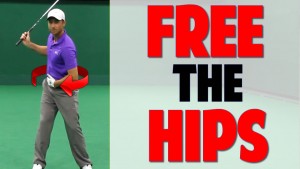