In this fourth video in my groundbreaking The Move course, you’ll get a few drills that’ll help you improve your golf swing speed and momentum.

At this point in the course, you should be starting to shallow out your club for a more in-to-out path…

And starting to deloft the club face and compressing the heck out of the ball.

And maybe even starting to hook the ball a bit.

Because this means you’re close to getting that powerful swing you’ve always wanted.

So don’t worry about hooking it just yet…

Before the series is over, you’ll get some easy-to-implement tips that’ll help you straighten out your shots.

Now back to this video…

What you may not know is that the average PGA tour player takes about 33% of the loft off the club at impact compared to address.

And that’s one of the reasons why the pros hit their clubs so far.

Well the drills you’re about to learn will help you deloft your clubs just like the pros.

In this video, you’ll discover how to release all the built up energy in your swing…

And you’ll start to whip your club through impact.

So check out this video now to crack that whip for max distance!

What's Covered: How to get good contact while applying lag with forward shaft lean and to release that lag for power.

Hi guys, and welcome back. I hope it’s working very well for you guys. You should be shallowing out this club, getting that delofted, really compressing the heck out of that ball.

At this point you may be seeing those balls start to really turn over from right to left, maybe go lower than they ever have before, because you are getting so much compression. That’s OK.

As you’re first learning to do this, you may over hook it, completely fine. Good player problems again. They’re good problems to have, because we’re going to be able to go out there and hit the ball pretty solid as we’re doing this.

Now let’s go ahead and talk about the release, the final piece to tie all this in together. Let me recap on what we’ve done before.

We talked about as we went to the top, we’re going to shallow this club out as we’re starting down. At the same time as it’s shallowing, my hands and wrist are starting to close that club face like we did with the tennis racket.

As we came down, our hand was basically just over our left knee, our right knee, excuse me, the left hand’s over my right knee. My club’s parallel with the ground, and I’ve delofted this club face there.

My hips are open, my right heel’s off the ground, so that’s basically what we’ve worked on so far. Let’s talk about how we get rid of all that forward shaft lean.

Because what should be happening as you’re coming through contact, is we’re going from tons of forward shaft lean – look at this big angle between my wrists and my club, or my right forearm and my club – and then as I come through, I’m releasing all that.

I’m releasing all that angle to get that to whip on through contact and get a lot of speed doing that. I want you to do this with two motions.

Number one, let’s go back down again to where we’re here, and my hand’s basically just over my right knee cap as far as height wise.

From there, my leg should be pretty bent. When looking at it from this way, my leg is nice and bent. My hips are starting to open, and then my left leg is going to be bent.

Now what I should be feeling like I’m doing at this point, my left leg will be slightly turned out like this. My upper part of my leg, my femur, is going to be angled back slightly.

Here’s that lag position, really good lag late in the downswing, and then I’m going to drive up with that left leg and now I’m in the straight line release just like we talk about in the system, where I’m letting all these angles go, letting that club whip on through there.

As you’re practicing this, I want you to go ahead and do about 100 reps doing exactly that. Go ahead and get in that lag position just like we’ve been working on, that club face goes down.

My left leg is out slightly, and then from there, bam, I’m straightening my left leg. At this point, my left leg should be pretty much dead straight. Hips are obviously going to be open, and now my hips are facing the straight line release like we talked about.

If you’re looking at it from this direction, we’re going to see if I’m going directly toward the camera. Let’s actually move it over here, so you can see a better angle.

Let’s go ahead and try one out. I’m going to go ahead and bring the camera over to face on. We’ll do a slow motion video and you guys will be able to see this in action.

All right guys, so now we can see as I’m coming in slow motion, you see I’ve got a huge amount of lag in my downswing. My left leg is still bent, I’m saving up that lag to the last second.

Then as my left leg starts to plant into the ground, my hips open, now I’m releasing all that lag and you can see that I’m getting into the straight line release out in front.

All right guys, so go ahead and work on those drills. Go through about 100 repetitions, really focusing on that. Go back and forth from hitting some balls and doing practice swings. You’re really going to get a feel for that.

Try to get that ball to really turn over from right to left. Get that draw working in there. Hit those low bullets that are super, super compressed, but I don’t want to be chopping down into the ground.

So go ahead and work on these drills. In the next video, we’ll talk about how to tone down that draw or maybe it’s turning into a bit of a hook, get that straightened out. Then you’re going to be perfect on your compression.

Level 1 | The Move
Return to The Move 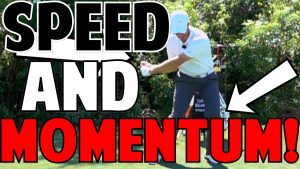