Why You Need This: In this video, you'll discover the world's best lag drill.

In fact, all you need is around 4 minutes to get crazy lag.

He's no stranger to getting tons of lag and crushing the ball.

So, I'm thrilled to have him help show you tips on getting more lag in your swing.

In the video, you'll see Robin demonstrate the Arrow Drill.

Imagine you have a pouch of arrows and you reach back and pull an arrow out.

This motion is similar to how you want to add lag in your downswing.

With your left hand only, go to the top of your backswing and let the driver rest on your shoulders.

Pull the driver away from your body as you start your downswing.

You'll notice as you swing down that you'll create crazy amounts of lag.

Do that drill 5 to 10 times then switch to your right hand only.

After that, do the drill with both of your arms.

The goal is to start ingraining the feeling of creating lag and getting rid of any casting habit you may have.

Watch this video now to generate massive lag in your swing...

And start crushing your drives!

Hey guys, welcome back. I’m joined here with our Top Speed Golf Certified Instructor Robin Rosado. We’re going to be doing a lot of videos together, and we’re going to get some more lag.

I know you guys really want a lot of lag, all the pros have it, and I’ve got a great three-piece drill that Robin’s going to help us demonstrate. Let’s start out by, one of the things I really see people struggling with is casting the club.

When you get to the top of the swing, the right arm takes over, what’s happened is the right forearm, the right shoulder, they’re trying to come down really hard to start the swing and we burn up all our speed prior to getting down to the ball. So we’re not saving up any of that energy.

We’re going to do what’s called an Arrow Drill, so I have one with two hands, where I talk about imagine there’s kind of like a pouch with arrows in it, and I’m going to pull the arrow out of the quiver, and then swing on through.

What I want you to do, just go ahead and start out with the left arm only. We’re going to take it all the way to the top. He’s going to rest that on his shoulder.

Notice how the fingers are on there nice and loose, his elbow is going to be bent for this drill. Don’t have to do that in your real swing, but we’re just doing this for this drill.

Then go ahead and extend that out away like you’re pulling that, there’s sliding that club down your back. Go ahead and do that about three times, letting that club slide against his shoulder.

Now he’s going to swing all the way on trough. This time go ahead and do it all the way on through with some speed this time. There we go, and we see tons of lag. Crazy amounts of lag there.

After we’ve done that about three times, do one more and then we’re going to switch to the right arm only. There we go.

Don’t have to worry about anything specific, what I do want you to focus on is make sure this doesn’t get too cupped. I don’t want to cup that wrist, that’s going to be nice and flat.

The fingers are going to be on there soft so you can let it slide like that. Let’s go ahead and do the right hand now. Same drill, we’re going to set the club on our shoulder.

Again, the fingers are resting on the club, it doesn’t have to be tight. You’re going to slide it out and then swing through.

There we go, so let’s go ahead and do one more with just the right arm only. You’re not trying to go fast here, just nice and smooth to get that feeling of the arms going out, tons of lag, and then the club whipping on through.

Let’s go ahead and do one with both hands on there. We’re going to do the same thing. Again, it’s OK for these elbows to bend, let it slide down the shoulder, and then from there swing all the way on around.

Now he’s really got this ingrained, the reason this works is because I can’t cast or that club’s going to come off my shoulder. I’m letting the start of my transition be across the shoulder like that.

So now let’s go ahead and try to rip one, get the same sensation, and we’re just going to swing nice and easy, don’t have to try to kill it, but try to get that same sensation in your swing.

There we go, hammered that one. Got a lot of lag there. So thanks for helping us out, Robin.

Work on those drills, go ahead and do 5 or 10 of each of those. Left arm only, right arm only, both arms, and then make a few swings. You’re going to have a lot more lag, and get some more distance. 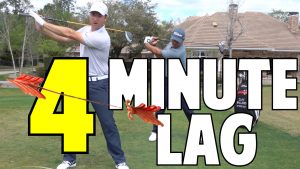