Why You Need This: In this video, you'll discover which golf club to chip with.

When you're next to the green, it's easy to be indecisive on which club is best to hit it close to the hole.

Should you use your putter, 8 iron, sand wedge, or some other club?

This video will answer your questions on club selection.

First, you'll learn a general rule of chipping around the green, which is that you want the ball rolling smoothly on the green as soon as you can.

So, if you're a few feet from the green and the grass is tightly mown with no obstacles, go ahead and putt the ball.

Here are a few tips for putting from the fringe...

What if the ball is further away from the green?

Well, now it's way more difficult to putt the ball as it's harder to judge what speed the ball will be rolling when, and if, it gets to the green.

As you'll see in the video, the club you should use is determined by how much loft you'll need to hit the ball just on the green.

Here are a few tips for chipping on the green...

Next in the video, you'll see how to chip it on the green from even farther back.

You'll see a shot where there's more rough and fringe to deal with, so this shot will need to fly a bit higher and longer to reach the front of the green.

And if you need your chip to fly higher and farther, then you'll need a more lofted club such as a sand wedge.

The key to great chipping is getting familiar with your clubs.

So, practice your chipping with different clubs, and you'll likely start favoring a few clubs over the rest.

As you get a better feel for your favorite clubs, practice until you're consistently chipping just onto the green and getting a nice smooth roll to the pin.

Watch this video now to finally understand which golf club to chip with...

And lower your scores!

Hi guys, so in this video we’re going to talk about one of the most common things that people struggle with when they’re around the green is, what club do I use? Do I use my putter, my 8 iron, my sand wedge, anything in between?

I’m going to give you a general rule of thumb here. I want to get this ball rolling smoothly on the green as quickly as possible. So here’s my flag that I’m going to be hitting to, and I find myself just a few feet off the green.

Now I could use jut about any club I wanted to from here, what would be the easiest way for me to get the ball rolling smoothly on the green as quickly as possible? I don’t ever want to get that ball hopping, and jumping, and bouncing any more than it needs to.

Here with my putter, I feel like I can do a pretty good job of getting that ball to roll really smoothly. This grass is really nicely, tightly mown, very uniform, it’s not going to get a lot of kicks or bounces one way or another. I know I can putt it, and I’m going to be pretty accurate from here.

Let’s imagine for a second that maybe there was a little rough spot, or a sprinkler in the way. I wouldn’t want to putt then, because then my ball could bounce and kick it off line. But here, this is a perfect spot to be able to putt from and to feel like I can be pretty accurate.

So from here, I’m just going to visualize my stroke. I’m going to hit it a little bit firmer because I’m trying to get through the longer grass in the beginning. I want to also be sure -- I’ve got a little bit of an upslope -- I want to match my shoulders to this slope and make a nice, smooth, easy stroke.

There we go, so just a little bit too hard, overall pretty decent line. Should be able to get that one up and down.

Now let’s imagine we’ve gone a little farther back, and let’s see if we still want to use this putter. Now I’m a little bit farther away. Before I had a nice short putt just to get over a few feet of fringe. Now I’ve got about 15 or 16 feet to get through the fringe.

Ideally, as I start to get farther away, again I want to get the ball on the green as quickly as possible, rolling as smoothly as possible and consistent. I think it’s going to be a better idea to chip it, get it to land over that fringe and then roll out.

So here I’m going to use a 9 iron, you could probably use a pitching wedge, maybe even an 8 iron, but I’m going to try to land on the front of the green and get it roll the rest of the way. Now one thing to keep in mind, I’m going to go ahead and take a nice, smooth stroke.

My weight is going to favor my left side just slightly, a little bit of forward shaft lean, and as I come through the shot, I’m going to make sure that my left wrist stays nice and flat. I don’t want to start flipping the club and getting my left wrist to break down like that.

So I want to make sure my wrist stays nice and flat as it comes on through. My hips and my body are going to have to rotate on through together, kind of as one unit as I’m doing this. As I go ahead and hit this shot, I should be able to land it right on the front of the fringe, and it will roll out right to the pin.

There we go, landed about one inch on the green, came out about a foot or so short of the pin, that’s a good shot. I know I picked the right club. I could have used a pitching wedge and carried it a little bit farther, but I got it rolling consistent right on the front of the green.

Now let’s go ahead and talk about when we would have to use the sand wedge or lob wedge.

All right, so now we’re even farther away. If we hit a putter from here, man, we’ve got just too much long grass to go through. If I have to hit it that hard to get through the tough grass, the longer grass, it may just take off and roll 10 feet by.

If I hit an 9 iron, or an 8 iron, a pitching wedge from here, I’m going to have to land it short of the green. If I land a 9 iron on the green it’s going to roll too far by.

Now keep in mind here, if we’re going to try to get this shot to go up in the air and by pretty consistently, I want to make sure that I’m catching this ball fairly thin on the face. Obviously don’t want to hit it off the bottom leading edge or that kind of thing, but I don’t want to get it way up on the face.

I’m also going to hit it just very, very slightly off the toe. What that allows it to do is kind of catch the ball a little bit extra, it’s going to have what’s called a gear effect, and it’s actually going to get a little bit more spin on that golf ball than if I hit it on the sweet spot.

So I’m going to set up with my normal setup. Again, as I come on through, my body and my hands are rotating through together. That left wrist is going to finish nice and flat, and I’m going to hit very, very slightly off the toe.

There we go, we checked up just a little bit, on the right side of the green. Follow that rule. Get it on the green as quickly as possible with the least amount of bouncing and extra hopping.

Pick whichever club makes you comfortable, and the most important thing here, use every club in your bag when you’re practicing. Find your favorite club.

If it turns out that I love my sand wedge and I chip awesome with it, I’m going to use this the majority of the time, but I need to know how to use all the clubs in my bag so I can have versatility and I can get up and down from anywhere. Good luck to you guys. Work hard, I’ll see you all soon.

[Vault] G118. How to Get Through the Golf Ball | Stop Hanging BackPublished: Jun 29th Get Access Now! 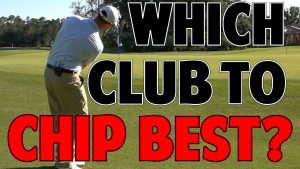