Why You Need This: Today, you'll discover "Where Speed Really Comes From in the Golf Swing"

There’s a tiny body part, that can help generate TONS of extra power…

…and, when you combine it with your lower body moving properly in the swing…

Today, I’ll show you a drill that’ll help incorporate this body part and will have your playing partners wondering who you are with all the extra power you’ll generate!

Now. I bet you've been told that swing speed, that power comes from the hips in the legs, big muscles in the legs. They've got a lot of speed. A lot of power. Makes you feel like that's where it's happening from. Well, let me try to put that to the test here a little bit. If I was to lock my arms and try not to move my upper body, my upper body is going to move a little bit as I'm doing this.

But just rotate my legs and my hips and just hit with my body. So no arm action at all, no real shoulder action, separate separating my shoulder from my hips. Well, see how much swing speed I can get dead straight. I think that is about as solid as I've ever had a shot in my life. Nice and straight.

Nice and solid. 64 miles an hour have swing speed 94 yards in the in air something like that. Not going to be able to hit it very far unless you use your upper body, your shoulders and your arms. Now, for argument's sake, let's go ahead and lock the hips. And this little device I have here is called a PRGR Black.

And I've tested it with my $18,000 launch monitor. And it's within one to two miles an hour every single time with swing speed. So pretty cool device. I highly recommend it. Let me lock off my hips now and I'm just going to swing just all arms. Now, again, I realize I'm using my legs slightly. You can't truly turn off your legs and just use all arms around and do my best job of just trying to swing all arms.

The last one again was I can't even remember now, maybe 60 miles an hour or something like that. Now let's just use all upper body and see how much swing so you can get there Here we go. That ball went a lot farther. Again, I know my hips barely moved a little bit. That one, I swung 107 miles an hour much, much faster.

The first drill is going to help you get the fast muscles over your shoulders and your arms, your wrist. We're going to get that lag and we're going to split that really snap on through there. That's where you get a lot of the speed from. Again, a strong 107. Pretty much just using those muscles then to get the rest of the swing speed.

We're going to add the hips and the lower body. Really get that thing cranking and see if you can get your best drive ever. So what I've done here is I've set up my golf bag. I would normally do this with something a little smoother than this. I just want to give you the idea and then you can recreate it with your own bag, just a countertop, whatever you have take your club, turn it upside down.

And then what I want you to do is we're going to make our back swing. We're going to pause when this club is on this bag. Now, for here, I have this bag locate it a little less than a driver width behind my golf ball. So what I'm going to do here is I want to feel like I keep my club on this bag, this grip on this bag, and I'm going to open up my body.

Notice how my hips are opening up. I'm clearing out of the way. And what I do is I have a ton of lag here. I got this big angle set on my wrist So what this causes me to do, because this is about the same length as a driver, I can have my hands already over top of this golf ball.

And then from there, I still have all this lag and I'm going to try to as soon as this club comes off the bag, I'm going to try to accelerate as hard as I can. Most people hit up here. I'd be smack in the heck out of this golf bag, losing all my lag, burning up all that speed from my shoulders and

My arms, which we talked about, is an important part. This is going to train you to get the speed down here at the golf ball. So as soon as that comes off the bag, then I want to really be fast. I'm using my shoulders, my arms and our wrist just to get as much swing speed as I can there.

Now, you're not going to get a ton of swing speed with this drill, but when we get that feeling and then we add it to the lower body, that's when your speed is really going to take off. So now let's do the same thing. I'm going to feel like I have a bunch of lag here. You're going to notice.

I'm going go back on my left heel like that. So my feet, I want to spin. So I'm going to have this really late hit and I get to here and then I'm going to open up my body and throw the club as hard as I can coming on through there. Now, you'll notice, Bryson, the shambo has kind of a weird looking swing.

This is exactly what he's doing with his feet. That's because he's trying to get as much force as he can from his lower body, from his hips, from his entire body, basically. And those two drills together are going to allow you to get speed at the ball, which is what really matters the most. So do a few reps of both of them individually, and then we're going to put them together, and we're going to see how much swing speed we got.

Here we go. Nice straight drive right down the middle. 127 on a club at speed. Probably see that on my prgr again. Cool little device, because you can put this right into your golf bag. Leave it there all the time. I have one with me all the time. So that's those two drills together. We're going to help you to get some of the highest swing speeds and the best distance that you've ever had.

Now, those two drills, if you do, those are going to make a world of difference for you getting that late hit in that late lag. But there's also some really good things that you can do to make it even easier. So one of the videos that I like is imagining that you have a laser kind of pointing out of the button in the golf club and you try to keep that behind the golf ball as late as you can.

Then that's also going to help you. It's the same idea, the same feeling that you had when that club was on the bag, keeping that really late lag and then I'm letting it rip on through there. That's just one of a couple tricks that I have in the top three golf lag section that's going to make you getting the most lag you've ever had.

Seem really easy. Now what you want to do, if you want to have a ton of lag in your swing and you really want to get it there forever, you want to work that system. So if you're a member of Top Speed Golf Web site, go to the instruction tab at the top of the home screen, go to the tax free golf system, then go to the LAG section in section number one.

You're going to add to what we talked about here today, and you're going to find some more secrets to make it even a little bit better. What we did here, this video today, if you were to videotape your swing, let's see you have a little bit of a cast in the clubs here. You follow the drills that I did in today's video, you're going to get faster.

But if you videotape yourself, that club is going to be about right there as you work through level one to the clubs in together right there. Level two, level three, it's going to get more and more lag the farther you go along in that. So once you get to level three, you're going to find that you have the most like your head.

And the best part about it is it's going to stick around. As you work through that system, you have lag that's going to stay with you. If you just do one video hey, it's great. You're going to get some more speed, but you're not getting the full benefit of what you could had. So finish the drills that we did here today, then head over to the lag section, fall level one level two, level three.

And I can't wait to see it in the level three. When you just make your normal swing, you don't try at all. And you look at it on camera and it's got tons of lag. Best of luck. And I'll see in the lag section. 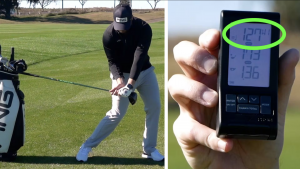