Why You Need This: Today, you'll discover "This Simple Right Arm Tip Will Make a Huge Difference"

Did you know that there’s this one instinctual movement with your right arm (that almost everyone I see does), that’s causing all of the following:

Today, I’ll show you a drill to fix this right arm issue…

...and, as a result, shallowing the club in the downswing will be much easier for you.

Once you start getting the club shallowed, you’ll be making consistently pure ball contact...

The ride. Our movement in the start of the downswing is so important. When I see people struggling with consistency, what's happening is I see their trail arm kind of working out away from their body. And you can see how that gets the club really, really steep. Now, when I do that, I'm going to tend to come way over the top. I'm going to hit weak slices or pull hooks or pulls. I'm not gonna be able to get the ball up in the air very much. Or what I'll see players do is they'll compensate in.

They'll kind of stand up and then they'll flip at the ball. So that's going to add loft. You're going to lose a lot of compression. Not to mention your swing is going to be very dependent on timing because the face is really going from open to closed very, very quickly. And you have the time that face up just, just right every single time. You can imagine how both of these situations can make you very, very inconsistent. When I look at better players, when we look at tour players, what we're seeing is that Trail Arm is working more in like this.

And you can see how that gets the club nice and shallow it out. And what they can do is they can just turn through the ball. It's hard as they want to, and they know they're going to have that club on playing and in the slot every single time. So how do we get this proper feeling to get there?

Well, first we want to understand what's happening what's happening is, is with this trail arm is our our shoulder joint is not working correctly. So when we're coming down steep, we're actually internally rotating in our shoulder joint. So is the best way to think about that as if you're winning an arm wrestling contest, right? If we're getting that elbow to work the right way, we're actually losing the arm wrestling contest.

So it's externally rotating. So we have a great drill for you that's going to help you to get that proper feeling. Now, what I like to use is a little toy ball like this. There's other training aids out there that you've probably seen, but this is just a couple of dollars. You can pick it up at about any toy store and any place that sells toys near you.

And what this is, is it's just about a six inch diameter ball and it's got a little bit of squish to it. You know, a youth soccer ball or a volleyball would probably work well for this as well. I would just, you know, take a little bit of air out of it so that way you can squish it.

Well, we're not going to do is we're not going to just squeeze our elbows together, because if I do that with my left elbow, I'm doing that. And that's deepening the shaft if I do that. So what's really, really important for this to get this proper feeling is to squeeze this ball, but to basically have the feeling that you're squeezing the ball with your right arm into your left arm.

You can see when I do that how that gets the shoulder working in the right way. And this is going to help to train the muscles that you need to to get that proper elbow motion. So again, between the elbows here, we're going to go up to the top and we're going to squeeze that ball. We're going to do a few of those, get that feeling of that, and then we're going to swing all the way through.

You can see when I did that, I got that club shadowing out nicely and the start of the downswing. So I want you to do, you know, ten, 15 of those swings where you're going up to the top and you're kind of doing the pumps as you're coming down, getting the feeling of those muscles. Now, we want to work toward doing this in a nice fluid swing.

So now I'm going to try to do that same thing in a nice fluid swing. So no pause at the top now, but I'm feeling that squeezing of the ball is I'm coming down and go nice and slow with this. At first, it's going to feel probably very weird for you at first. So start out slow and then build up the speed.

Now, it's really cool about this is eventually you can get to where when you're getting used to this motion where you can hit balls with it and you can actually keep the ball between your elbows and hit the ball as well. So let's go ahead and give one a try here where I keep that ball between my elbows and get that club nice and Shallowing out and be able to hit a nice drive here.

Now, before you ask, I'm going to go ahead and tell you this applies to all clubs. We want to have this club shallowing out, and I'm playing as soon as possible with every single club in the back. Now, one other thing I didn't mention is how the wrist need to work in the downswing. Now, that we're getting that club to shallow out. You see, when you're coming down over the top and steep, you need to have that face kind of open as you're coming into contact and you have certain wrist angles to do that. Otherwise you're going to hit it left and left. And you know what? You hope you'll want to have that. That's going to be out of bounds a lot, and it's just not going to lead to very consistent scores. So we need to do now that we're getting this club shout out, we need to learn the proper wrist angles now that we have the hands more ahead of the ball impact the get that club face nice and square, so that way we can be consistent. And this is what we refer to as the move. That's the combination of getting that club nice and shout out and getting that face square as early as possible.

So once you get done with this drill where you're getting that the elbow motion correct, you need to learn to square up the face by working through the move course and to get to the move course. If you're a member, all you have to do is click the instruction tab at the top of the screen, then go to the test. We go system, then go to the move from there, work through those drills get your consistency back, play well. I'll talk to you soon. 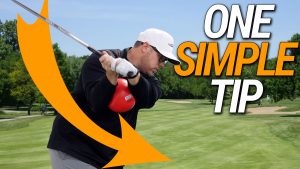