Why You Need This: Today, you'll discover "This Is The SECRET To Hitting It Pure With Less Effort"

…you'll not only discover what the key is to making your swing look super smooth (yet powerful)...

...but you'll also find out the simple way to add this "easy speed" into YOUR swing!

Try this out and let me know how it goes!

So there we go. Nice, smooth swing. 195. Total carry distance with a seven iron. Players ask me all the time, how do you hit it? So far with less what looks like so little effort? Well, the answer is very simple. The answer is we can get very easy speed through getting proper lag in the downswing and then, of course, unloading that lag.

Now, the big hiccup that you're probably getting into when you're working on lag is a ton of different things. There are things where hey, I can get lag, but my risk cup's a lot or I can get you know, I can try to get lag when I in my practice swings, but I end up casting it. Well, if you understand how this works the proper way, it becomes much more simple.

So I'm very excited to share a drill that I do with a lot of my online students. That shows you exactly how lag works in a short swing. The thing is, this lag work works exactly the same in a short swing as it does a full swing. And if you understand it in the short swing, it becomes much more easy to see in the full swing.

So let's go over the short swing first and what's great about doing a short swing and doing anything like this and what I really like to do when I'm teaching is making sure we have very solid reference points and very certain levels, things that we can tangibly see in our mind while we're working on our swing. And one of those big things when we're working on lag is understanding where the club head is, our hands, and then something else in relationship to those.

So that may seem a little bit difficult, but stick with me here. It becomes very simple very quickly. So what I'm going to do is I'm going to put a line right on my hips so we can think about this being our belt line, and we're going to learn lag from a half swing so that we can put it into a full swing.

You can see I can do this while curling my ankles down. I can do this while cupping. Ideally, we want to curl those knuckles down while getting this lag so that we can come in with a square face like we talked about in the move section on the course. But if we get the club had to go up, then it's easy to see where we don't see.

This is when the hands are about parallel or so, or the hands are here and we move the hands forward because what appears to happen is the club head doesn't do anything at all. So that's some of the trickery in our mind that we don't see. So you can see here, if my hands don't move forward, we can see the club head go up.

If my hands do move forward, we don't see that club head move very much. That's the subtlety of lag, and that's one of the big starters that I'm having a ton of success with my students on where they're getting this sensation of lag in the downswing so we can utilize understanding where the hands are, where the club head is, and how that works.

So now that we understand how this is going to work, so we have our waist, our line on our belt line, we've got our club head here. We know this club head is going to go above the belt line as the hands are going forward. So we're going to be getting this little lag move in the swing. Once we have that sensation, now we can start throwing that into some swing.

So I highly recommend starting with some dry swings here. First, go up to the top as a hands go forward, get that club head to feel like it stays above the belt line as we in turn and you're going to see that we can start to develop some room to get some forward shuffling get that easy speed. There's a lot of great things that happen from this, but we're going to focus in on the lag.

So we're going to go here. As the hands come forward, the club head is going to feel like it goes up. And now the good sensation is feeling like this club head stays above the belt line as long as it can. You'll see it unless you if you don't hold it, that club will kind of naturally want to unload into the ball.

So let's head a little shot like this. We're going to get the the club head to feel like it's going above the belt line. As the hands are going forward. So we can see there. Nice lag on the downswing and compression. Now, the cool part about this is now we've got a good grasp on how we lag the club in a half swing.

Then up at the top of the swing, it's going to be squaring up same exact move. Now, let's do one more little half swing and then we'll show you how we do it here in the full swing. I'm going to get that sensation that the club head staying above the belt OK, nice little compress draw right there. Very, very nice.

Had a lot of lag, got a lot of energy into that ball. So that ball carried 100 something yards and I barely swung at it at all because of the lag that we can put into it. Now, just a quick bonus, just because I'm thinking about it here real quick. It's also a great shot to learn while you're training this you can see you can it really low.

Nice shots out of trees if you need to. But if you do this next move correctly, you're going to be in the trees a lot, lot less. So we're going to take that same sensation hands moving forward. We're going to go up to the top of the swing, had that club lag nice at the top, just like we did in the half swing.

Now that we have a good understanding for it, and utilize that nice, easy speed, it gives us So as you can see right there, I tug that one just a little bit, but two of nine carry distance to 28 that was absolutely pounded I tell you what, when I start working on and I'm doing instruction on lag, it's unbelievable how much my numbers go up.

I should probably work on this a lot more myself, but that speed is just ridiculous. That's a lot more than I normally try to hit this club on the course. But I'm telling you, when I'm doing this right now, I can feel how that lag is releasing into the ball. And I'm telling you once you get a good sensation for this, you're going to feel the same thing.

I see this with students every single day when they send me an email and they're like, Wow, I can't believe how much further I'm hitting the ball because of how much energy this transfers into. So let's go out and try this one more time, see if we can get a nice straight one now. There we go. Nice, solid shot here.

Started right on my target line. Just made me 15 feet ish left of my target. It's looking pretty darn good, especially with a seven iron. 220 total carry doesn't get much better than that. Now, this lag drill is obviously going to help jumpstart your effortless power into your into your swing. But if I was actually able to see you with my own two eyes like I do with all my other online students, I'd be able to help you get to this point very quickly.

Well, also, making sure we're getting our foundations in place that allow you to do this every single day. And this is why my students progress so quickly, is because we can go over things like this while having other pieces in place. So, for instance, if I get my my club to shallow out and square up properly while lagging this, it becomes much more simple to hit nice, effortless, hard shots like this.

So if you are seeing this video and you're interested in possibly working with me one on one, you want to check out the button below this video that's going to take you to the page. You'll see if I have any spots still available if you're seeing this video, that means I do have spots available, but they do tend to sell out very quickly.

So if you see that the spots are sold out, make sure you join the waiting list to get notified next time. I do open up spots in my review group. I look forward to possibly working with you and I'll see you here soon. 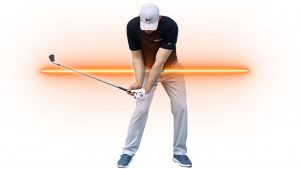