Why You Need This: Today, you'll discover "The Shallowing Debate | Should You Shallow the Golf Club?"

Whether you know it or not, you're shallowing the club at some point in your downswing.

But when I say that you need to shallow the club...

...I'm really talking about "when" you need to shallow the club for the most consistent results possible.

A very common issue is that most wait and shallow the club late in the downswing...

...and then have to make compensations to get the club delivered to the golf ball.

This generates a lot of wild inconsistencies (like blocks and pulls).

By shallowing the club early in your downswing, it allows for a LOT of good things to happen.

In today's video, you'll discover what these good things are and how shallowing early allows them to happen...

...and I'll show you my "Bucket Drill" that will help with the proper arm rotation to get you shallowed early in your downswing.

Once you try it out, I'm guessing you'll be hitting with more power AND more consistency.

Clay Ballard: All right, the great shallow the debate. Should I be shallow? Should I not be shallow? Why does it matter? What about players like Phil Mickelson that aren’t quite as shallow?

One thing to really realize that a lot of people don’t, is everybody shallows at some point in the downswing.

If I shallow early, and I get this club pointing somewhere down in the general vicinity of the golf ball, now I can rotate through. The club’s already on plane. It’s where it needs to be.

If I start down a little steep and my left wrist gets a little bit cupped, I start to pull down with my hands, my hands tend to go this way and kind of pull the club in.

Everybody, even players that start down steep, shallow the club out but it doesn’t happen until later in the downswing.

So basically, with anybody, everybody shallows the ball, or shallows the club, some point in the swing. The players that shallow it earlier, in my opinion, have an advantage because now they don’t have to feel like they have to get the club on track.

The players that shallow it later start down a little steeper, they have to get this club back on track in the downswing.

Now, that momentum of the club kicking inside can make it really easy to block shots. A lot of times I see players maybe struggle with their directional control, struggle with control of their driver if they’re starting down a little bit steep.

If you’re blocking it to the right, if you’re feeling like that club gets stuck in behind you, this can be a great tip for you. So that’s what I would say. Everybody shallows.

I would prefer a player shallow early, that way we can get the club on plane, then you can just go ahead and rotate on through there, swing as hard as you want to, and you don’t have to make some compensations to get the club back on track.

All right, so I’m joined here with Top Speed Golf Certified Instructor Quentin Patterson. He’s going to read me some of the FlightScope numbers.

Now, when you have this bucket here, as you go to the top of the backswing, what I see players doing typically is rolling the club inside and then rolling it on top as they start down.

Dragging the club inside, and then it starts down steep, we shallow late. Let me try to do that. I’ll be honest with you, I’m not the best at steepening it up.

I have quite a bit of shallow in my swing, so I struggle to get it really steep, but I’ll do my best to try to get that bucket rolling in and then on top like that. Let’s give it a whirl.

Yeah, for me, I feel like once that club starts going even a little bit this way, I completely lose control of it even though it didn’t happen very much in that swing, it feels to me like this club face just disappears, I have no idea where it’s at.

Quentin Patterson: So the ball went about 160 yards total, and only about 81.7 club head speed.

Clay: Yeah, so for me when I drug that in and then got this way, I had to really slow down to get everything back on track. That’s a pattern that I see with players all the time.

Now the solution to that is on the backswing, I actually want you to feel like your hands stay this way. If I had this bucket, you could imagine this being level.

Imagine where these handle attachments are on the side. If I’m here, I would be my right hand on top of my left hand.

You could even take the bucket this way and say OK, I’m going to be pouring water out of this bucket as I’m going back.

As I start my downswing, then I’m going to turn the bucket to the right. That’s that shallowing move. That actually happens at the end of the backswing and the start of the downswing to get that club really in the slot.

Then as I come on through, I can go ahead and release it. Let me show you what that would look like with a golf club.

So again, this is the bad motion, rolling it inside, steepening it up. I want to feel like I’m pouring the water out in the backswing. That’s going to keep my club a little outside my hands.

Then from there, I’m going to let that turn back in in the downswing. So it’s a downswing move, that’s where a lot of players struggle with this.

They try to shallow it out in the backswing. It’s actually an end of the backswing, beginning of the downswing move.

Now once I do this, and I get that club on plane at the start of the downswing, now the butt end of my club should be pointing somewhere towards this golf ball.

Once I get it pointed toward that golf ball, now I can rotate through the shot as hard as I want to and I’m going to be able to hit a pretty straight shot. My club’s already lined up to the golf ball.

I can rotate on through as fast I want and I’m going to be able to make pretty solid contact. Let’s go ahead and try this one out and see how the numbers change.

There we go, wasn’t even the best hit shot. Maybe five feet or so left of where I was aiming. A little bit thin, but because everything was on line, I really got away with it.

That would be a shot in the middle of the green. So what’s the numbers on that one?

Clay: So picking up what, almost 20-something yards…

Clay: And what was the swing speed?

Clay: So I was able to swing 15 miles an hour faster by shallowing that club out. So again, I want to feel like my bucket is here. As I finish the backswing and start the downswing, the bucket is there.

Then from there, again, I can go ahead now that I’ve got it in the slot, I’ve got it from the inside, I can swing as hard as I want to and I don’t have to worry about rerouting the club. Let’s go ahead and try one more out.

There we go, really solid on that one. Almost the exact same line, maybe five feet left of where the FlightScope’s lined up. What are the numbers on that one, Q?

Clay: So not going to hit it a whole lot better than that.

Now there’s still one problem with this. A lot of times what I’ll see players do is they’ll take this bucket, they start to shallow it out in the backswing and now this bucket’s turning to the right.

Then they leave the bucket there the entire downswing. That gets you shallow and a really good slot in the downswing.

So I’m in here, I’m shallowing the club out, but if I keep on rotating there, look at where that face is. That face is a mile to the right. You’re going to hit weak blocked slices when you start to shallow it out, if you do it that way.

Now what the pros are doing is they’re adding a second piece to this. Not only are we shallowing it out, but we’re also squaring up the wrists.

More importantly, in that entire Move section, I walk you through exactly what you need to do from start to finish to get that club shallowed out, to square up the wrists the right way, so that you can hit that nice draw every single time.

There we go, and that is a laser-straight, that ball’s wanting to draw against the wind. I couldn’t hit it much better than that.

So after watching this video, after doing this bucket drill and getting the club shallower, go over to The Move section. Follow those videos step by step.

It makes golf so much easier when you have a shot that you can depend on.

So best of luck, after this video head on over to The Move section, and I’ll see you there.

C105. Untaught Secret to Stay in Your Posture in The Golf SwingPublished: Jun 27th Get Access Now! 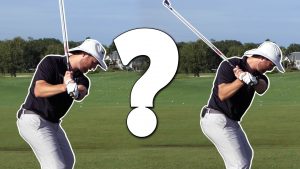