Why You Need This: Today, you'll discover "The Key To An EFFORTLESS GOLF SWING | Teeter Totter Drill"

…and, you’ll discover the key concept you must get right in order to have an effortless swing.

Plus, I’ll show you my “teeter totter” drill that’ll help put it all together!

That's as simple as the sequencing can get as far as describing describing it. All right. So the best way to get this feeling is to do a drill that I call the teeter totter drill. Now, you may have seen some things like this online, but you don't have to have one of these to do this drill. It just makes it a little bit easier to feel it and understands actually what's going on.

So if you want to make one of these, it's very easy. We made we did. This is a DIY job right here. We just took a piece of a One by 12 Oak. I recommend using a hardwood. It's just going to be more rigid. If you use a hardwood, if you use a flimsier wood like pine or something like that, it might bend a little bit on you.

But if you don't have as much weight as I do, it may not be as big of an issue. And then we took a one by one, screwed it to the bottom in the middle there. And then we actually you don't have to do this, but we took some door stoppers and put it on the sides there, and that just makes it so you have something to push against.

You don't feel like you're sliding down it when you're pushing it back and forth. So what you're going to do is you're going to step on this. And in the setup, what I like to have players feel as I like to feel like they have more pressure on that lead side to start with. And the reason for that is it makes it easier to shift that pressure into the trail side.

And in my opinion, it's a more powerful athletic motion to do that now. You can start out very, very balanced and imagine the teeter totter is level here, and I'm balanced on this and shift the pressure that way. But you're not shifting as much pressure that way. So it's just not going to be as powerful. But you can play around with it and see if that works for you.

And then also you can start with the pressure on your trail side as well. Already have it there. But again, it's not it's not shifting that pressure to me. It's not as powerful, athletic, but to you, it may feel a lot better so play around with that set up position and see what works best for you. But when we look at majority of tour players, you know, by studying, you know, the pressure graphs that they have, you probably seen those pressure mats they standing on.

They stand on, you know, in studying those, I've seen that most of them are going to start with a little bit of pressure, a little bit more pressure on that lead side. And that allows them to transfer that pressure into the trail side. So that's number one. We want to start with our pressure forward and then before the club starts going back, right?

So before there's any movement of this club, we want to shift that pressure and I want you to feel like you're pushing this end of the teeter totter and pushing it into the ground as hard as you possibly can. That's what you want to feel like. That's going to make it as powerful and as athletic as possible. So I'm here and I'm pushing into the ground as much as I can.

So as I mentioned before, the pressure or the force precedes the motion. So I need to be getting pressure into that lead foot before this club starts going down. So the only way that I can do that is to start shifting pressure toward my lead side. And start recentering that as I get up to the top of the swing.

I'm not I may not have it on there. It's typically going to be recentered. I'm going to be closer to level as I start my downswing, but I have to get that pressure moving from there to there before I start the downswing. If I go up to the top of the swing and I don't start to shift any pressure from there, I'm going to start that downswing and by then it's too late.

And that comes from getting that pressure into that lead foot before the downswing starts. So that has to happen in the last part of the back swing to be able to do that. So just in slow motion, it's going to look like this, shifting the pressure. And then as I'm getting up into this area, I'm starting to recenter it as I get up to the top and then I get that pressure in the left foot, I'm going to keep increasing that pressure all the way to impact as I come all the way around and I come around and to the full finish.

So if you have one of these you can work on doing that sequence and do it really slow like I just did there, and then start to build up the speed little by little by little. Now, as you get more and more comfortable with that, obviously we can't have this on the golf course, so it's not going to do as much good, right?

So let's see if I can kind of put it all together here and see if I can get a good pressure shifted kind of swing here Now, one thing that is critical for this that I didn't mention is getting a good turn in the back swing that's so important for sequencing the swing correctly. You see, if I don't get a good turn and I just lift up my arms like this, I just don't have enough time to be able to sequence my swing correctly.

There's just not enough time to get that pressure into the lead foot before I start my downswing. Not to mention that, but I just don't have a lot of space to be able to create speed in the downswing. So the bigger turn I can get, typically the more effortless the swing I can have. I mean, look at players like Fred Couples, Ernie Els.

These are considered, you know, the smoothest swingers of the club out there. They all have good, powerful turns which allows them to sequence the swing correctly. So if you want to learn how to get that big turn, I highly recommend working through the power turn course. That's one of the major pieces of the Top Speed Golf System, and this is going to allow you to get this correct.

So if you want to work through the power turn course, work through level one, level two, level three, click the instruction tab at the top of the screen. And then go to the Top Speed Golf System, go the power turn, work through those levels, have a nice, powerful athletic swing and start on the ball longer right now. Play well, talk to you soon. 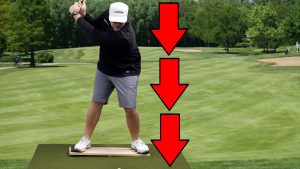