Why You Need This: Today you'll get "The Game-Changer Right Wrist Move for Hitting the Ball Solid"

If you've been searching for ways to make more solid contact with the golf ball...

...today's drill is exactly what you've been waiting for.

I'll give you a simple trick using a notebook...

...to give you immediate feedback on whether or not you're using your trail wrist correctly in the downswing.

So, if you're ready to start compressing the heck out of the ball...

...rather than flipping and losing tons of distance...

I’ve got a simple trick that you can do with a notebook, a folder, an iPad like I have here, really anything. I’m going to show you the right position and the wrong position for the right hand.

It’s realy going to change how you deliver this club through impact, how you feel like you’re really compressing the golf ball rather than flipping.

So if you have trouble feeling like you come out of your posture, your hips move toward the ball. You throw the hands and arms at the golf ball. Maybe you don’t have that forward shaft lean that you want.

Maybe you don’t really feel like you’re hitting down and compressing the golf ball, hitting the ball and then taking that nice divot in front of it.

If any of those things sound like you, this is really going to be a game changer for you, and it all ties back into how you properly move the right wrist in the golf swing.

I can’t wait to share it with you. I have a couple secrets to this, specific ways that you do this, that are going to make all the difference in the world.

All right, so let’s talk about what’s happening in a bad golf swing, essentially. If I’m throwing this club and losing my lag here, I’ve done this before, everybody’s done it.

Every single player that’s ever picked up a club did this at some point and hit a bad golf shot. We had to learn how to get this club lagging and to get the hands in front at contact.

So when that cast is gone, or that lag is gone and we’re casting a little bit, if we look at the right hand, there’s two things that are going on.

So the hand is going into what would be wrist down, ulnar deviation, kind of like I’m casting a fishing rod. The rod’s already cast here, that’s the first move. I’m exaggerating a little bit.

But that’s exactly what’s happening, to a smaller degree.

It feels really powerful, that’s why everybody does this motion. Because if I’m trying to hit the golf ball that way, and I’m right-handed, it feels like I need to hit that thing by casting this club and pushing it forward with my right wrist like that.

Even though it feels powerful, it actually slows down your club head speed because when I cast it, it’s moving too fast back here and actually decelerating as I’m coming into the shot.

Here’s the difference, here’s what I want to have happen. In a good swing, I want to have this right wrist angled back, that’s what’s called wrist extension.

I want to have it angled back as much as I can at that point in the swing, kind of this last parallel in the downswing.

I also want to have my wrist into what’s called radial deviation. I want to feel like instead of my wrist being down, I still have it up like that.

It’s those two moves together that make this happen. When I’m there, now I want to go ahead and release this out in front.

If I do it the right way, my wrist is angled back in the wrist extension, and up in the radial deviation. You’ll see that my iPad, the face of it or how I would be reading on here, would now be pointing down to the target line.

So you want to feel like your right hand is coming down the target line, the palm of your hand is going to the target line all the way through contact, and then you let it release.

That’s the big key there. That right wrist needs to be facing the target line all the way down, and then it has the throw.

The last piece is actually really simple, I have a great tip for that, too. But that’s going to feel like I’m smacking that club like throwing that club through contact like if I was smacking my hand here. I’m going to go ahead and let that release as I’m coming on through.

So if I was tossing a golf ball, let’s imagine I was going to toss somebody 15-20 feet in front of me, that’s exactly what you would do anyways.

You would have that wrist kind of angled back. As your body opened, you would then go ahead and release it.

That’s exactly the same thing we’re trying to do in the golf swing, have that iPad facing back toward the target line, and then from there, go ahead and flip and let it go.

Most players that make this mistake either hit early and flip it, or if they do try to have that wrist angled back, they forget about letting it go and they lose all their speed, they just try to hold on.

I don’t want you to hold on, I want you to go ahead and let that wrist fly down the fairway.

So if you’re doing this right, the right wrist to you should feel like my palm is angled back toward the target line and as I open my body, I’m just tossing the club down the fairway.

You’ll see how now when I mention that, if you watch me swing, it will look a lot like that when I make a golf swing. Let’s go ahead and give it a whirl.

The speed all comes through contact now rather than prior to contact like we had before. Now there’s one thing that’s really going to help with this.

So we get this position where now our hand’s facing back, we’re really feeling like I have a bunch of lag, and I’m getting rotated through contact. But what can really help you to add a lot of power to this is the Power Turn.

Now that you’re in this good position, you’re in a more powerful position in the downswing, let’s add some more speed to that by getting loaded up better, really making a bigger body turn.

Then from there, I have the one-two punch. So now my club is in the right position, I’m releasing it out in front getting that speed.

If I learn to make a bigger, more free-flowing swing, I can now hit it really far and really, really compress it. It’s one of the easiest ways to start adding more and more speed to this great impact position.

So don’t stop here on this video. Go to the Power Turn section. Click on the Instruction tab at the top of the home page, go to the Top Speed Golf System, and then work through that Power Turn.

Man, that’s going to help you to really add some swing speed to this. As you start going through level one, level two, level three, you’re going to be going faster and faster and the best part about this, is you don’t have to be flexible at all.

I give you all the tricks even if you’re not flexible, how to get more club head speed. All you need to do is follow the drills, you don’t even have to think at all, you just do the drills, and you’re going to get better.

So I can’t wait to see you there, and I’ll see you in the Power Turn soon.

C109. How To Stay In Posture And Hit It Pure Every Time Using This Simple DrillPublished: Oct 20th Get Access Now!

C108. The #1 Reason You Don’t Stay Down Through Impact | So Easy To FixPublished: Oct 3rd Get Access Now! 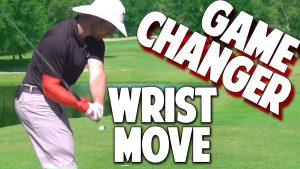