Why You Need This: Today, you'll discover "The First Move To Start The Downswing"

TSG Instructor, Michael Derr will give you an unusual hand move to begin your downswing...

...that will both shallow your club AND square the club face!

What's going on, Michael Derr, Top Speed Golf Certified instructor. Now we all get to we've all gotten to the point where we're on the range and we can make a slow motion rehearsal. Exactly the way we want to do it. You know, we get up here, we shallow the club out real nicely. We all know we want this club to shallow out into the slot.

We want to square it up into impact. But then you go to swing, and the first thing you see is we steep in this club out. Now, the the problem with this is the practicality of the slow motion rehearsals. If we can get the right reference points and we can work on the right mechanics, then we can start to apply what we see in the rehearsals where we see this club shallowed

So when we are rolling this club down, everybody, we're simply doing a very simple move where we're flexing our forearm. It's almost kind of like we're trying to flex or forearm just to show off the muscle in our forearm. But that's the bowing of a lead wrist, which is going to help us square it up. Now, that is going to help us when we get into impact.

We can square the club, but when we reference the club head staying, let's say behind my back or the outside part of my body, and we feel like this club splits the body. Now we have the shallow as well. So a lot of a lot of players, when they go to the top, they might get this wrist a bow, but when they start coming over the top, they're going have to stand up and kind of flip at the ball.

And we'll again, we're going to be getting into that in one sec. But we have to get to have the relationship between the club head and the bottom of the club rolling down our body. So this is simply going to split my body on the way down as I'm bowing and flexing that form, squaring up the club face.

So once we get a good feel for that, we are going to start throwing it into impact. We're going to go to the top, we're going to have everything split the body. Then we're just going to kind of open up into a follow through. Kind of little half easy finishes up. We're going to roll down. I know this is correct because the clubs on the outside, but into the club is on the inside and we're going to turn through the shot.

So we're going to come up and you can see I'm actually feeling this happen as I'm opening up. So once we get a really nice feel for this club splitting our body on the way down and we're rolling at the same time, remember, we're not just dropping. We want to get the logo of our glove pointing down towards the ground as we're shallowing this out.

If we leave this up, then we're kind of into Flip City, and that's going to be the only way we're going to be able to square up the club. So again, I'm rolling it down all in one motion. Once I get pretty comfortable with that, I'm going to hit some nice, easy shots where I start getting that same sensation so you can see it's going to come out nice and low.

So once you get a really good feel for these easy swings, then we can throw it into action into a full swing with the same sensation. You can do this all the way to the top, but I always recommend starting off with some easier swings and working yourself up gradually so you can catch up with the feel. So let's give it a go here.

OK, so pretty solid, but I left it a little bit off to the right. So this is another beautiful part about this feel this application to shallowing out. I know from that swing that I didn't roll this wrist down enough. I know I shallowed it out nicely, but I must have not let the logo roll down too much.

So what I'm going to do on this next one is overdo it just a little bit and it should give us a little bit more of a draw so there we go. So I got that ball to turn over a little bit more just by utilizing what we talked about. I got this club to roll down. I made sure the logo on my glove was facing more towards the ground.

So I knew that I could come in through impact and square that club up. So that's just the first piece to the equation. A lot of the times you're going to get this club to shallow out beautifully, you're going to get it squared up, but you're so used to flipping at the at the ball that we don't know exactly how we want to get to impact so what I'm going to have you do is go over to the straight line release course, and that's going to show you exactly once you get this beautiful shallow move and this club square and up exactly how we're going to get through impact from that position so we can

start standing up and flipping and start releasing it out in front just like the pros do on every single swing. So head over the straight line release course. Make sure you check out at least the first couple of videos in there, because they're going to go over a lot of great detail on how to release it. And then once you have a good feel for it, go through the rest of it, pair up, shallowing out, squaring up the clubface, releasing it out in front and you're going to be compressing the ball and getting those balls to start off right, left, straight, whatever you want, as easy as it has ever been.

So I'm excited to see you over there. Let's see in the straight line release course. 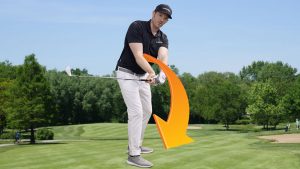