Why You Need This: Today, you'll discover "The Best Way to Shallow the Club | Finally!"

If you're one of the many who struggle to shallow the club in the downswing...

...then I know how frustrating it can be.

But, today's drill is not like anything you've seen before...

...and it's going to show you the proper feeling of shallowing the club...

...and even help you understand the crucial pieces you MUST do once you get the club "in the slot" in the downswing!

Clay Ballard: Now I know you’ve been trying to shallow that golf club. Everybody’s trying to do it. All the pros are doing it.

If you’re sick and tired of being kind of steeper and over the top, if you want to get that club shallowed out and from the inside, square it up, really feel like you’re just in the slot in the downswing, I’ve got the drill for you here.

Now, the problem I see with many players that have struggled with this for a period of time is that we’re trying to ease into it a little bit too much.

It’s actually a couple things that have to happen when you shallow this club. So when I get this club more here, the club shaft gets shallower.

If I get much more shallow and I close my body off like a lot of players do, I don’t open it up, then I’m going to be way from the inside and I’m either going to block it way to the right, or I’m going to release my hands and I’m going to snap-hook it to the left.

If you’ve been struggling to shallow the club, it’s one of those pieces is missing. When you try to shallow it out, you’re not having the other pieces that tie in with it.

Now here’s a great way to get you over the hump once and for all, to get this thing that everybody’s wanting to do.

I want to really, really exaggerate it and then start with slow swings. Preferably not over 150 yards of water like we’re doing here, you just do this on the driving range.

You could even start with a middle iron if you felt more comfortable. Tee up a middle iron. I want to really, really exaggerate it.

So I’m going to go to the top here, I’m going to start about halfway down. Instead of being kind of in the slot where we want to be, I want you to take this club and point it all the way parallel with the ground. So we’re way in here.

Now I don’t want my shoulders to be flat like this, I want them to be tilted in my posture still, but I want that club to be all the way flat down to the ground like that.

That feels crazy. From there, you’re going to start to sense the two things that I talked about. If I don’t open my body up, there’s no way to get this club back squared up.

If I go from here and I just kind of keep my body closed, it’s going to be so far out there it’s not even going to be funny. So automatically you get that sensation of OK, now I see why the pros are opening their body like that.

Number two, you’re going to feel like you really have to release the golf club and get that face to go.

Let’s start with the first piece here. I’m going to go to the top. I’m going to really get that thing super flat about half way down.

Then from there, I’m going to do a couple little half practice swings figuring out, OK, what would I have to do to get that club back on a square plane and down the fairway straight.

If I do this and stand up, there’s no way to get it back to the ball. I have to keep in my posture and rotate there. So my legs are staying bent, and I’m staying in my posture. This is not going to work at all. I have to do this to bring it back out there.

So let’s make three or four swings to be able to make that happen. So again, halfway back, or halfway down, excuse me. Very, very flat. I’m feeling that a few times. Then I’m actually going to hit a ball from there.

There we go, and it may be terrible like that. It may be a just awful shot. That one was a hook to the left, got over the water, thank goodness. But I’m not worried about how well I hit it.

I’m worried about trying to figure out a way to get my body to open, to stay in my posture, to be able to deliver this club.

Now we’re never going to be in this position, but if we feel like we’re shallow and we’re here, when you feel like you’re here, you’re actually going to be on plane. It’s a little bit of a brain trick, and you’ve really just got to exaggerate it.

Again, halfway back, super, super shallow, and then I’m feeling how would I have to move my body different than I normally do to get that to happen.

That one was dead straight, right down the center of the fairway. I actually hit pretty hard for what felt like a little half backswing.

Now I know I may have gone a little farther back. I know I may not have had the club as shallow as this, but again, that’s the feeling that you’re going to have.

There’s one more piece. You have to be able to square the club face up in the right way. So if I get from the inside here, I get flat and I rotate my body. Again, if I don’t square up that face the right way, that ball’s going a mile to the right.

So if you’re used to squaring up the face by standing up, casting, and having the face square up now by that, because that face is square now, then this isn’t going to work. We’re never really going to be able to get shallow.

We have to learn to square the face the way the pros are by keeping the handle down. That way, you can get from the inside, you can turn as hard as you want open and it’s still going to be that nice, tight draw.

That’s exactly what I show you how to do in a step-by-step system in The Move section. Now it’s just a handful of videos, but if you go to the Instruction tab, Top Speed Golf System, go to The Move, I really want you to pay attention to a couple drills in there.

Number one would be the Tennis Racket Drill and really square up the face the right way like we’re talking about.

That idea of the Tennis Racket Drill, you may hear me talk about that a lot. That’s just because of how important it is.

Most players I see start to flip the club and really release it this way to square the face, and again, you’re never going to get shallow doing that. We have to learn how to square the face up the right way like the pros are doing it.

I also give you some great tricks on what to feel with your body and how to feel like you’re swinging more out the right but not have the ball go to the right, and we’re working through this course.

So start with this video here today, and then head over to The Move section.

Work through the small series of videos there, and get to where you feel extremely confident on the tee that you can swing as hard as you want or as easy as you want, and that ball is going to start down the middle of the fairway, and it’s going to draw back.

You’re going to feel very confident that can happen. Best of luck, I can’t wait to hear about how much better you’re shallowing the club.

I’ll see you in The Move section next. 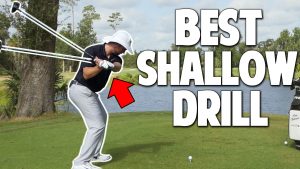