There’s a great drill that can get you that extra lag you’re looking for, but most recreational players perform the drill incorrectly...

With one minor adjustment to the drill, many of our students who struggled to get lag in the downswing wound up finally adding a ton of lag...

… which will add more speed and distance to your game!

One of Quentin’s students worked on their lag with this drill, and wound up adding 50 yards!

In today’s video, you’ll find out what that adjustment to this common drill is…

… and you’ll see how much extra lag and distance is added to your swing.

Quentin Patterson: All right. I will definitely take that one. Right in the middle of the fairway, there.

I struggled with this, and I have a lot of students that struggle with this as well. They’ve tried everything to get lag in their swing, but no matter what they did, they could still never get lag.

Well, conceptually that drill, it’s great, but almost nobody does it right including myself. When I first did this drill, I never did it right.

See what most people do, is they’ll initially go out wide in the backswing, but as they get up to the top of the swing, they’ll get narrow.

If you go up to the top and you fully hinged your wrist, you’re going to want to completely unhinge and cast the club in the start of the downswing. That’s exactly what we don’t want. That’s the opposite of lag.

If we want to get lag, we actually need to get those wrists reaching their full hinge as late as possible in the swing.

That’s why I’ve actually made an alternative to this drill, this wide-narrow-wide drill, which I believe makes it the best lag drill of all time, because I give it to students who’ve worked on getting lag their whole life, their whole golfing life, and have never been able to get lag.

They do this drill, they get lag for the first time. So I’m excited for you to be able to try this out if you’re struggling with lag yourself, or if you just want more lag in your swing, I believe it will help you as well.

The difference that I made with this drill is that I actually added a wide to it. If we have the thought that we go wide and then wide in the start of the downswing as well, so we’re going wide in the backswing, so zero wrist set.

If you have this feeling, that’s the reality of what you’re going to do when you speed this up, but that’s the feeling that you want initially when you’re doing this drill.

That’s going to allow you to get that sharp angle of lag as late as possible in the swing, which is what we want for speed and distance and everything else.

Let’s get about 10 of those in, where we go wide, wide, narrow, wide. That’s what we want to feel is going on.

Technically, you kind of are, but that’s what we need to feel to be able to get that sharp angle late. Otherwise, you’re going to be hinging that wrist too early and then we’re going to want to unhinge it right away.

Now we can start adding some fluidity to it. Now what we want to do, and I’d set up the camera for this. Set up a camera from face on and see if you’re actually doing what you feel like you’re doing.

I’m going to try to go as slow as I can, but if you have this concept, it’s really going to help you to get this angle lag. We’re going to go wide, wide, narrow, wide.

As you see there, I got a ton of lag when I did that. Now it probably didn’t look like I did this in the start of the downswing, but that’s what it felt like to me.

When you speed this up, it’s going to feel like you’re doing that, but when you look on camera, I think you’re going to be surprised to see that you’re getting that angle of lag to really sharpen as you’re coming down.

So again, I’m going to do a practice swing here, nice and slow, and I’m going to go wide, wide, narrow, wide.

It’s going to look like this, so you probably I had a ton of lag there. A ton of lag, really, really sharp angle late, and that’s what we want to have.

So once you start feeling comfortable with the slower ones, I want you to speed it up. Let me see if I can do a more speeded-up one here.

I’m going to go wide, wide, narrow, wide again. A little bit faster, yeah. So that felt, you really feel that woosh through contact, through the impact zone.

That wasn’t a lot of effort. I didn’t really feel like I was exerting myself very much there. I felt like it was about the same effort as I would take if I was trying to hit a nice, easy drive down the middle.

But you can feel that woosh of speed that you may not have had before. So get some of those full speed ones in there. Get up to full speed with it, look on camera, see if you’re getting that nice sharp angle getting late.

Then once you see that on video with your practice swing, now let’s try to add the golf ball and let’s try to get that same feeling.

All right. Got a couple more miles per hour there. I’ll definitely take that one.

Now that we have that nice angle of lag in the start of the downswing, we have a lot of potential to get a lot of speed and distance.

But we still have a problem. We need to learn how to release that lag properly so that way we get the most out of it.

Now, these aren’t typical results but it shows the potential if you get this lag and this release of the club properly.

So that release of the club that I’m talking about is the Straight Line Release in the Top Speed Golf System.

Once you get this lag correct, I want you to go to the Straight Line Release course and start getting that club, that butt end of the club to turn back up and in as quickly as possible through impact so that way you get that nice snap, that nice whip of acceleration through impact to get you all that effortless speed.

Work through level one, level two, level three. Make this second nature, so that way you walk out of the car and you’re just whipping that club easily through contact without a lot of effort.

So keep up the hard work everybody, play well, and I’ll talk to you soon. 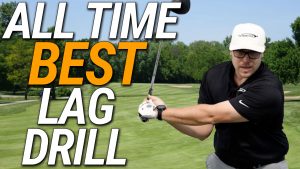