Why You Need This: In this video, you'll discover if the A-Swing is for you.

David Leadbetter has popularized this new method; so, let's take a closer look.

As with all swing systems, there are advantages and disadvantages to the A-Swing.

In the first part of the video, you'll learn what the A-Swing is all about.

The swing starts by taking the club on a more outside path with the club pointing right of the target at the top.

As you start the downswing, the club shallows out quickly.

This is really good for helping players that are coming in over the top and slicing the ball.

The problem with this extreme action is that it's really easy to overdue it and start to flatten the club way too much, which will cause you to block the ball.

So, that's why I prefer a more parallel plane.

A parallel plane is more repeatable because you don't need to make a huge adjustment from the top, as you would in the A-Swing.

The A-Swing is meant to help correct coming over the top in the downswing, to get players to shallow out their club and plane.

It'll help teach players to come more from the inside.

However, I don't recommended the A-Swing for long periods because it may lead to some bad habits and inconsistencies.

In contrast to the A-Swing, the Top Speed Golf system focuses on the 5 most important moves in the golf swing.

Every professional golfer performs these 5 moves during the golf swing to get more power and consistency.

Watch this video now to discover the advantages and disadvantages of this new swing method...

And compare it to a more repeatable swing such as the Top Speed Golf system.

Hi guys, in this video we’re going to talk about the A-swing. This is a very popular swing out there right now, David Ledbetter is kind of the inventor or the instructor with the A-swing.

It’s a little bit of a different type swing out there, and I want to kind of go over it. There are advantages and disadvantages to any type of swing methodology that we’re talking about. Whether we’re doing stack and tilt, the Top Speed Golf System, the A-swing, whatever you’re talking about.

I like to give things a fair shake. I’m not going to sit here and say Oh, that’s a…you hear people say, oh, that’s the stupidest thing I ever heard in my life. Well, there’s advantages to everything. There’s a reason that somebody comes up with these types of methodologies.

But I think it’s really important to be clear, and kind of understand what those are as we start to hear those, so we don’t get lured into things thinking that there’s going to be kind of a magic type of a move and get away from developing good, solid fundamentals.

With our Top Speed Golf System, it’s based on the five moves that basically every good professional golfer does to get power and consistency, and we go over those.

A-type swing, I’ll go over what it is here in a second, but really, they don’t market it this way, it’s not talked about this way, but really what it is, it’s to combat an over the top swing, it’s to get players to shallow out the club and to start coming more from the inside.

I like certain parts of it, but I really don’t like other parts of it, because I think it could lead to some pretty bad habits and some inconsistency. So let me go over this.

For those of you aren’t familiar with the A-swing, what this says is basically we’re going to take the club up, it’s going to almost move in a straight line. So if you can imagine a ferris wheel kind of moving up to the top of the swing, that club’s going to stay outside my hands in the take away.

As I get the top of the swing, the club is going to be pointing to the right slightly, and then as I start down, then the club’s going to start to shallow out.

Now let me explain what happens to the club and momentum in any swing. So if I can imagine, let’s imagine that my club is pointed this direction. I’m going to pull on this club shaft, kind of parallel to my target line here.

That’s what’s happening at the top of the swing with an A-swing. So we’re taking the hands back inside the club head, the club head is outside the hands at the top. I may not be demonstrating this perfectly, I don’t use exactly the details of the A-swing, it’s not something that I do myself.

The players that tend to do better with this, our players that have ben coming kind of inside and looping it over the top, have the big over the top swing. Well they start to feel they do this and shallow it out, that’s the exact opposite of what they usually do.

So for a lot of players, they first start to do this, they maybe feel pretty good. They’re getting a little bit more to the inside for the first time in their life as the club is shallowing out. But what happens with anything that gets this kind of extreme in my opinion, is that eventually we start to overdo it.

We get away from that inside takeaway, we start over dropping this club in, and now all of a sudden we’re coming well inside out to the right. For those of you who are trying the A-swing, you may find yourself all of a sudden hitting a lot of shanks as my club gets too far to the inside, and now my hosel’s working the club.

We may find a lot of blocks to the right for professional players, good players that are doing this. As my club drops so much to the inside, flattens out so much, that now I’m swinging out to the right and I’m blocking it. So that’s a pretty typical thing that happens.

There are advantages to it, players that tend to go inside and over the top, this is basically a swing that’s exact opposite of that, and it could have a short-term advantage to getting the club more inside.

But as we start to overdo this a little bit, we can start to get stuck to the inside, block shots out to the right, and it’s very easy to fall into that type of pattern.

What I recommend, is basically what’s called pretty much a parallel plane. So as you’re coming to the top of the swing, if you can imagine drawing a line from the hosel of my club up through my elbow, as I go to the top my club’s basically going to be parallel to that.

Parallel plane, or something similar to that, is what I particularly think is the most repeatable. I do think it’s OK also to get a little bit more vertical, or a little bit flatter. It’s not going to be the end of the world if we get a little bit one way or another.

If you’re a two-plane swinger or a one-plane swinger, any of those kinds of things, they will work as long as we’re doing the five pieces like we talk about in the Top Speed Golf System, which is staying nice and stable, good powerful turn, lagging that club to get the speed, and then releasing that lag.

If you do those five things, really any of these types of things will work, but I don’t particularly think it’s going to be to your best interest to go to the big extremes and chase kind of the latest, greatest thing out there.

That’s my soap box, that’s my two cents, I know you guys can play great no matter which swing plane you’re on. If you’re doing the five things that you need to do correctly, you’re going to be able to play great with any of them. 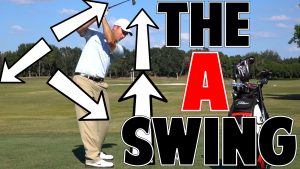