Why You Need This: We know about the importance of the "Swing Release", but don't underestimate lag and how it has a dramatic impact on the effectiveness of your swing power...

All that potential energy is built up and ready to be applied to the ball.

Without it things can get nasty real quick...

The release of built up lag when used properly will cause the ball to soar, and you can pick up at least 20 yards...

In this "Swing Release" video, I'll go through the whole process from lag, to contact, to release...

I'll show what can happen if you hold onto the lag and how that affects the ball as well as what happens when you release properly...

Don't hold your yardage back, get a proper swing release now...

Hi guys, and welcome back to Swing Speed Saturdays, now in this video today I have one of the best videos talking about one of the biggest misconceptions that there is in golf, and that’s how we’re supposed to release the golf club.

The thing that I hear time and time again, and I see students come in to me working with, is they’re trying to hold on to this club as they’re coming through contact.

So they want to build more lag, they want to have more forward shaft lean as they’re coming through, and they get this angle and they just try and hold on all the way through contact, and that’s the exact opposite of what we want to be doing.

What we want to do is be able to create some lag in the downswing and then release that lag, and it’s the releasing of the lag that allows us to create speed and t gets that club head to accelerate.

So we’re going from an angle to releasing that angle. We’re going to put it on the flight scope and see what my overall distance looks like, and then I’m going to let a few fly, let the club release, and we’ll see if my swing speed goes up or if it goes down, and what the total distance turns out to be when I do both of those.

Believe it or not what usually happens, we start to lose in the calves a little bit because our body understands we can’t hold on, the hands get tight, and it ends up just forcing that through and releasing a little bit of lag.

Oh, blocked it way out to the right. Man, that’ so much effort. I feel like I lifted a 100-pound dumbbell on that one.

My hands got really tight trying to hold I on, and I blocked it out to the right which is really common, because I couldn’t release my face. We’ll see my club head speed was 103.7, so that’s quite a bit lower than it normally would be.

Only carried 217 in the air, and then rolled out to 263, so that was kind of a low, worm burner kind of running through the ground there.

That's definitely not what we want there. Let me go ahead and try to hold on to another one, and I’ll see if I can hit it a little bit straighter, but I’ll tell you, it’s really hard to let that face go too, because my hands are holding on so tight, and you’ll see this face is just wide open.

If you’ve been struggling blocking to the right, it’s very common, that’s what’s happening. Trying to get more lag and just holding it on instead of letting the face turn over and release out in front.

Now I’m going to show you exactly how to do I the right way here in a second. Before we do that, let’s go ahead and try one more holding it on.

Yeah, the swing is so hard, man, it almost hurts my shoulder to get that tight with my right arm. Let’s see what the club head speed, was 104, and again a low worm burner because I took all the loft off of it, and I ended up getting 255 for total distance.

Actually one of the five section that we have in the system, it’s that important that you want to release the club correctly. So here as I’m coming into my downswing, I’m going to let my hips clear out of the way, my hips should be about 45° open as I’m in the straight line release.

My shoulders are going to be about 45° open, and my arms and club are both going to be 45° open.

Now you look at the face, let’s pretend I’m hitting it towards you guys on the camera, as I go to my straight line release look how the club face is rolling on and closing. Now I’m not going to be holding off and blocking to the right.

I’m going to let that speed go, and get into that straight line release position. That’s going to allow me to max out that speed.

So what that’s doing is that’s allowing me to accelerate the club as I’m coming through there.

What I want you to do at home as you’re practicing, go ahead and get up out of your chair if you’re in the living room. Grab a club, and then pause in that straight line release position three times in a row.

Hips, shoulders, arms, club, everything 45 in front. Then I want you to go ahead and pair that up with lag, and then get into that same position and pause again.

Do it about 100 times, then make 100 full practice swings to really get the rhythm of that, to feel that club releasing coming through contact, then we’re going to go ahead and take it out to the course and hit some shots with this.

Let me go ahead and try to do one nowhere I release correctly, and let’s see what that does to my distance.

Little bit off the heel there, I’m going to try one that’s a little bit better, let’s see what my club head speed did.

113 and a half club head speed, bumped up to 291, again, that wasn’t even a solid shot, I hit that a little bit off the heel. So we’ve already picked up, what, 40 yards almost and about 10 miles an hour club head speed.

Let’s see if we can ramp it up a little bit more. That time I felt I got a little off the heel, I’m going to make sure I catch that ball dead solid, and I’ve got to release that club, I’ve got to let that club go as I’m coming out in front about 45° past.

Let’s try it out. Little bit better there, slightly to the left. Let’s see what m club head speed was. 114.2 and we’re looking at 298.6, so I released a little bit better, wasn’t a dead solid hit.

I’ve had some better ones, but you can see immediately my club head speed it’s kind of hard to go from holding on to doing it correctly. So I need a few to get myself back in the rhythm.

You see how my club head sped immediately bumps up 10-12 miles an hour, my distance bumped up basically 40 yards immediately, and I started hitting the ball a lot better, all just because I’m releasing the club properly, and I’m getting rid of that tight kind of hold on block.

So good luck to you guys, work on those key factors, do the repetitions like I talked about. Get those practice swings in, and you’re going to start hitting it farther. 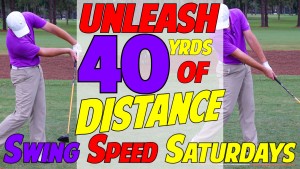