Why You Need This: In this video, you'll learn how to stop your chipping yips.

It doesn't get any worse than to get the yips and have your confidence plummet to zero.

The good news is that in this video, you'll get some great tips to combat the yips.

Before you get started, know that anyone can get the yips...

Even Tiger Woods struggled with the yips!

You're definitely not alone.

So, what causes the yips...

It's likely due to your technique.

Many golfers tend to place the ball way back in the stance.

And they also tend to put the ball further and further back in the stance if there are any problems.

That creates a severe negative angle of attack that increases the likelihood of mishitting or even chunking the ball.

First, put the ball farther up in your stance than you normally would.

This will help you come in at a more flatter angle and reduce your mishits.

Second, as you come through the shot, let your hips rotate towards the target.

This reduces the amount of effort you'll need with your arms and hands.

Remember: chips aren't putts, so allowing your hips to rotate through is just fine.

These 2 recommendations will help you hit consistent chips.

Watch this video now to stop your chipping yips once and for all!

The chipping yips, oh man, talk about frustrating. Talk about making you nervous, there’s nothing worse than being over a chip shot, feeling like you have the yips and you’re going to kind of jab up and into it.

Well I’ve got a great video today, some tips for those of you that are struggling with the yips. I’ve found that it’s actually a technical problem, and then a couple of good ideas to get you right out of this and start feeling really confident with your chipping.

The first thing we need to look at is the technique. Usually what I find, the traditional technique that I grew up being taught, is we’re going to put this ball on the inside of your back foot. Especially if our stance is a little bit wider, that’s getting really far back there.

We’re going to start to lean this club face forward or have some forward shaft lean, and if you really start to get nervous and you start to chunk a few of them.

When that happens, we’re coming down at a very negative angle of attack. If you imagine that the club swings as a pendulum, it actually flattens out a little bit more than that.

What really happens is as I swing this club, the grip end of the club actually turns up as the head releases down. That creates what’s called a flat spot, we call this impact glide.

As my handle turns up, the club is releasing down and that creates a flat spot through the bottom of the stroke here. That allows you to come in really level with the ground.

So if I’m going ahead and hitting a few of these chip shots, you’ll notice that even though I’m brushing the grass, even though I’m swinging through, my club isn’t coming down and taking a divot.

When I have that old-school put the ball back, lean the shaft forward, feel like you pull the hands through the shot, now all of a sudden instead of that nice flat spot at the bottom where I can hit anywhere in this zone.

My club is going to glide right into the ball, now I’m coming down very steeply into the ball, and I can chunk it like that and completely miss the ball all together.

The next one I get nervous, because I have a couple of those chunks and I start to jab up at it. So I’ll put the ball back, very negative angle of attack.

I’m worried that I’m going to chunk it, so at the last second, I kind of flinch up with my arms, pull up my elbows, and I get that kind of yipping stroke and the result as we know is not very good.

That’s where that yip comes from in most cases, from what I’ve found. I see that time and time again with golfers. It’s like a never-ending cycle, because the more we yip, the more we struggle, the father back we put it, the farther forward we put our hands, and the worse it gets.

Put the ball up in your stance a little bit. So if this is the middle of my stance, I want my feet close together, and I want that ball a little bit up in my stance.

I’m still going to have my hands a little bit in front of the ball. It’s OK if the face is a little bit open, that’s going to be fine. I’m adding a little bit of loft to there, that’s allowing the bounce of the club to be exposed to the turf. That’s the first thing.

If I put it back like this, I’m chopping down. If I put it in the front of my stance, I can just let this club swing and it’s going to ground out on its own, I don’t have to do any kind of manipulation with my hands and arms to keep it from hitting the turf too hard.

Now the second piece there, is going to be as I come through the shot, if I don’t use my hips what happens is, if I stop my hips there’s nothing to keep this club moving forward rather than me pushing it forward with my hands.

If my hips are locked really, really tight like a putt where we’d be using just our shoulders in a small stroke, if I lock my hips like I would in a putt when I actually hit a chip shot, I’m going to have to force the club through there with my hands.

I start to get a lot of wrist action, a lot of inconsistency. As we’re making this chipping stroke, we’re going to go ahead and let the hips face through to the target, so it’s OK to get a little bit of a pivot as you’re coming on through.

Imagine you’re tossing a golf ball to the target, you would naturally open your hips up and let it toss right to the stick. That’s what we’re going to do, that’s how it’s going to make it a lot simpler for you guys.

We’re first going to put this ball up in our stance, OK to open the face just a little bit. We’re not worried about club selection, you can use this from a 6 iron to a lob wedge, any of this would work fine.

Then from there, we’re going to let the hips open up so we can come in nice and shallow. Now I’ve specifically picked a very difficult chip shot here, because the green is really rolling away from me if I go too long.

These are the ones you start to get nervous on, because you know if you go a little too hard you’re going way over the green. It’s on an upslope to the hole, so it’s going to be well short if I don’t hit it clean.

Let’s see how I do, let’s get that ball up, let’s get it a nice, clean impact glide. Let’s keep those hips working toward the target as we come on through.

There we can see, stuck it nice and close. You guys work on that, and you’re going to get rid of those yips once and for all. 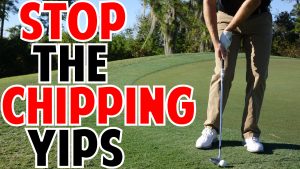