Why You Need This: Today, you'll discover "Stop the Hit Impulse! | How to Hit Through the Golf Ball"

when you reach the top of your backswing…

...every natural instinct in your body is begging you to use your arms to throw the club at the ball.

And I get it… it just feels so powerful…

...but it’s actually destroying your lag (and your power).

...with some masking tape?

I know it sounds crazy, but just give me a chance to show you what I mean…

...and you may be shocked at the results.

Once you lose that impulse & begin your downswing the RIGHT way…

...creating lag (and power) will take over…

...and your scores will get much better!

Clay Ballard: You know that hit impulse from the top drives you absolutely nuts, causes you to be really inconsistent.

Then I’m going to give you a great drill to get rid of that impulse, add tons of lag, and then release through the shot just like the pros are doing.

All right, so first let’s go over the tape. Now, what I’ve done here is I’ve taped up the knuckle of my index finger so it makes it really tough. I just had some masking tape in my bag, or sitting in my camera gear.

You don’t have to have any kind of special tape, just get it on there tight enough to where you try to bend your finger, it makes it really tough to do that.

Also put it around the knuckle of your thumb so you can’t really grab anything with your finger and your thumb of your right hand, for right-handed players, your back hand.

Now the reason is, when I hit from the top where I have that impulse, I’m really taking this right hand, I’m grabbing the club, I’m squeezing hold of it, and I’m kind of throwing it from the top.

You’re going to get a lot of that energy from those two fingers. So once you wrap up those two knuckles, it makes it very difficult to hit from the top.

So I’m going to go ahead and just hit on the range, take a middle iron, I have a 6 iron here, and I’m just going to hit some nice, easy shots.

I’m just going to hit them down kind of those two markers there, and I’m going to get used to not using those two fingers in the swing.

So nice and easy, nice straight shot like that. I’m going half swing, half speed. So nothing fancy there. Five or ten balls, and you start to get used to not overpowering with these two fingers.

The idea is we don’t use them up here, and we go ahead and use them down here to release the club. That’s where this drill is going to come in really handy.

You see when a player is hitting from the top, what’s happening is they’re actually maxing out their lag too early.

That’s from something called the stretch-shortening cycle. Basically it just says if you stretch your muscle out, as soon as it’s fully stretched, it wants to fire.

The natural, gut reaction that you’re going to have is to fire those muscles. So the mistake that a lot of people make, is in the backswing they try to set those wrists really early.

When they get to the top of the swing, you already have your hands fully set up here, and they’re wanting to throw. They’re just dying to cast this club out and throw from the top.

So we’re going to do a drill that’s going to do the actual opposite of that. In this drill, I want you to take a little half backswing, and you’re going to stop when your hands are about waist high.

I want very little to no wrist set at all here. I’m actually going to have the club just kind of as an extension of my arms.

Then I’m going to start my downswing by getting a weight shift to the left, getting my momentum moving to the left, and that’s when I want to get the lag.

So I’m actually getting rid of taking the lag up here at the top, and I’m getting the lag in the downswing so it’s kind of halfway in my downswing when I’m actually setting my wrists fully. Then we’re going to go ahead and release it.

That gets you setting the wrist much, much later. It’s a very big exaggeration drill, and man, it’s going to get rid of that hit impulse. It’s like a reverse hit impulse drill.

The last key is to make sure you finish your swing. I don’t want to stop my swing and hit at it with my arms. Again, I want to use the momentum of my body to move this on through.

So here, a little half swing. I know what you’re thinking there. Clay, that was longer than a half swing. It’s almost impossible to get yourself to stop this drill short enough.

Really make sure that you feel like you’re only taking the club back to here. Naturally, when you do that, it’s going to end up going back to here somewhere.

I also realize that that club’s going to set a little bit more. It probably looked like I had a little more wrist hinge than what I said in my drill, but that’s the feeling. It’s not exactly what’s happening there.

I want to have the feeling that in my backswing, there’s no wrist set at all, and then I’m waiting until the downswing to set those wrists and swing on through to a full finish.

So let’s go ahead and hit one more here. Again, little to no wrist set at all in the backswing, letting those wrists set in the finish.

Then I’m just going to go ahead and swing on around and I have tons of lag there. Those last two shots came out really low, really penetrating, and just dead solid.

Now there’s another piece that is going to make a big difference with this. If you have all this lag, but you don’t release it correctly, it’s going to make it feel like you’re just manipulating the club through contact.

You see, a lot of players will get this lag motion down, but what will end up happening is they drag the club through contact, and now the face is wide open. It’s pointing out to the right and never really releasing the face.

Well, in the Straight Line Release, I’m going to teach you to get this great lag angle like we talked about, but then to effortlessly let that go. You’ll notice that toe rolls on over.

You’ll notice my club naturally releases out in front of the golf ball that I would be hitting, just like you see the pros doing.

So I’m going to walk you through that step-by-step. It’s the perfect thing to pair up with this drill. You’ve started to get the hit impulse out of the top, now let’s learn how to release it through contact.

If you can get this section of your swing from here to here looking really good, you’re going to be a dag-gone good golfer.

Now that you’ve done this video, if you’re a member of the Top Speed Golf website, all you need to do is go ahead and click the Instruction tab at the top of your screen.

Go to the Top Speed Golf System, and then go to the Straight Line Release section there. Pay particular attention to the golf ball that I put on the ground.

I put a golf ball out in front, and how precisely you’re going to release the club to that golf ball and what your wrist angles are going to do.

I’m going to go over all of that for you right there in level one, make this really natural in your swing. So head over there now. I can’t wait to see you in the Straight Line Release. 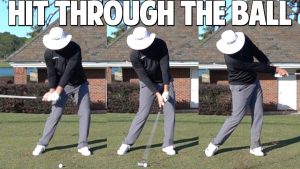