Why You Need This: Today, you'll discover "Stop Rushing the Downswing | Use the Ground Correctly"

The key to solving these issues has to do with when the pressure in your feet shifts.

Today, I’ll show you when you should feel pressure shifts in your backswing and downswing (hint: it’s probably not when you think)...

...you’ll learn how the key to your backswing is all about ground force...

...so that you can correct your sequencing and start smashing the ball consistently!

G131. Stop Rushing the Downswing | Use the Ground Correctly

Quentin Patterson: If you’re rushing the downswing, it’s because you’re thinking of the backswing and the downswing as two separate events.

In reality, there’s things that you need to be doing in the backswing to ensure that you are taking a proper downswing. This really comes down to the forces that we’re putting into the ground.

What most people are doing or what people I see that are rushing the downswing, is they are going up to the top of the swing and they’re loading up in their trail foot, and then they’re staying there as they get up to the top, then they start the downswing with all arms.

So how do we use our feet correctly to be able to get that proper sequencing and be able to feel like we’re not rushing the downswing, we have that good, effortless power?

Well the good part is, is that they have studied lots of Tour players and they’ve used these pressure mats, and they know how the best players in the world, how they set up and how they do this.

At address, what they’ve found was, on average, your average Tour player, is going to be about 50/50 in their feet.

Now those aren’t exactly the numbers, I’m just kind of simplifying this to make it a little bit easier for you, but it was basically 50/50 at address.

What we need to be doing is we need to make sure that we’re shifting pressure right away in the backswing, as soon as that club starts going back, we’re seeing the pressure, we’re feeling the pressure in our trail foot start to load up more.

So they’re putting pressure up right away, and then as they’re getting into this area right here, when the lead arm’s getting close to parallel to the ground, they’re actually starting to recenter the pressure.

As I’m getting to about right here, my pressure in my trail leg, or my trail foot, is maxing out. It’s at about 75 percent where that’s maxing out.

As we’re doing that, we’re going to make sure, we’re going to feel like we’re loading up as soon possible in our trail foot, and as much as we possibly can to that point, at that lead arm parallel position.

What we don’t want to do here is shift our mass. This is a pressure shift, this is forces that we’re putting into the ground.

It’s not so much a weight shift, a weight shift if I’m taking my center of mass, which you can think of as maybe my belly button, and I’m shifting it over over here. I don’t want to be doing that.

There can be a little bit of it, like a one-inch shift, but we want to put pressure into the ground and then rotate our body as we’re going up to that point.

We’re going to feel that pressure on the inside of our foot here, and then moving into the heel as we’re getting up into this area right here.

If we’re feeling a lot of pressure on the outside of our foot, that means that you’re shifting your weight and you’re not necessarily shifting pressure. Pressure is the force that you’re putting into the ground.

So we’re going up to the top and we’re recentering our body. Now I’m back to 50/50, and then I’m going to push into the ground here with my lead leg, and I’m going to swing all the way through into the full finish.

I’m going to do 10 good ones of those getting that proper feeling. Again, loading up right away to lead arm parallel, recentering, then pushing through with that lead leg coming all the way through into the full finish.

Now let’s progress this to the next step after we’ve got 10 good ones. After 10 good ones, we’re going to do that first part of the drill, but we’re not going to pause at the top.

We’re just going to continue to go into the full finish. So again, we’re going to start in our address position, 50/50. We’re going to go 75 percent pressure in the trail foot loading up right away to lead arm parallel.

Then in one motion, one fluid motion, we’re going to from this position lead arm parallel to the backswing, to the full finish.

We need to from here, recenter as we’re going up to the top, and then continuing to put increased pressure into our lead foot.

Feel like you’re getting as much pressure into the ground as you can as you’re coming into contact, and then into the full finish.

Hit the ground when you do that. Try to brush the turf as you’re doing that, so that way you can get a sense of the turf. Now get 10 good ones of that, getting that same feeling of what you’re doing.

The next progression where you’re going to put it all together, just do like a 50 percent swing where you’re taking the pause out, but you’re feeling balanced at addressed, loading up early to this point, recentering at the top, and then swinging down all the way into the full finish and a nice, fluid swing.

So that’s going to look something like this. Load up right away, get to the lead side, come all the way around into a full finish.

Once you’re at full speed with it, now you’re at time to hit a golf ball, it’s time to put this to the test and see if we have a much better flow and rhythm to this swing.

You’re not going to be hanging back anymore. You may find that your over the top is gone and now you’re hitting draws and things like that, just because you’re sequencing and using the ground much, much better.

All right, so that’s a nice little draw there. It’s a pretty good 6 iron for me. Now there’s still an issue that I see that some people have when they start getting the ground forces correct.

They start getting the club to shallow out a little more naturally here, but they’ll still tend to have the face too open.

What can happen is, they’ll come into contact and if they’re using the ground forces in the right way, the face will just be wide open. They’re not using the proper wrist angles to get that face nice and squared up at contact.

Or, what generally, usually happens, is they’ll get the ground forces going initially correctly but then they’ll have that face too open, and then they’ll kind of hang back and stand up and flip at the ball, because that’s what they’re used to doing.

That’s the motor pattern that they have currently, to be able to square up that face.

This is what we talk about in The Move course at Top Speed Golf. So if you want to check that out, check out The Move.

This is where Clay talks about how to get those proper wrist angles, get those forearms shallowing out the club, so that way you can stay in your posture and hit really, really great golf shots time after time.

To get to The Move course, click the Instruction tab, and then click the Top Speed Golf System, and then click The Move. Get started on the drills, work through the first drill 1.1, just getting accompanied with it.

Then once you get to that 1.3, the Tennis Racket Drill, that’s going to be a really great drill to start getting you to use those wrist angles properly.

Play well, and I’ll talk to you soon. 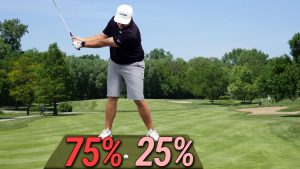