Why You Need This: Today, you'll discover "Stop Over-Powering Your Right Arm | Shallow Your Golf Swing"

Professor Q shows you the perfect drill to keep your right arm from taking over your swing and making shallowing nearly impossible...

...and he also let's you in on what he thinks is the best investment you can make for your golf game (at the 2:13 mark of the video).

So basically what's happening is in the downswing, this club is getting more vertical as you're coming down. My right arm is really taking over and pushing that club out. Right. So the alternative, basically the options from here are two things One, I'm either going to continue to come down steep and I'm going to chop down into the ball.

I'm going to swing way over the top. I'm going to hit pulls, slices, pull drawers, pull hooks. Basically, you're going to get every miss in the book. If you come down steep in over the top and do that, and that's even if you make good contact right The alternative, that option number two, something I often see is we try to save this steep swing by standing up out of it.

So look what happens if I'm steep and I stand up. Look what happens to the club. The club shallow is out, right? And now I can swing from the inside. But the problem is I've had to stand up out of my posture. To do that. And I have to kind of throw my hands and flip my hands at it to save it.

And you can hit a functional shot at doing that, but it's just going to be wildly inconsistent. You're not going to have any control of this clubface. Your ground contact is going to be thin. Chunk You know, you're going to add a lot of loft so you can be hitting weak shots. It's just not an ideal situation. And that's not what the tour players are doing.

And that's what we want in the swing. So let's talk about the drill that's really going to help you to accomplish this and get this right arm out there a little bit. So all you need is alignment. Stick for this drill. If you don't have an alignment stick, you can get these at any, you know, home improvement store.

There are a couple of dollars. It's good for this drill. There's lots of other drills you can do with it, too. It's just a good golf tool. It's one of the best investments you'll ever make a couple of bucks at your local home improvement store. What are you going to do is take this stick and hold it against the shaft.

Now, I know this isn't the normal address position but this is where we need to be for this clubhead it's going to get your right arm working in the correct way. And what I want you to do here is start your back swing and keep this stick kind of behind you here. All right. So we're going to keep that stick behind me.

And from there, I can't have my right arm overpower the swing when I do that. So, again, I'm going to take the stick half of it at one end and I'm going to try to put it on the other side. I mean, I set up like this. I'm just going to go up to the top and you can see how my right arm works.

My right arm works going to work underneath. And I'm going to go through like that. Right. And the other cool part about this is, is you can train this to help you get forward shaffling as well. Ideally, when I'm coming through, I want this stick not to be touching my body. And you can see if it's not touching my body, I have the shaft in front.

If I come in, it whips me in the side and that means I'm really releasing the club. I'm adding a lot of loft. So again, I'm going to set up here. I'll go up like this. I'm just going to do nice pausing wraps in the beginning here. It's going to go up like this. I have work underneath swing through, right?

And I'm going to start to add some fluidity to it now. So now instead of doing slow pausing, I'm going to do slow fluid here and describe feel You can see there that club is shallowing out a ton and I'm getting those hands way in front at impact. And I'm just going to keep building the speed more and more and more as I do that, as I get more uncomfortable with it.

I might imagine there's a laser shooting out of the end of this club, and I want to feel like that laser in the back swing is pointing back behind me like the stick was on the downswing. I want to imagine that laser is pointing outside. The golf ball isn't coming down. So if I have those same feelings, this is crazy exaggerated, but it's getting that right.

Arm to work in the correct way. It's going to feel super loopy and weird because it's basically the opposite of what you're doing before. But what you're doing before is loopy too, right? If I'm bringing this club way inside, I'm looping it way inside and I'm looping it out over the top. You're just changing the loop to get you to shallow out the club, which is what we want to do.

Right? So it's going to feel loopy, but what you were doing before was loopy anyway, so we may as well feel it loopy in the right way. So again, we're going to fill it out and then it and keep working through that faster and faster and faster. And look on video, look on video. See if that club is working on that right arm is bending in and tucking in.

You're going to feel how much easier it is if you keep that club outside to get that right arm to work in the right way. It's not going to be working against you. It's so difficult if you suck this club inside and bend that right arm right away to get it to do the same thing in the downswing.

It's near impossible. The momentum of everything is going to be working out over the top on you. You want to get it working out away from you and then into you, and that's going to allow you to shallow out the club much more easily. So work through this, get to where you can do it in a slow fluid swing with the stick, then remove the stick, do the same thing, get the same feeling, and then add the golf ball and you'll be in business.

This is a great drill to get you started with shallowing at the club, but what about the Clubface as it's coming down, right? We need to be getting that club face square. If you're used to coming down steep and standing up out of it, and flipping at it, you're squaring up the face by early releasing the club. Well, there are things that we need to be doing with our wrists and things that we could be doing with our grip a lot better to be able to get that Clubface Square at impact instead of flipping at it to square it up.

Play well and I'll talk to you soon. 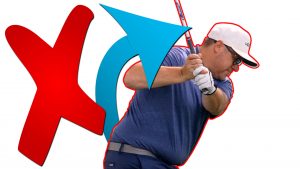