Why You Need This: Today, you'll discover "Simple Tips to Instantly Add Speed to Your Golf Swing"

Did you know there’s something you can do with your hands in the backswing to add distance instantly?

...some require more time and effort than others…

...but this is something that you can work on to instantly gain distance.

And not only that, but you’ll also learn about this very common thing that you’re probably doing that’s actually robbing you of distance!

Quentin Patterson: There are many ways to add club head speed. You can work on your ground force reactions.

You can work on getting some lag. But I really only found one way that’s going to help you to instantly add club head speed to your game, and that’s creating more space and time to accelerate the club.

The more space and time you have to accelerate the club, the more speed you can generate, and the more ultimately the distance that you can get from that. So how do we do that?

If I don’t turn my hips and turn my shoulders, I just kind of get my arms over here, it’s going to be very, very difficult for me to create speed from here.

I need to go ahead and turn my hips and turn my shoulders so I can get that club going back further.

If I bring that club back here, even if I turn my hips and my shoulders a lot, I just don’t have a lot of space and time to accelerate the club. I need to get those arms up higher so that way I have a lot more space.

How do we work on this? The first thing I want to do here is show you what a swing would look like if I restricted those things, because I see people in lessons all the time who are really restricting these things and robbing themselves of distance.

Then they work on these things, and instantly they’ve added a lot of club head speed. I’ve seen people add more than 20 miles per hour just by working on these things I’m going to be talking about.

In this swing here, I’m going to try to restrict my turn, my horizontal components, and my vertical components and see what kind of speed I can generate.

I’m going to be honest with you, I’m not really sure where this is going to go. I hope I can hit it solid, but I’m going to try to hit this with a lot of effort here, and see what kind of speed I can generate by doing what feels like to me is very, very restrictive.

I may not look super restrictive on video, hopefully it does, but I’m going to really, really try to restrict myself and see what I can do.

So that I hit way off the heel, didn’t hit it very good. Didn’t go very far, but I got 105 miles per hour there. I just felt super rushed, I actually came over the top there a little bit and just hit a pull off the heel.

Carried about 205 yards and only had a smash factor of 1.35. That’s not my best right there, it had a lot of spin, too because I felt like I had to rush it so much because I was trying to give it so much effort.

Got 105 miles per hour, which isn’t too bad, but that’s definitely much lower than my normal. So how can I instantly add that club head speed?

First what I want you to do, is grab an alignment stick and get in your stance here, and put it just inside your trail foot there.

Now the reason why we have it on that trail foot is that one thing I see a lot of people do in an effort to create more space and time, is they will actually kind of lean back this way.

If you imagine I’m taking my swing, now this is lengthening my swing. I am getting the club to go back further. I am creating more space and time, but that’s not the way you want to do it.

It’s just very, very hard to be consistent if we’re really leaning toward the target. We want to stay behind the golf ball, get nice and loaded up so that way we can shift our weight more easily. That’s why we’re putting that on the trail foot here.

Initially, we’re going to work on these horizontal components. That’s the hip turn, and the shoulder turn. I know you may be thinking I’m not flexible, I’m not going to be able to turn very much.

Well, I’m not flexible either. I’m actually very, very inflexible in my lower body. I’m working on it right now to hopefully get some freed up, but what I have to do because when you turn your hips, your trail leg is internally rotating. So it’s going like that.

One other thing I’d recommend doing is letting this heel, this lead heel come off the ground. It’s completely fine to do that.

I know a lot of you may have been told hey, keep your feet on the ground, but that’s a total myth. Look at players like Jack Nicklaus, Bubba Watson, there’s lots of players out there who lift that heel off the ground. I’ve seen Tiger do it sometimes.

So go ahead and let that heel come off the ground, that can help free up the hips. If you keep that heel on the ground, it can act as an anchor for your hips and not allow those to free up.

One last piece would be to drop this trail foot back a little bit. That can help you to get turned away a little bit more.

Those things, the hips are the number one thing that I see people struggle with as far as the horizontal components.

Most people are able to get a good turn between the shoulders and the hips, it’s the hips and the ground where I usually see the issues.

I’m going to go one, two, now last one, three, I’m going to swing all the way through. Now I really want you to feel that stretch in the turn there, and get that nice and matched up there.

If I’m looking right down with my eyes here, I can see that my club is going right down that. Do that a few times, get in four or five reps of doing that, and now let’s get the club in our hands and try to replicate that same motion.

You can feel there how much time you’re going to have to accelerate the club. It’s going to feel like you’re creating more effortless speed when you do that. So get in a few more reps with that.

What I want you to do again, is add this feeling in with the last one we were getting the big turn and matching your shoulders up.

Let’s also feel like we’re getting that touchdown feeling like we’re lifting the club. We’re taking this club up an elevator shaft. That’s what we want to feel like is happening.

I’m going to implement that same thing, and go nice and slow at first. If you’re someone that swings very, very flat right now, this is probably going to feel really weird.

Go nice and slow at first, and then build up the speed from there. So again, I’m going to do three, three pumps here, and on the last one I’m going to swing through.

I’m going to feel big shoulder turn and doing a touchdown signal, feeling that club go basically straight up in the air.

If you watch me here, I’m going to go one, two, and then three, on the last one I’m going to swing all the way through. You can see I went nice and slow there, build up the speed, build up to much, much faster speed.

Let’s see if I can get some nice, club head speed boost here from working on this. If I can get my tee in the ground here. All right, so let me move this out of the way.

All right, now that you have this instant speed, we now need to make it second nature to where you get out of the car, this is already what your body is doing, you don’t even have to think about it, you’re already getting this big turn in the backswing.

Work through the levels, level one, level two, level three, and as you work through these levels, you’re going to find how much easier it is to get that big turn, to get that club working back behind you and get a lot more speed.

So work on this, get to where it’s second nature, and I’ll talk to you soon. 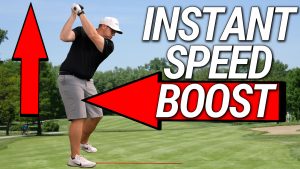