Why You Need This: Today, you'll discover the "Perfect Backswing To Shallow the Club"

If you're someone who struggles to get your club "in the slot" on the downswing...

...the issue could be your backswing.

You see, there are two common backswing mistakes...

...that make getting into the proper position more difficult.

Today, you're going to solve these two problems with one drill...

...as you discover how one simple backswing change can make it much easier to drop the club into the slot in the downswing...

...and how a ferris wheel can help you add an instant 5 to 10 yards to any club in your bag.

Clay Ballard: All right, it’s great to have you here today, and I’ve got the perfect station set up to get your backswing looking really good. It’s going to solve two problems.

Number one problem I see is players getting the club too far inside in the backswing, and that causes them to get steep on the downswing and start to kind of come down over the top, really not getting it into the slot like we want to have.

Number two is getting that good, full turn. Making sure that our hands go up, we have tons of power, and maybe you’re not very flexible.

Maybe you feel a little bit stiff, a little bit tight. I’m going to show you a couple of tricks to get that good, full backswing.

All right, so the way I want to set up this drill is I’m going to go ahead and pick my target in the distance. I’ve come back behind my target. I’ve lined my club up with the direction I’m going to hit it.

Now I want to put this club about a foot, a foot and a half behind my golf ball. That way if I make a practice swing, I’m not going to hit the butt end of this club as I’m starting back.

Now from there, I’ve set my angle, the lie angle of my club, just on this club on the ground like I was going to hit on that. So the sweet spot of my club is right over top of the shaft.

I bring it back perfectly on plane, it would be right on that stick and my club would be pointing right to my target there now. I could be off a couple millimeters here or there, but it’s just the general idea.

Now, what we’re going to do is we’re going to make a backswing where we feel like our hands -- and this is actually a big misconception – when I want to bring the club a little bit more out, I don’t want to get it sucked back in to the inside and doing this.

Your hands can be going out this direction, and the club can be the one getting sucked in. Well, there’s momentum in the golf swing.

A lot of times we think, well I don’t want to get steep, so I need to bring it more inside. I need to get in the slot. I’m going to do that in the backswing.

But if you do that, if you do this mistake like we’re talking about here, the momentum of this club gets deep and then as you change direction, the momentum wants it to swing back steeper, back more over the top.

The more you go inside in the backswing, the more that kicks the club on top in the downswing. We want to reverse that, that way it makes it easier to get in the slot and shallow that club out.

Again, here’s how we’re going to do this. I’m going to set up to my golf ball here. I’m going to make my backswing. I’m going to pause when my club’s parallel to the ground. I want to see just like that.

My hands are slightly inside this stick, my club head is slightly outside this stick. I’m exaggerating a little bit here, but to be honest, the number of people that I see that overdo this in the backswing is very, very few. I rarely see anybody do that.

I see tons of players do way too much of this, though, and them come that way. So we’re going to do that about five times. I’m really going to feel in that backswing, hands in, club out.

So now my hands can go ahead and come out a little bit, and that club, the momentum of that club wants to swing under, get more from the inside.

Let’s go ahead and try one out here.

It’s way too dangerous doing that. But I wanted to show that this is actually a plane and a motion that can work. Now the second part of this, is the backswing piece, the power.

Now if I think of it more of a merry-go-round, eventually as I go to the inside, again not only am I going to have a tendency to get more in here where I don’t want to be, as my hands go around my body, my chest gets in the way, especially if you’re not super flexible. It gets really tight.

Now all of a sudden, my hands are way down here, I have a lot less time versus up here to accelerate the club.

Now I found most players can easily elevate their arms and a great test for this is if you just stand straight up and down, put your arms out in front of your body.

If you can lift your arms up above your head, well I can lift my club up vertically above my head here. If you have a shoulder issue and you can only lift your arms to here, you can’t go on up, then you may have to be a little bit more across your body.

But again, I find very few players that’s an issue with it. So now I’m going to do a couple more of these practice swings, and not only am I going to focus on the club head staying outside my hands, I’m going to imagine it going straight up.

I’m going to imagine me getting this big, full turn here and getting a lot of power. Now again, you want to do this in your practice swings, get comfortable with that, and you’re going to remove this stick.

Definitely, I can’t reiterate it enough, it’s a very dangerous drill and you don’t want to do that.

I do not recommend that for anybody to hit balls with that stick there, because you could easily, again, whack that stick and it could stick in your head, your eye, your leg, lots of bad things could happen with that drill.

I got the feeling of it now, and now I’m just going to go ahead and complete that backswing, get my hands nice and high and get an extra few yards of distance.

There we go, hit that one well. Now there’s another piece to this. There’s a missing piece. We have shallowed out the club better here, and that’s what I call The Move in the Top Speed Golf System.

But there’s a piece that’s missing from The Move that I haven’t gone over here yet that’s absolutely critical to making this happen.

The last thing I want to do is get this great big turn, I’m loaded up, shallow that club out so it’s coming from the inside, and then leave that face open.

If I do that, if I shallow the club out, if I get in the slot and the face is open, just like this which is very common, this is the most common that I see in players, that ball is going to go right of right.

That’s exactly what I’m going to walk through as you follow those drills. As you click on the Instruction tab, you go to the Top Speed Golf System.

You go to The Move section, you’re going to not only talk more there, really build on how to shallow this club out, build on what we talked about here today.

But we’re going to add another piece which is squaring up that face so that not only are you shallow, but you’re also hitting those nice, compressed, solid, great-feeling draws.

So I can’t wait to see you in The Move section. Let’s go ahead and jump over there now and get started.

I want to share with you some of those secretes on how to properly release the wrist to really hit some great shots. 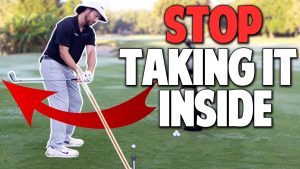