Why You Need This: Today, you'll discover "Most Golfers Get This Wrong | Start the Golf Swing Correctly"

The golf swing is SO much easier if you get it started right.

Today, you’ll discover 2 keys to making sure your swing starts off on the right path…

…and a great drill that makes implementing them super easy.

The golf swing is so much easier if you can get it started correctly. And I have an awesome drill that's really going to make this super easy for you. So there's really two important things. Number one is we want to have a trigger. And number two is we want to have the sensation of a throw. So let's first talk about the trigger.

The trigger is what we're doing before the club even starts moving back And what we really want to do with this is we want to get some pressure into that trophy right away. We really want to spike that pressure. So what I like to do is I actually like to kind of kick my pressure forward first and then kick it back.

So that would look something like this, right. So I'm moving forward just a little bit. It's just a tiny amount. And then I'm moving back. You'll see some players. They may kick their leg in. They'll see some players. They may lift up their trail, heel, and then put it back on the ground to apply that pressure, play around with it and find what feels the most natural for you.

But what I like to do is I kind of like to lean forward and then lean back again. That's the most common way that I see tour players do it as well. So that's number one. Number two is the throw sensation. So as soon as we get that pressure applied, we can start bringing that club back and we want to have that sensation that we're throwing the club straight away from the target.

This does lots of beneficial things for us. Number one is it allows you to get a wide takeaway. We all know how important that is for power. We don't see any tour players who bring the club back like this when the clubs parallel to the ground where the club is not clear or the hands aren't clear the legs yet.

We always see the most powerful players and the best players have some space here between their hands and leg when that club is parallel to the ground in the in the start of the back swing. So very, very important for power. Number two is it makes us to where we don't feel like we have to manipulate the face.

I see all too many golfers who open up the face when they bring it back or they'll really hood the face when they're bringing it back. Now, you can be successful doing that, but it just means that you have to do other things in the downswing to bring that back to square. And it just complicates things. It's just not necessary So if we have the sensation of throwing it back, that's going to get this leading edge of the club pretty close to matching my posture at this point in the swing, which is which means that you're not manipulating the face open or closed, and there aren't going to be a bunch of things that you

have to do later to get it back to where it needs to be. So the last thing that does is if we have the sensation of throwing this club straight back away from the target, we're not going to bring this club way inside. Right? And that is the death move of a lot of players when we bring this club inside.

The arms get really tight to the chest here, and then we really want to throw the arms off the chest and start the downswing that's going to lead to an over the top. And we all know that's definitely not what we want to do. So here's an awesome drill for you that's going to help you get this trigger move and also help you get this throw sensation.

So you probably noticed that had this impact bags sitting here. You don't have to use a impact bag. You can use anything that's got a little bit of weight to it. You know, a lighter, you know, maybe I wouldn't do with a super heavy medicine ball, but like maybe like an £8 medicine ball would work. Not sure exactly how this weighs, but it's got some got some weight to it.

So it's really going help me feel exactly what I want to do with this. But this is a impact bag. It's from Eyeline Golf. I really like this one. There's lots of ones out there. If you want to pick this one up, I'll put a link in the description below. All right. So what we're going to do to start with this is we're going to start out in our golf posture here, just as if we were standing here with the club.

Now, what's really important with this is we don't want to go like this, right? We want to break into that lead into that trail leg. Excuse me. And push away so that way we can throw it a far that way. As far that way as we can. But imagine, if you were throwing something, you wouldn't go like this.

That wouldn't be very powerful. If we were trying to throw this bag as powerfully as we could, we would get here. We put that pressure, and then we would really break and turn our chest away. Right. And be able to throw that bag as far as possible. So that's a sensation that we want to have here, swing it forward, pressure in and then throw it away as far as possible.

I want you to just do some practice swings that first so we're going to go one. And what I'm feeling here is I'm putting that pressure right away into that drill foot, and I'm feeling that throw of the club straight back. So one, two, three. That's the feeling that I want to have. I'm doing it. I'm having the same sensation as I'm throwing that impact back, back.

And it's also going to get this lead arm kind of away from out of our chest. So that way we can turn into it and start opening up without coming over the top. You see, if I bring that club way, way inside I get my arm pinned to my chest, then I'm just going to want to throw that club out in front of me.

So with this drill that we just did, you're already doing things that are going to make it a lot easier. But there are specific things that we need to do in the start of the downswing, so that way we can get that club in the slot right away. Because honestly, if halfway down we don't have that club in a good position, we don't have that face in a good position, we're toast.

We're going to have a really hard time being consistent. You're going to have to make compensations at the last second. You gotta imagine how much time there is from there. To there. We're talking split seconds, you know, not not even, you know, a quarter of a second from halfway down to impact you just don't have time to think about what you need to do.

We're going to have that club on playing make center face contact every single time. So this is what we refer to as the move at Tospeed Golf. And if you want to learn how to do this, I highly recommend checking out this course. One of our most popular courses on the website it's included with your membership to get to the move course.

All you have to do is click the instruction tab the top and then go to Top Speed system, go to the move, work through those drills and start striking the ball right now. Play well. I'll talk to you soon. 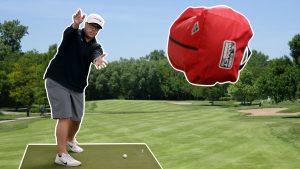