Why You Need This: In this video, you'll learn how to get more golf swing speed by examining your right wrist in great detail.

Have you ever wondered what exactly the right wrist should be doing throughout the swing?

Well, don't overlook this seemingly simple part of the swing.

Your right wrist is vitally important in terms of getting lag and releasing the lag for powerful contact.

As you'll see in this video, you're not going to get a quick tip here.

What you'll get is an in-depth explanation of what your right wrist does...

And we'll take a look into the science of how your wrist affects your swing's results.

The video starts by explaining the motions of the right wrist...

Now, I realize this video may be getting a bit geeky as we review some complicated concepts...

Every aspect of your right wrist movement is also demonstrated in laymen's terms...

So you can learn all you need to know about your right wrist in the swing.

Watch now to master this crucial part of the swing!

Hi guys, and welcome back. One of the most popular things to talk about is how the hands work, and how those get you some speed. We’ve got to get a lot of lag, we’ve got to release that lag. Very important in the golf swing.

But a lot of people aren’t quite sure how should my right wrist be moving throughout the swing? This is going to be a perfect video for those of you out there that may be golf instructors or students that are struggling with your lag and release.

I’m going to go into tons of detail on exactly how the right wrist works. This isn’t a good video for somebody who’s just wanting to pick up a quick tip that’s going to be able to take it out to the course and play a little bit better.

This is more for an understanding, so it’s not quite for everybody, but I think those of you that really want to know the exact science of it are really going to love it.

Let’s start out with talking about the three motions of the right wrist. So we have, if we can imagine we’re giving a thumbs up. If we push our thumb down this way, that’s what’s called ulnar deviation, meaning our hand is rotating down. This is radial deviation.

Let’s just call that thumb down and thumb up for this video. Let me go ahead and talk about how throughout the entire swing just this one part, how the thumb is going to move up and down.

So when we’re at address, what’s going to happen, as I set up to the golf ball my thumb is going to, or my hands are going to be slightly rotated down. Ulnar deviation, or thumb down. So that’s neutral, meaning my forearm goes right through my wrist.

I’m going to be rotated down slightly at address, and that’s just going to allow me to match the angle of the club shaft at address.

Now as I do my takeaway, I’m very gradually going to start to get this wrist moving up. Needs to happen very, very slow. If you have a tendency to start to kind of flick the club up, pick up the club up very early, I’m getting a lot of thumb up very quick in my swing.

I want to feel like I’m keeping that very relaxed and my thumb more down as I’m doing my takeaway.

Now as you go to the top of the swing, I’m going to reach probably about 80 to 90 percent of the thumb up that I’m going to get in the entire swing. I’m going to continue to get thumb up, or getting that radial deviation, the thumb back toward my body, as I start down.

I’m going to be fully maxed out as my left arm is about parallel with the ground. So I’ve gone from down at address, here’s the top of my swing right here, here’s my downswing going even a little bit more up, really getting a lot of lag as I’m starting down.

Now you can see I’m fully rotated down at that point. So there, down, down, down, full straight line release. That’s when the club’s 45° out in front. I’ve let go of all that leg, I’ve released this golf club.

Then from there, my hand is going to start to go back up again to be nice and comfortable in the release position.

So that’s a very confusing part, I think, for a lot of players as they think about well, I’m going to get my wrist to set, and then I’m just going t hold it throughout the swing. There’s no holding in the golf swing, I can promise you that.

I’ve watched thousands and thousands of golf swings, it’s constantly moving. There’s no holding, it just doesn’t happen, it won’t work. The momentum and the changing direction, momentum of the club is always going to want to have it moving.

So I’m starting at address thumb down. Up, up, up, top of the backswing, increasing into about halfway into the downswing, releasing that all the way down to the straight line release. Then I’m going to be hinging back up as I come to my follow through.

So basically it’s doing this as I go throughout the swing. That’s how it’s happening, it’s that nice smooth up and down motion where I’m letting it flow and I’m getting the wrist action to happen in there.

That’s one of the three pieces that’s happening in the golf swing when we’re talking about this right wrist.

The second one is going to be what’s called protraction -- or excuse me pronation, protraction would be from the shoulder -- pronation and supination.

As I’m at address, my wrist is hanging fairly neutral, you know there’s not a lot of pronation or supination. As I go to the top of the swing, I’m going to rotate my forearm to the right. I’m going to get that doorknob right.

As I go, and I’m opening this up, that allows the club to come down, to come back and be on plane. It looks something like this, now I’m on plane.

As I start down, again, I’m actually increasing getting that club to flatten out even more. So I’m going let’s say again, about 70, 80, 90 percent of my supination doorknob to the right going back.

As I start down, it’s actually going a little bit more and then I’m going into the straight line release, I’m going in to pronation or doorknob to the left.

So again, rotating open, open, open. As I start down it’s going even more opening to flatten that club out, and then as I’m coming through contact, now it’s closing. Doorknob to the left to close that down. I’m very closed as I get in the straight line release.

Then it’s going to continue to close on around and be kind of relaxed and neutral as I finish up over my left shoulder. That’s how that happens.

Same thing with the thumb up/thumb down, we’re either doorknob to the right or we’re doorknob to the left. We’re really at no point in the swing are we just holding a position and then letting it go.

The last motion we’re going to talk about here is what we can call palm out and palm in. This is my palm facing into my body, this is facing out away from my body. The real name for that is extension, meaning that my knuckles are moving back to my elbow, that would be full extension.

Then flexion would be my palm is all the way in toward my elbow. Full extension, full flexion, I’m going to call that palm out, and palm in, really just getting that type of a motion.

So I’m going back, I’m letting my wrist hinge back towards my elbows, my knuckles back toward my elbow. As I start down, I’m getting even more, now I’m fully extended to where my wrist is fully back.

Then as I come down, you can see here I have a bunch of lag, my wrist is still back to my elbow quite a bit. Now from there, I’m letting this wrist release into my straight line release position. So I’m doing that motion.

I have a video called Pet the Grass that I go over in the Top Speed Golf System in our course, where I talk about releasing that wrist to feel like you’re petting the grass with your right hand.

That’s going to happening as you’re coming through contact. So I’m getting more and more extension, maxing out on it, and then I’m immediately releasing that.

So I know there’s a lot going in there, sorry to get as detailed as I want, but I get a lot of questions on that. That’s what’s happening. As you’re going back you’re increasing one way. As you start down you’re actually doing a little bit more, and then whew, letting that go through contact.

Let’s take a look at these in slow motion. I’ll do a slow motion video getting a bunch of lag, you’ll be able to see those wrists. I really want you to pay attention to what people really get wrong.

Let’s go ahead and check that out on slow motion, and then good luck to you guys. I’ll see you all very soon.

G141. The 3 Biggest Mistakes You Make With Your DriverPublished: Nov 30th Get Access Now! 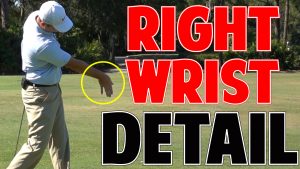