Why You Need This: In this video, you'll learn how to make more putts.

You do this by adding topspin to the ball.

The idea is that as soon as you hit the putt, you want the ball to roll end over end so it travels nice and smoothly on the green.

And if your ball is jumping around on the green, don't be surprised if the ball goes off line and you miss even the simple putts.

To get a smooth roll on your putts...

First, take a little loft off your putter.

You'll also want to hit slightly up on the ball.

These two adjustments to your putting will help create topspin and you'll get a nice, smooth roll with your putts.

Hi guys, and welcome back. In today’s video I’m going to talk about what I call topspin putting. The idea with this is that as soon as we hit the putt, we want to get our ball rolling end over end so it just scoots across the ground, it doesn’t have any hopping or jumping from left to right.

The best putters in the world are going to get a really good roll on the ball when they do this. A lot of times you’ll find yourself when you’re putting poorly, you’re hitting down into the ball, or you’re hitting up into the ball too much, and that’s getting the ball hopping on the green.

Every time the ball slams down into the green, it’s going to kick right or kick left, and it’s going to knock it off line. So we want that really nice, smooth roll as we’re putting really good.

There’s a couple things we’re going to do to make this happen. Number one, we’re going to take a little loft off the putter. So if I come in here close to the camera, and I show you the ball and the logo of the ball you can see here.

I’m also going to be hitting this ball on the rise. So my putter face is moving up as far as the path. Now since I have less loft and an upward path, those two different angles are going to make some topspin.

You can imagine if this ball, look at the logo, as I’m hitting – I’m exaggerating here, it’s not nearly this exaggerated when you’re hitting a putt. But you can see how that’s going to get the logo of the ball rolling end over end.

We also have a bit of an arc as we’re putting. As I’m swinging back and through, my putter’s going to naturally come on a little bit of an arc, and that’s going to release the face to help you get a good roll as we’re doing that.

As I’m coming through the ball, my face is going to be closing and allowing that to get even easier, more easily get topspin. This is what people often refer to as releasing the putter.

Now let’s go ahead, let’s try a few of these out. Let that putter release, get some nice topspin, and you’re going to get a great roll on the ball.

SH070. This Is The Most Important Thing in Pitching Like a Golf ProPublished: Aug 10th Get Access Now! 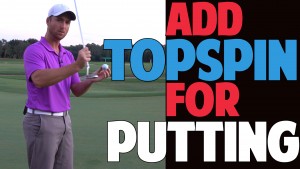