Why You Need This: Today you'll discover how to "Look Like a Tour Pro in One Range Session"

What if I told you that you could look much more like a tour pro in just one range session?

You see, there's a major difference in the hip pattern of a recreational golfer's swing...

...than that of a professional's swing.

Discover the simple move you need to work on with your hips in the downswing...

...and after your next range session you'll look much more like a pro!

Clay Ballard: Now we’ve all wanted to have that Tour player swing. If you look at a lot of the pros, they’re doing so many things very similar that when I see thousands of recreational golfers, it’s a totally different pattern.

Let me go over the Tour player pattern. I’m going to give you the exact thing you need to feel to make this happen, and you’re going to be looking – the overall shape of your swing – is going to be looking like a professional golfer’s swing if you follow these drills in just one practice session.

So let’s go ahead and get into it. What do recreational golfers do, and let’s start with these hips. There’s two things that are happening here.

Number one, as a recreational golfer, most players start down. I can relate to this, because I use to do this. I bet you can relate to it, too, is the hips move toward the golf ball.

Instead of the hips kind of clearing out of the way like you see with the Pros, the hips move toward the golf ball and they tend to stall out and not open, and then the arms flip and the body stays fairly closed.

So it’s one of these things where the hips bump toward the golf ball and forward, we stand up, get farther away from the golf ball, and then we flip with the hands and arms.

That’s a pattern that I see all the time with players that don’t hit the ball as well as they really could, and they’ve been struggling to make this happen. What’s the pattern we need to have to reverse this?

Well, let’s start out with the move of the hips going toward the ball and not rotating open. Well, he opposite of that would be the hips going back away from the ball.

So almost imagine like you’re sitting in a chair behind me here, and I’m going to sit down, but at the same time, I want to open my hips up.

Imagine like there’s a chair kind of facing at a 45° out toward these houses that I’m going to sit in, and my hips are going to kind of move down and back into that chair.

As I shift my weight to the left, my hips are also going to move down and back. You’ll notice that my upper body is almost leaning forward as I’m doing that. That’s OK for now. Let me go over how this is all going to work in a second.

Now the second piece is, when I do that stand up my body backs away from it. I’m going to tend to throw with my arms, I lose a lot of that lag and I start casting the club. It’s so common.

Well what you want to feel like is as you do that sit move, you actually go ahead and keep this left arm across your body. So as you sit, that club stays back in and the left arm’s across your body.

Then finally, you get this squaring up from the inside. So you want to feel like the club is way behind your body.

It’s almost going to feel like this way back in here, and as you sit and rotate like the Pros are doing, that’s going to square that back up coming down the target line.

Now, I know that’s a lot to go over. It seems like a lot of kind of weird moves. Let me give you a trick that’s going to allow you to put this into your swing right away.

Here’s what I want you to do. Go ahead and make a full follow through. My hips, my chest, my arms, everything is facing toward the target.

If you feel like in order to get your hips this open you have to open your front foot a little bit, that’s completely fine. That will make things a little easier for most players.

From here, I’m going to try to stay as close to this position as I can and get that club coming from the inside.

So my left arm’s going to go really across my body, and I’m going to have to rotate as little as possible to get my club coming from the inside.

That’s that same move. So we’re here, bending forward, and then go ahead and get the club back here to parallel from the inside as much as you can get it. That’s what the Pros are doing.

So if you watch this, this is the bad move. Stand up, lose my posture, flip. This is the good move. Sit down, rotate, club way from the inside.

Get that feeling of what I’m doing there, and the last piece here is to really let it go out to the right and release that club to hit the draw.

I’m going to have that same feeling of what I just did, and we’ll see if I can get that nice power draw as I’m doing that.

There we go, perfect. Right down the right-center of the fairway, drawing back into the middle. Could not have hit that one much better, and it flew a heck of a long way up there.

Now having this feeling in your swing is really going to help you to kind of get that Pro-type motion. Now there’s two things that I see when this happens, where players go wrong.

Number one, even if they get open, it tends to get the club over here steep. The reason for that is the face is just too open. So when my face is open, as I open up, I feel like I have to cast and come in steep to square the face up.

Now, the solution to this to get the club more shallow and to get this face squared up earlier, learn how to use the wrist properly to square that face from the inside. Now I have a series of videos that walks you through exactly how to do that.

This section of videos focuses solely in on shallowing that club from the inside and squaring that face up early so that you can just turn and burn, rotate as hard as you want to, and never have to worry about that ball going weak out to the right or having that kind of stand up and flip like we all hate to have.

It’s called The Move section. Now, you may have heard this before, I know a lot of players have had tremendous success with this, but I can’t overestimate just how good this series is for most players.

Most players come in too steep, and have the face way too open. If you can solve those two problems, golf gets a whole heck of a lot easier.

Now all you have to do as an All-Access Member of the Top Speed Golf System, is go ahead and click on the Instruction tab, click on the TSG System, click on The Move section, and walk through there.

There’s just a handful of videos, and once you go through those, I’m going to walk you through exactly how to shallow it out, square up the face early, and like I said, hit that nice, hard hit draw from the inside.

What we talked about here today on that Pro-caliber, that Pro-style move is going to pair up perfectly with this. I can’t wait to see you in The Move section.

C111. The Right Way To Have A Consistent Golf SwingPublished: Feb 2nd Get Access Now! 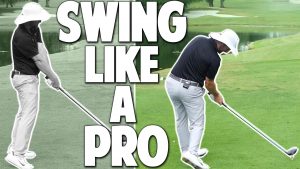