Why You Need This: What if there was a way to watch this Golf Tip for Distance video and you could gain the knowledge to help potentially hit the ball 50 plus yards further?

That's the case here with this video...

I know for a fact, a lot of people are making a particular mistake that is costing them some serious yardage...

The "Shoulder Turn" is one of the main components of the up swing and down swing...

It helps direct the flow of the mass motion/golf club relationship...

By getting the shoulders turned, we set ourselves up for maximum potential within our swing...

See the gains and losses as we examine the data for what a shoulder turn can do, to your stroke...

Watch this video now to make sure you aren't costing yourself massive yards...

Hi guys, welcome to Swing Speed Saturdays where you’re going to get the best information to improve your club head speed, and improve your distance.

The shoulder turn, huge when we’re talking about distance. The reason that shoulder turn matters in the power turn that we talk about in the Top Speed Golf System, really getting loaded up, is our body creates momentum.

All right, so in this scenario be really sure, very small shoulder turn, and I’m really going to try to rip the ball from there.

That feels tough, I don’t know if I can get much speed out of that. It looks like I only got 97 miles an hour of club head speed, so that’s pretty low for me. I’m going to go ahead and try a few more.

What I’m finding out here is my average club head speed was 92 miles an hour, which is quite a bit slower than what I would normally have, and I’m really trying to exaggerate here, getting a really small shoulder turn.

Kind of taking the extreme of what somebody would do if they’re really struggling getting a shoulder turn at all.

Now what I’m going to do is I’m going to reset the flight scope. I’m going to make several more swings making a good, full shoulder turn, and let’s see how this distance improves.

There’s two things I want you to key in on when you’re making a bigger shoulder turn. Let’s set up this ball, the very first thing is I want to make sure I get that turn early.

My club gets about parallel with the ground, my shoulders are going to turn at least 45° at this point, I want them to go even a little bit more than that if at all possible.

Now from here, I want you to imagine your shirt buttons are turning away from the target. This is one thing people tend to struggle with is they get really quick, they pick the club up with the arms, the shoulders don’t turn.

I want to make sure I move the shoulders first and then I get really comfortable taking my shirt buttons here, and rotating them to where not only are they pointing back, but even a little farther to the right, and I’m turning completely away from the target as I’m doing that.

That’s going to allow me to load up, and it’s going to give me a lot more momentum coming down.

So now I’m going to hit about four or five shots, and we’ll see how this really bumps up my swing speed.

That was 317, club speed was 112 was all. 311. All right, so even though I didn’t make some of my better swings, I didn’t catch all those dead solid, I did try to make a good, full turn, and we can see my numbers really bumped up.

Here my average club head speed was 112, that’s pretty close to being right around the tour average. So my swing speed earlier if I remember correctly was around 90 or so, 92. So I almost picked up 20 miles an hour club head speed, that’s huge.

That’s upwards of 50 or 60 yards in maximum distance. We’ll see that my total distance here on average was 303. So again, I hit a couple of those that weren’t the best, I think my longest one was 317, but definitely picked up huge, huge amounts of yards there and hit it a lot better.

That just shows you just how much club head speed comes from making a good, full turn coming back in the power turn, just like we talk about in our Top Speed Golf System.

So when you go out and practice, focus in on those two key areas. Number one, I want to go nice and slow in the takeaway, get those shoulders to turn early, at least 45° as you’re about halfway back.

Then number two, as I’m continuing back, I want my shirt buttons to turn away from the target. So I’ve got to get comfortable turning completely away from the target, and that’s going to allow me to load up, create that momentum starting down, and really boost those yards.

So good luck to you guys, work on those two keys, and I’ll see you all soon. 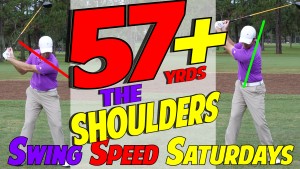