Why You Need This: In this video, you’ll discover how to stop hooking the golf ball.

Now, I’m sure you’ve been in this situation:

You think you made a great swing, but you look up and see your ball hooking like crazy.

How in the heck did that happen?

Well, we've all been there, so don't worry.

In this video, you’ll see the science behind the pull hook and examine what your club is doing in the downswing and through contact.

You’ll also get a few tips on how to eliminate that awful hook for good.

Watch this video now to stop hooking and blast your shots straight down the fairways!

Oh, man, the pull hook! Extremely frustrating. You feel like you’re making a good swing, you hit the ball, it’s nice and solid, takes off like a rocket, but when you look up, it’s already going to left and hooking even farther left.

It’s extremely frustrating. I’m going to teach you what’s the real science behind the pull hook, and you’ve actually probably been taught the wrong thing, you’re actually not swinging too far to the left.

I’ll get to the science behind this so you guys can fix this once and for all, and eliminate the hooks from your game. Let’s go ahead and get started.

The double cross, one of the most widely misunderstood shots in golf. A lot of times when we make a swing we hit a hook just like we did on the FlightScope there. We look up, the ball’s already a little bit left and it’s turning harder and harder left.

But if we take a look at the FlightScope numbers, you’ll see on that video that I just took, the path or the direction my club is swinging, I kind of have it represented with this U-shaped PVC thing, and this is going to be tilted out to the right.

So it feels like I swung left when in reality I swung right. Now as that happens a lot of times people will tell you, your playing partners will tell you, you’re coming over the top, you’re double crossing the ball, you need to swing a little bit more to the right.

Excuse me, you swing more to the right to solve that. The path already to the right, you’re going even farther to the right, and you just start hooking and double crossing even more.

So we have this set up to the right. What we need to do is to get this set up straight with our target so that everything’s coming through nice and straight. The face is straight, the path is straight, and that’s going to solve our issue. Let me show you exactly what you need to do.

All right, so I’m going to hit a shot here, I’m going to give you a feeling and example that’s going to feel like you’re going to the left. In reality, like we just talked about, your club is swinging to the right, your face is closing in relationship to that path and the ball is starting at the target and hooking dead to the left

So what we have to do is basically the opposite of that. We have to get the opposite feeling, and that’s going to straighten it out. Ideally, our club will be going perfectly straight, our face would be straight, and we’ll get that nice straight ball flight.

The shortest distance between two points is a straight line, you’re going to get the most accurate and longest drives if you can hit the ball straight. When I set up here, again I’m going to go to this blue flag straight up in front.

You can see here this would be basically parallel with that blue flag. Now if I’m going to exaggerate and really try to feel like I’m getting that slice, the first thing that I want to do, I want to go ahead and open up my stance a little bit.

Now we’re only going to do this for a short period of time as we’re working through these drills, and then we can square it back up. But if I’m double crossing, I’m snap hooking, I’ve got to get myself out of it immediately on the next hole, and make sure that I can get a little bit of a fade on that shot.

My path, the direction I’m swinging is going to be left, but I’m going to feel like my hand is moving straight down toward the target. That’s a very good feeling to hit a bit of a fade.

There we go, so I really exaggerated that one, started that one way to the left. Really started to fade that one back, and what I would do is I would keep on hitting a couple shots until I got that ball to start pretty much at the target, and then have a bit of a fade.

There we go, that is about a five-yard fade, just started to the left of the target, and now it’s turning back over. Again, I’m going to adjust how much open my stance, I’m going to feel like my face is kind of holding open, and I’m going to hit kind of a soft fade out there.

You may lose a little bit of distance right off the bat, but you’re going to immediately get rid of that snap hook because we’re doing the opposite of what we were before.

Now as you get more and more comfortable with that, we’ve got to find that medium zone where instead of aiming left, I’m going to aim straight, and instead of felling like I hold open the face, I can go ahead and start to let that face roll on over a little bit to get that nice straight shot.

So if you do that, work with your feel. If you start to slice the ball, it’s OK to turn the hands over a little bit more. If you get the ball starting to the left and slicing back, that’s what we want to do immediately, and then we can work it down from there.

Work with those two feelings. Get about 100 practice swings aiming left, path of the hand moving down the target line. That’s going to allow you to get that hook immediately away, and then you can play better golf from there. 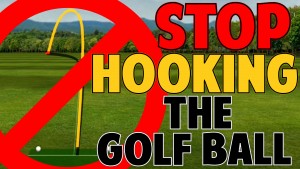