Why You Need This: In this video, you’ll discover how to spin back your wedges.

Spinning a shot back is the most fun shot in golf.

I’m sure you’d love to hit dead solid shots, then have the ball spin back toward the pin.

Well, in this video you’ll learn how.

There are 3 keys to getting your wedge shots to spin back...

First, you’ll learn how the gear effect can either help spin or hurt spin.

Also find out why it pays to make contact near the toe of the wedge to get more spin.

Second, you’ll learn how much forward shaft lean will give you more spin.

Finally, you need to take an aggressive swing so you can accelerate and sort of "pinch" the ball.

Watch this video now to have tons of fun...

Hey guys, and welcome back. We’re going to do the most fun shot in golf. Everybody wants to hit those dead solid shots that land on the green, and then spin back 10, 15, 20 feet. Depending on the type of green you’re hitting on, the slope of the green, that may or may not be possible.

But in today’s video, I’m going to show you how to get that ball spinning back and having a good time doing it. We’re going to focus in on three keys that are going to help you to do this.

So key number one, let’s talk about the gear effect when we’re going to hit any kind of shot, and how it can either hurt spin or help spin.

As I make contact with the golf club, if I hit the ball slightly low on the face, what happens is the face is going to turn down a little bit and since the ball is stuck to the face at contact, as the ball – let’s go ahead and get really close here, I’ll try to get this lined up with the camera.

So as this club face turns down, it actually gets the ball to spin up a little bit more, and that’s what’s called the gear effect, so it adds spin. If I hit the ball high on the face, let’s say I had this wedge teed up, it’s going to roll back and actually put a little bit. Think of it as topspin, really it’s just less backspin that’s going to get on there.

Now the next thing we’ll talk about here, and the reason that most players have a really difficult time getting spin is if you want to get a lot of spin on the golf ball, we’ve got to have a lot of forward shaft lean to really be compressing this golf ball.

The optimum zone, or the optimum rate for the most spin you can get is going to be somewhere around 50°. So I have – and that’s between my angle of attack and the loft on my wedge. That sounds really complicated, but let me explain that to you.

If my angle of attack is -5° and my loft on the club is 56°, that’s 61° difference in those two angles. So I’m actually going to lose a little bit of spin there. I need to have about 10° or maybe just slightly more of forward shaft lean at contact to be able to get that spin wedge or that loft down around 50° difference.

Here’s how we’re going to do this. The tough thing is when you try to get more forward shaft lean, what’s usually going to happen is your club face is going to start to open up like this.

Now all of a sudden, I’m really getting a lot of forward shaft lean on that club. I can really pinch ball and compress that golf ball. That’s going to be really good for getting a lot of spin on there.

Finally, I want to make sure that I take a good aggressive swing. I can’t be timid, I’ve got to really accelerate through that ball, I’ve got to let that club go. I want to kind of pinch and hit a little bit of turf in front of the golf ball.

So if I put those three things together, a little bit lower on the face. So if this is the center of the face here, I’m just going to go a groove lower than that. Little bit off the toe would be awesome too.

Number two, I’m going to rotate that club face down so I can get more forward shaft lean, and then number three, I’m going to accelerate and feel like I’m pinching that ball into the ground, really feeling almost like you’re trapping the ball against the ground, and I’m going to let the loft lift that up onto the turf.

I’m going to hit a couple shots here. I’ll show you guys these, we’ll put a camera up on the green, and you’ll start to see those spinning back. It’ll be a lot of fun. So go ahead and get your reps in, 50 reps each, of each of those three things, and then go ahead and take it out to the course.

Get anywhere from that 80 to 120-yard range, that’s going to be your maximum spin range where you can have tons of fun. Find the green with a nice gentle slope rolling back to you, that’s going to get you the most spin. Have fun, and we’ll see if we can spin a few back. 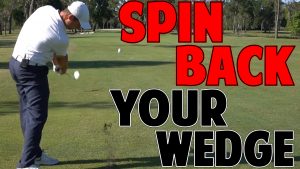