Why You Need This: In this video, "How to Increase Your Golf Swing Speed With a Baseball Step," I'll analyze one of the infamous swinging techniques known around the golf universe...

Let me break down "Ground Force reaction" to you...

There is a lot of science involved in this swing...

While I would never suggest doing this swing all the time because it's very inconsistent, I would suggest trying it because you'll learn about the power turn and how to plant your front leg, which will help you while performing your regular swing...

Watch this video today so you can maximize your release and pick up distance...and feel like Happy Gilmore :-)!

All right, we’re into a fun video for this Swing Speed Saturday. I was just out her finishing up some other videos, and just kind of messing around with the flight scope tracking some balls.

One of the things I’ve always done ever since I was little, was I realized if I take a step, so if I actually take a step with my right foot just like I’m swinging and hitting a baseball, I can hit much, much farther.

Now the consistency isn’t as good, it’s not something that you’d really want to do in your actual golf swing, but the swing speed went up right away. The reason is something that’s called ground force reaction and being able to release the club.

I’m sure you’re all familiar with Newton’s Third Law which is every action has an equal and opposite reaction. As I’m swinging this golf club, if I want to swing it with some serious speed, I need to have some pressure going from my left ankle up as I’m driving into this ball, or coming through this shot.

So what I’m doing here, is I’m driving into my left leg and that pressure is going up and back. Just like we talk about in the compression line, as I’m going up and back my left ankle, left hip, left shoulder are all slightly angled back and that’s going upward pressure as I’m driving into the ground to allow my club to release out in front, down and away like we talk about in the straight line release.

Plus it gets you to rotate a little bit more, which also bumps up some club head speed. I’m going to go ahead and try out a few shots here, and then let’s take a look at my normal swing versus a baseball swing, and let’s see what it gives us.

That was off the planet.

All right, so first off we started hooking some shots right off the bat when I did the baseball swing, but I want to compare some of the stats here. It’s pretty interesting, definitely picked up some speed and some yardage.

Overall, pretty solid shots, pretty typical swings, wasn’t swinging very hard, 111-112 miles an hour, so I wasn’t really trying to go after it at all.

Spin was a little bit higher so it didn’t go quite as good as they could have been. I could have really ripped some of those with that type of swing.

Overall it just shows you that if we can get a rotation with the body like we talk about in the Power Turn in the Top Speed Golf System, if we can rotate through the shot, if we can get that ground force reaction to start bracing up to release the club into the straight line release better, that’s going to get you more distance.

So it’s just kind of a fun thing for today’s video. Hope you guys enjoyed that. Good luck with your golf game.

Don’t have to go out here and do this, but it wouldn’t hurt to make a few baseball swings, take that step, and get used to really planting into the left side and releasing the club to get a feel for what you want to do when you’re actually swinging, keep the left foot on the ground, we don’t want to be taking a step so you get more consistency though. 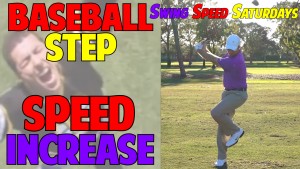