Why You Need This: In this video, you’ll learn how to hit low penetrating shots into the wind.

So, have you ever felt powerless when hitting into the wind?

Shot after shot, the ball balloons high and you lose distance?

It’s a common problem with golfers…

So in this video, you get some great tips to overcome intimidating wind gusts.

You’ll learn how to hit low shots that penetrate the wind.

Here are the key tips you’ll get…

Watch this video now to conquer those tough, wind-in-the-face holes!

SS008. How to Hit Low Penetrating Shots into the Wind

We’re going to talk about sometimes you’ll find yourself, especially on a windy day, that wind’s blowing right back in your face. You try to make your normal swing, the ball balloons up in the air and goes like 30 yards shorter.

How do we get those low penetrating shots that just cut right through the wind and get on the green? Robin, what are some things I need to work on when I’m doing this?

Robin: First thing you want to do is, let’s go one club up. The reason why we’re going one club up, is one, it has a little bit less loft. It’s automatically going to flight the ball down just a little bit longer.

Clay: Within these swings, if normally it’s a pitching wedge shot, I’m going to take a 9 iron or maybe even an 8 iron.

Like he said, every club has about 4° less loft, so it’s going to start out with 4° or 8° less loft, meaning the ball’s going to come out a lot lower with less spin right there.

One of the problems with that is, well I’ve got my pitching wedge distance shot, and all of a sudden, I’m swinging my 8 iron, why is that just going to fly 30 yards farther and go right over the green.

Robin: Yeah, the reason why we’re going to swing with this, we’re taking that one extra club more so we can swing a little smoother. By choking up – we’re also going to choke up when I tee – you’re going to smooth so you don’t hit hard-hitter, super-high spinny shot.

Clay: So we’re only hitting about 80 percent, because sometimes that’s the same thing.

Clay: I’ll get in there and try to really rip one, and it spins even more. I’ll swing harder and it just goes higher, it doesn’t go any farther.

Robin: Let’s say about an inch more than we usually do there.

Clay: So yeah, that’s going to slow it down too, also. If I have a pitching wedge, it’s obviously a shorter wedge. If I even make a full swing, pitching wedge, because of the shorter length of shaft isn’t going to go as fast as a driver.

Robin: You can swing as hard as you can, it’s not going to go as fast as that longer-shafted driver. Exactly.

Last piece, and a question I get all the time is where should I play the ball position if I’m doing this kind of shot.

Robin: So go ahead and take your normal ball position with that club there. All we want to do is put it like, let’s say about a ball a little bit further back than we have it normally.

You don’t want to put it way back there so you’ll hit super down on it and then create more spin, let’s just put it a ball more than we normally have it in our stance.

That’s automatically flight the ball down, and with our more club with less loft, and now we’re choking down and swinging a little bit smoother with it.

Clay: So if I put it way back here in my stance like this, and I see a lot of people do this, now I’m hitting down into it so much, that it’s almost going to start to balloon up, I’m almost adding spin to it.

I just want to play it a little bit back in my stance, that helps me to hit down into it slightly more, not a ton, but just a little bit.

Clay: Let’s recap here. So number one, let’s pretend I’ve got my normal club, I’m going to take at least one or maybe two clubs extra. That would normally fly too far, so I’m going to choke up on this to make it go a little shorter.

Then I’m only going to swing 80 percent to also make it go a little shorter. So now I can take my normal swing, I don’t have to change my technique, and I’m just going to play the ball slightly back in the stance.

If I do that, that should help take a lot of spin off of it and penetrate right through the wind.

Clay: Yeah. Best of luck guys. Get those windy shots, follow the steps, it’s going to help you a ton. 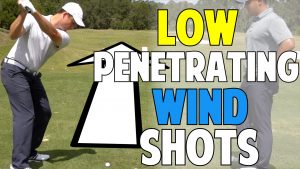