Why You Need This: In this video, you'll learn how to hit a buried bunker shot.

You hit the ball into a bunker then you just hope that you have a decent lie.

Once you get up to the bunker to check out the damage...

You discover that your lie couldn't be worse.

The sucker is almost completely buried!

Whack it as hard as you can?

Pick it out a bit when your buddies aren't looking? ;)

In this video, you'll learn how to hit a great shot out of the bunker.

I’m going to go over a ball that’s just a little bit sitting down on the sand, a fried egg shot, and a completely buried shot. We’re going to talk about how to get out of the bunker, get on the green, and just get out of this trouble.

So first let’s go over what is our normal bunker shot. If I was going to set up this, say imagine that I had just a perfectly clean lie, I’m going to go ahead and open up the face quite a bit.

This is my 60° wedge. I have a face about 30° or 45° open. I’m regripping the club, and then when I look down at it, it’s almost looking like it’s pointing straight up toward the sky.

I’m going to put the ball a little bit up in my stance, favor my left side, and make a big, aggressive swing. I’m going to go ahead and let my wrist release, so almost like a little bit of a flip at the bottom.

So depending on how buried the shot is, we’re going to need to vary that a little bit. That flange that helps the club glide through the sand is our best friend with a good lie.

With a buried lie, we almost have to get away from this and just get the ball out and actually get rid of some of that, use a little bit more of the leading edge in extreme cases. I’ll get to that here in a second.

If I’m just a little bit buried, I pretty much want to go ahead and use my same technique that I would use with a normal bunker shot.

Now here’s the only difference. If I put it up in my stance, that’s usually what I want to do to hit behind the ball, get the club coming in nice and shallow, get that ball to pop up, good clean shot.

If it’s a little bit worse of a lie, instead of having a little bit more up in my stance, let’s say it’s right here normally. I’m going to scoot my feet up about an inch or two and I’m going to put it more toward the middle of my stance.

Now as I do that, I need to open my feet just a little bit more to counterbalance me hitting down. I don’t want that ball to shoot out to the right.

Here if I was hitting a clean shot, even though this is about a, let’s say, 45 feet, 50 feet from the flag, this is going to be around the aggressiveness I would use to hit about a 50 or 60 yard 60° wedge, normally.

Now I’m just going to hit down behind that ball, let the sand do the work to pop it up out of there.

There we go, so that came out nice and clean. I got about a six-footer or so, just short left of the pin. So nice up-hill putt, perfectly done there.

Now the fried egg, that one gets a little bit tougher, because now I don’t really know if I can get down to the ball.

If my club comes down and hits the sand first, and this flange catches the sand and lets it slide through the sand level with the ground, kind of imagine like this, well I might come down and my leading edge may hit right in the middle of the golf ball.

I could hit that ball and it would shoot across the green, it may just smack right into this lip and pop up and stay in the bunker, that wouldn’t be any good.

Or if I get tentative and I hit too far behind it and my club dies, then I’m just going to leave the ball in the sand anyways, it’s going to go two or three feet.

Here, instead of having the club quite as open, so this would be my normal amount, let’s say 30° or 40° open, I’m going to go ahead and turn that down to where it’s just about 20° open. Still pretty open, still using the loft of the club.

Then I want to use a lot of force to make sure that this ball gets up and out. So my club is just a little bit less open, still pretty good and open compared to what most people do.

Ball’s more back in the stance. Stance is open, and now I’m just going to hit down and really, really hammer into this ball, make a nice aggressive swing. Let’s see how this comes out.

There we go. Again, took a lot of sand behind it, a little bit better than the first one, I’ve got about a four-footer just up and to the left of the pin.

So two good shots. You can see it on this one also, notice on the first one I was nice and aggressive. This would be deeper than my normal shot, let’s go ahead and do a normal swing here.

There’s my normal depth on my bunker shot. So nice and shallow divot, this one I took out a little bit more real estate and it went a little bit deeper. This one is super deep, you can see I got a lot of, I took a lot of sand out of there.

There’s sand 25 feet in front of me on the green. That’s like a full lob wedge shot. If I’d hit this on a fairway, that would have went 80-85 yards. So I’m really making an aggressive swing when I’m doing that, even though that ball didn’t go very far.

The reason it didn’t go very far is just because I took out a lot of sand with it, and it slowed down my club.

Here this ball is completely buried. This is a tough one. No matter how good you get, these are never easy. There’s no way, nobody gets good enough to say I’m going to accurately be able to do this. It’s a bit of a guessing game here.

But I don’t want to open it so much that I can’t get my club underneath this ball. So as your club starts to hit that sand, if the leading edge catches the sand, it’s going to dig down into the sand. If the flange catches it, it’s going to come in through very nice and level.

With a normal shot that’s good, but if I open this club wide open, I’m going to not be able to get underneath that ball. I need to go ahead and use basically what I would say is a square club face, is what I would normally do.

So I’ve got about, let’s say 70° of loft on this. I’m going to again come down pretty steep into this ball, and I’m just going to try to explode it, take out a ton of sand and get it up on the green.

Now the main difference here is, I want to judge how soft this sand is. If it’s nice, soft sand, I’m going to hit a good two or three inches behind that golf ball, and I’m just going to take up a cubic yard of sand.

I’m going to try to take bulldozer load of sand and throw it up there on the green, just to make sure I get everything up there.

If it’s really tough firmer sand, I’m going to hit a little bit closer behind the ball, and I may not be as aggressive.

So this is pretty soft, I’m going to have my face open maybe about 70° or so. Ball back in my stance again. As the ball gets more and more buried, I have to not open the face quite as much.

Then here, I’m going to chop down straight, two or three inches behind this ball, and I’m going to make a swing like I was going to hit this lob wedge 120 yards, is what I’m going to feel like.

The reason it’s not going to go too far is because I’m hitting behind the ball, I’m letting the sand explode the ball up on the green, rather than making direct contact with the ball and the face.

Let’s try it out. There we go. That one came out, too. Oh, that one rolled up there pretty good. That’s all I could hope for there. You can see how deep that is, my entire club would be below the surface of the sand and I got about a six or seven-footer up there.

So try those out, as the ball gets more and more buried we’ve got to get more aggressive. Ball goes farther back in our stance, and the club face goes from really open to just a little bit open.

Try those out, hit about 50 or 60 shots in the bunker, you guys are going to be masters of those buried shots. 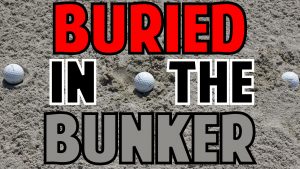