Why You Need This: In this putting video, you'll learn how to get the perfect roll on the golf ball every time.

So, have you ever seen PGA tour players get really hot with their putters?

The ball rolls perfectly end over end, and it's almost like the ball is being sucked into the hole.

This video will help you roll your putts well so you can get white hot with your putter.

The device used in the video is called the Roll Board, and it'll give you instant feedback on if you're rolling the ball like you should.

After you putt the ball, look at the Roll Board to see how your ball tracked while rolling.

You should see a nice smooth line without any jumps.

So, how do you get your putts to roll perfectly?

At impact, your putter should have a small amount of forward shaft lean and you should hit slightly up through the ball.

This will help you get the perfect amount of topspin for a consistent roll towards the hole.

In the video, you'll also find out the most common incorrect putting methods that I see with my students.

If you're putting with one of those methods, stop and learn the proper putting method described in the video.

Watch this video now to get some great putting tips and see a really cool putting aid that'll help you putt with pro-like roll!

Hi guys, and welcome back to Top Speed Golf. Today I’ve got a great device for you to help you get that perfect roll on your putts.

Have you ever been watching the guys on the PGA Tour, they get really hot with the putter, and as soon as they hit the ball it seems like it’s suction cupped to the green, it’s rolling end over end, and tracking right into the hole, time and after time.

Jordan Spieth does this a lot when he gets really hot with the putter, and it’s really fun to watch.

Well, this device from EyeLine Golf is called the roll board, and it’s going to tell you if you’re getting that perfect roll. It has a small amount of felt on this board, and I’ll go ahead and set a putt up here right in the center of this board. I’ll try to get a pretty good roll on this, we’ll see how I do.

There we go, and now what this is going to allow you to do, is as you look at the board, you lift it up and look at it, it’s going to show you, and if you have a nice, consistently thick line the entire way, that’s telling you that your ball isn’t bouncing up and down on the green.

If we do this properly, we’re going to have a little bit of loft on our putter face naturally. As we’re coming through contact, we’re going t have just a tiny bit of forward shaft lean, meaning my shaft is going to be leaning forward just very slightly until I just have one or two degrees of loft.

I’m going to be putting very, very slightly up on the ball. That’s going to get that top spin, or that ball rolling end over end right away, if I do this properly.

There’s two ways to do this improperly, let me go ahead and line a ball up on the left side of this board. This time I’m going to hit down into the ball, meaning my putter face is moving down on a very descending blow.

My loft on the putter head is very down, and now I’m smashing this ball into the ground. It’s going to start hopping along the way.

As I do this, I’m going to exaggerate and hit this one a little bit harder so you can really see this, and that ball is going to smash into the ground and start bouncing up and down. When we look at this roll board now, the line is going to actually disappear for a little bit, and then start again, and disappear.

That’s the ball hopping up and down on the ground. If you’re doing this just a little bit, the line gets real skinny, and then thicker, and then skinny again. That’s that ball slightly bouncing on the ground.

That’s the first mistake that we can make. The second one is if we’re actually doing the opposite of that, where we’re hitting up into the ball. Now the putter head’s moving up, we have too much loft on the face, and that’s hitting the ball up into the air and it’s bouncing on the ground.

The added loft is kind of like a wedge hitting it up into the air, to a lower extent. If I do that, again, I’m going to exaggerate so you guys can really see this. I could really hear that one bounce up in the air, because it actually hit off the board and then landed on the board, you could hear it.

What we want to do to adjust this properly, is to make sure that we have our ball in the correct position. You’ll see that there’s a black line here, and what I would do is I would line up a few balls – let me go ahead and grab one out of the cup.

Let’s say that I roll my first ball and I can see that it’s getting thin, and then thick again, or it’s coming off the board. Well I’m not really sure if I’m hitting down into the ball, or if I’m up into the ball. The easiest way to adjust for this, is let’s go ahead and start out in our normal position, our normal ball set up.

If I was tending to hit too far down, moving it up slightly is going to get me a better roll end over end. I’d go ahead and putt one from here, I’d check the roll board again. Is it getting that nice, smooth line? If so, I’m going to keep that ball position.

Let’s imagine I had the opposite problem, and I hit and I’m using my standard position here for the ball, and I’m seeing that it’s not rolling exactly right, and I go the other way.

Maybe this time, my error is hitting up into it. I’m going to move the ball back in my stance, that’s going to get me hitting a little bit more down into the ball. Then I’m going to roll one and see if it’s perfectly level from there.

First off what I recommend is, putt about 10 putts on this board. See how your natural stroke does. Then, if you’re not getting that perfect roll, first try moving it up, checking again to see if it’s rolling better. If it is, keep that new forward ball position.

If it’s rolling even worse, then that means your ball was going a little bit too far up, you’re going to want to move it back, that’s going to help you to hit down. You’re just going to adjust your ball position until you get that perfect roll. Simplify things in the stroke.

You could make some changes to your actual stroke fundamentals themselves, and that’s more along the lines of what I’d go over in the Top Speed Golf System, the putting system that I have on the website.

But for here, let’s keep things simple. Roll a few on the board, get that nice roll, play with your ball position. You’re going to start draining more putts. Good luck to you guys.

SH070. This Is The Most Important Thing in Pitching Like a Golf ProPublished: Aug 10th Get Access Now! 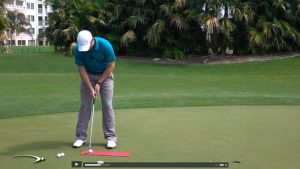