Why You Need This: Today, you'll discover "How To Get The Hands AHEAD Of The Ball At Impact | PVC Pipe Drill"

...unless you have forward shaft lean at impact.

If you struggle with a ton of thin shots, this is likely the reason why...

...but today, I’ve got a great drill that uses a PVC pipe…

...so that you’ll finally get that forward shaft lean.

Now you can finally start hitting that sweet spot consistently & not need a perfect lie to do it!

Quentin Patterson: If you want to hit your irons solid, then you have to get the hands in front of the ball at impact.

Now you know that getting the hands in front is going to deloft the face and get you more compression, but it’s also going to really improve the contact that you make on the face.

So let me show you here. If I have this club, I have it straight up and down, no shaft lean, look where the contact point is. It’s maybe one or two grooves up on the face.

Now if I start leaning that shaft forward, that contact point goes up to fourth or fifth groove on the face which is going to be more in the sweet spot of the face.

What this means is, if you’re someone who doesn’t get the hands ahead, your best-case scenario is basically to hit it thin, right?

The only way you’re not going to is if the ball is sitting up on the grass like it’s on a tee, and it’s rarely actually going to be like that.

When you look at players that early release, the hips kind of square up. We throw the arms in front, and this club is more perpendicular to my chest.

So I have a great drill for you that’s going to help you get that proper feeling of getting that club to more parallel with your chest as you’re coming through impact.

What we’re going to do initially here, is we’re just going to take some three-quarters swings where we turn up here.

That’s going to help you to learn the proper rotation and train your body to rotate in the right way instead of throwing it in front.

What do we need to be feeling in our feet? Well, what we need to feel is a transfer of pressure into our lead foot, so that way that’s going to allow us to get lower into the ground.

So what you want to imagine here, is that you’re pushing down into the ground and then out away from you as about a 45° angle.

That’s going to help me drive my hip back, so I want to kind of squat pressure into my lead leg and then drive that hip back out of the way.

You almost want to imagine there’s a rope attached to your belt loop here. The rope’s kind of going around your side.

Then you’ve got a buddy over here pulling on that rope and they’re ripping your hips open as you’re coming through.

I’m not going to let it go, I’m not going to throw my arms in front. The only thing that’s bringing this club into the ball is the rotation of my body. I’m going to really, really exaggerate that.

I have a 7 iron here. Dynamic loft, dynamic loft is the loft that you’re presenting to the ball at impact. Good dynamic loft for a 7 iron is going to be about 23°.

What we’re going to do is we’re actually going to hit a ball here. I’m going to go really, really slow. I’m going to try to get as far below 23° as I can.

This is going to be a shorter swing. Again, it’s going to be like a three-quarters swing. I’m only turning to where this club gets parallel with my chest. I’m going to try and turn all the way through.

Again, I’m not going for speed here. I’m going to get that shaft lean, to get that rotation, as much as possibly can.

You’re doing the same thing you did with the pipe, you’re starting out slow, and then building up the speed.

One thing you can also do if you’re not hitting off of a mat to make it a little bit easier in the beginning when you’re going slow, is to tee the ball up.

So I’m hitting off a mat here, so I don’t need to tee it up. What I’m going to do, again, I’m going to take my normal stance and I’m going to try and go here, and then really try to get that shaft leaning forward as I’m coming through, all rotation of my body.

Let’s see how low we can get it to come out. All right, so that was really, really well-compressed. I mentioned that 23° is pretty good. I got that to be 12.4°, that’s like almost half of what it normally is.

So what I would do there, once I saw that, that was only 61 miles per hour. I would try to build that up.

Now you don’t have to have a fancy launch monitor tell you this, you’re going to see for yourself that it’s going to go a lot lower than what you normally do.

What may be a good exercise to begin with, is to hit some shots to get an idea of how high that ball is launching initially. Then you can do these shots and you’ll be amazed at how much lower it goes and how much more compressed it’s going to feel.

So start out slow with it. Again, the idea in the beginning is not to go really fast. The idea is to get that ball to launch as low as possible.

You want to imagine you’re hitting that ball underneath a doorway. Really, really low. Once you get more comfortable with that, now once we kind of get up to full speed with that, just like you did with the pipe and you don’t see the ball flight start to raise too much.

If it starts to raise too much, then go a little bit slower and then start to build it back up again. What you can do is try to build this up more toward a full swing.

So again, we want to do the same thing, but we’re going to go a full swing, right? Full back swing, and when you come through and you get here, what I want you do is you can actually take this pipe, you can turn it over.

So if I turn this way, you’re going to get here, and then you can turn that over and go into the full finish and still make it to where it avoids your side.

Now what I’m going to do, is I’m going to try that same thing with my 7 iron again with a full swing. Again, I’m going slow. I’m not trying to go full speed with it.

You’re going to have to resist the temptation to go full speed with it, because I’m telling you, the moment you go to full speed with this right away, you may see it change a little bit, but most likely it’s still going to be pretty flippy.

Now in a full swing, I’m probably not going to be able to get 12.4°, but I want to see it fly a lot, lot lower. So my normal club head speed with a 7 iron is probably around 95.

I’m going to try to take a full swing here, it’s still getting that shaft lean as I’m coming through, and see just go nice and slow and see how low I can get it going, nice and slow.

If I go to fast, then I’ll need to try and do it a little bit slower here. Let’s see how I can do here. All right, so that one there I was able to do it in a full swing, get lots of shaft lean, 13.7° on my dynamic loft.

So from there, we need to learn the proper wrist angles that get that club face squared up. The reason is, is that if you’re someone who’s used to flipping when you come into contact, no shaft lean, well you’ve essentially trained your lead wrist to be cupped at impact, and your trail wrist to be flat.

Well, if I do that and I get the hands in front, well now my club face is wide open. I have a new problem, right?

So now I need to learn the proper wrist angles to get that club face more square as we come into contact.

You know you’re going to hit it solid, and that’s what we want for everybody. So to get to that Move course, all you have to do is click the Instruction tab, then click the Top Speed Golf System, go to The Move from there.

Specifically, the Tennis Racket Drill is a really good one to help you get that face squaring earlier in the start of the downswing, and get that shallowing out.

So go there, work through that drill along with this PVC pipe drill, you’re going to start striping it.

Talk to you soon. 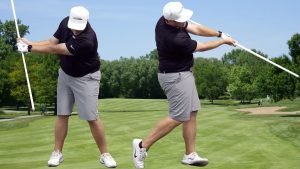