Why You Need This: In this video, you’ll discover how to get out of the bunker easily.

Bunker shots are incredibly tough for most golfers.

It’s easy to leave the ball in the bunker, skull it out way past the hole, or hit the most dreaded shot in golf -- the shank!

But, don’t let the bunker frustrate you or embarrass you in front of your playing buddies.

I use a cool training aid called the Bunker Pro.

It’s a simple system that forces you to swing with the correct moves to get out of the bunker every time.

One of the most notable features of the Bunker Pro is the shank protector (sort of rod that sticks out from the base).

The shank protector prevents you from getting your hosel too close to the ball.

First, set the Bunker Pro about 2 inches from your ball.

Next open your club face about 35 to 45 degrees and use your normal grip.

As you swing into your bunker shot, aim for the open area created by the Bunker Pro.

Also, let your wrists hinge on through.

You wouldn’t want to flip your wrists through a normal swing, but you should for bunker shots.

If you hit the open area created by the Bunker Pro, the ball will pop up nicely.

Watch this video to learn how to pop your bunker shots out of the bunker every time!

Hi guys, welcome back. I know it’s really tough sometimes, we hit our shot into the bunker. We leave it in the bunker, we scull it out way across the bunker, it starts running across the green. The worst ever, we hit that hosel rocket shank that shoots 90° to the right.

Extremely frustrating, and really embarrassing when we get in the bunker and we can’t get out. Well there’s a great product here called the Bunker Pro from EyeLine Golf. This is a great system for just kind of a surefire way to get the overall basics of hitting a bunker shot and getting out of the bunker every time.

Let me go over exactly how this will work. I’m going to line this up, this edge, with the direction that I want to hit the shot.

Then we’ll see this is what’s called a shank protector, so if I come through and my club hits this little rod there, and that means that I’m getting pretty close to maybe shanking this ball, I want to stay away from that rod.

Then just on the inside of that you’ll see it says to place your ball two inches on this side of this piece of plastic or this shank protector. That’s exactly how I have it set up there.

From here, I want to have my club face wide open. If you go ahead and set up your club, I’m going to rotate the face open about 35° or 45° and take my normal grip. That’s going to ensure when I set down this face is going to be wide open.

I’m going to place the ball a little up in my stance, so you can see if I draw a line that’s going to go slightly toward the front side of my stance. My stance is going to be slightly open, and now when I come down you see that there’s this rounded area here.

I want to have my club smack into the sand in that rounded area, then it’s going to slide right underneath the golf ball. It’s going to pop the golf ball up in the air, and I’m going to have a nice, clean shot.

So again, face open. I’m going to thump the sand behind the ball, and lastly here, I can go ahead and have my wrist kind of hinge on through.

Wouldn’t want to do this in a full swing, that would be a flip, but for a bunker shot we’re going to get that bounce to kick through the sand and to really get that ball coming up nice and high with a lot of bite on it. Let’s go ahead and try that out.

There we go, nice and sot, little bit long on that one, but we some o the sand kind o push that over there that way. But overall, a nice, clean shot. I’m going to get out every single time with the Bunker Pro. 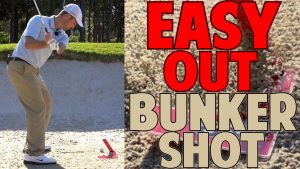