Why You Need This: In this video, you’ll discover how to get lag in your golf swing.

You’ll learn, in crazy detail, how your left wrist moves so you can build and release more lag and increase your swing speed.

Before you get the details of the left wrist, you’ll get a drill to get a feeling of whipping your club through impact.

With your right arm only, swing the club in a circular path slowly and whip it through as the club approaches the ground.

The key move here is to not hurry the club when it’s above your head.

Similar to a real golf swing, I want you to feel how the club travels slowly except for when you snap it through contact.

This is how it should feel when you maintain and release your lag in the swing.

Next, you’ll learn tons about how to move your left wrist to hit with more lag.

In the backswing, keep your wrist loose and don’t set your wrists fully until you start the downswing.

Bow your left wrist to help deloft the club with forward shaft lean (key move to compress the ball).

Near impact, remember to get the whipping feel that you practiced earlier.

Practice these moves with just your left arm only.

This will help ingrain the lag producing moves.

Later practice with both hands and snap the clubhead through contact.

Watch this video now to learn how your left wrist moves during the swing and how to get lag in your golf swing!

Hey guys, welcome back. In this video we’re going to talk about how to get a lot of lag in your golf swing, and we’re really going to key-in on the left wrist. This is something I think a lot of people struggle with.

But before we get into that we need to talk about the overall idea of why lag is very difficult for some players, or a lot of players, and then why we want to be able to create these big angles so that we can release those angles later in the swing.

What I want you to do is to really focus like when you get it to the bottom of the swing, I want you to feel like you turn your hand back up and really get it a lot of speed.

So it’s very slow throughout the swing, and then right at the bottom, I want you to whip that on through there.

If we do that, if you go ahead and do a few of those for me, I’ll just do swings like this. I’m feeling the speed right at the bottom and the rest of the swing is nice and slow.

I’m keeping some momentum going with it, but at the bottom that’s when I’m really getting that to whip on through there.

I can’t apply even pressure throughout the entire thing, I really have to have one part of the swing where it goes with more speed.

Because what happens is, the club actually accelerates so fast that my hand can’t keep up with it, and then I have to catch up with it, and then go ahead and let it whip on through there again. That’s a great way to feel swing speed in the swing, is just by swinging that around.

If you could imagine I had a golf ball, let’s say with a rope tied to it, and I’m swinging this golf ball around a rope, it’s at the bottom of the swing that I want to feel like that really takes off and accelerates.

Everywhere else in the swing, I’m pretty smooth except right there at the bottom. That’s what all great players are doing, and that’s why we have a lot of lag.

We have lag built up in the swing to create a big angle between our forearm and our club so that when we do let that whip on through there, it covers a lot of distance.

My hand only moves from let’s say you’re about right here in the downswing, this club’s still lagging behind quite a bit.

As my hand moves six or eight inches, my club moves four or five feet, and that creates a lot of that whipping action, a lot of that speed or snap, however we want to phrase it.

Every single good player is doing that to varying degrees in their downswing, but every single one of them is doing that same thing. The club is always taking off like crazy right as it’s moving into the golf ball.

If we have that in mind that all this other part of the swing is nice and smooth and fluid, and we’re waiting for the downswing, then we can get a lot of speed there.

If I feel like from the top, let’s imagine I was doing that same golf club spin, but I’m spinning it back here. I’m trying to put all the force in way back here somewhere, that’s going to look totally different.

As it comes down to impact, I would have no way of controlling it. I’ve got to get that snap happening right at the bottom of the swing.

Now let’s talk about what the left wrist is doing throughout the swing to make this happen. I want you guys to grab a club, choke up on it about four or five inches and work along with these.

Don’t just sit there and watch the video, grab a club and go through it with me. As I do my takeaway, I want this wrist to set very little. You can imagine it kind of hinging down like this.

That’s the sensation I’m going to have, very little wrist set. As I change directions, we’re just going to make some half swings. That club’s going to begin to set, and it’s really not until my downswing that the club fully sets.

As I come through impact, now what’s happening is as I’m moving through impact, that’s that snapping action. I want to feel like my left wrist is bowed as I’m doing that to get the club delofted.

You notice how now I’m getting some forward shaft lean in there, I’m taking loft off the club, and that’s really getting it to whip on through.

Then as I follow through, all I’m going to do is go ahead and finish my swing all the way around. So go ahead and do these drills, very little wrist set, increasing it’s not until the downswing that I max it out.

As I come on through, that’s going to feel bowed so I’m taking loft off the face, and then I’m just going to swing on through to a nice, full finish.

So do about 5 or 10 of those for me, just left arm only, and as you do this, you’re going to feel like I can get that little snap happening at the bottom of the swing even with just my left arm.

I can get a decent amount of speed. This is why when I warm up every time when I’m hitting golf balls, I actually just swing left arm only and I’ll hit about 10 or 15 shots just the left arm only.

That probably went about a hundred yards with the 7 iron, because I’m getting that speed as I’m coming down through there.

Let’s go ahead and look at one of those in slow motion, just with the left arm, and we’ll see how it snaps through there.

Then when we get comfortable with that, we’re going to add both hands on there, waiting for the bottom of the swing, and then we’re going to let it snap.

All right guys, best of luck. Work hard on that lag. 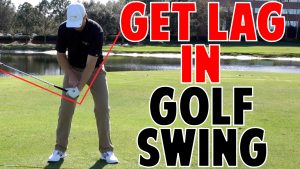