Why You Need This: How would you like to know how to fade and draw for power?

A lot of this comes down to simple physics, which I will explain in this video.

Most players who hit a weak fade come over the swing plane and chop down on the golf ball. This results in a weak shot that floats up and to the right and costs you tons of yards!

It may surprise you to find out that the proper way to hit a fade is actually to come in under the swing plane.

As you come through the ball you will still want to release the shaft forward, but you will hold the face slightly open. The result is a hard hit "Power Fade" that will get you tons of distance.

What about the draw? Does it get more roll and distance like you've heard?

It all depends on how you hit the draw.

In general, I do think a draw is a better shot for most amateur players, since it's easier to de-loft the club and compress the golf ball.

So whether you prefer a fade or a draw, you can find out how to get the most from your drives with this video!

When we watch some of the top players in the world like Bubba Watson, or JB Holmes hit 300-yard plus fades, we have to think which is better?

OK, so before the test, let me go over a couple things for those of you out there who are slicing, what you should really be focusing on, what you’re going to do to hit a good slice. Then I’ll go ahead and try to demonstrate that the best that I can.

I naturally play a draw, I think it’s a little bit easier to hit for most players, but you can hit a very powerful, very solid fade.

The first thing we’re going to do is talk about swing plane, so if I’m setting up to this golf ball here, if you imagine a line from the hosel of my golf club up through my elbow, that’s going to be about the swing plane that your club should be delivered on as we’re coming through contact.

What happens when we play a fade is many times if we do this the incorrect way, we’re falling back on our right leg and we’re coming over top of this swing plane and swinging right to left across the ball.

So if our club head ever gets outside that swing plane, it’s actually going to slow down and open up the face as it’s released. Let me explain what I mean by that.

If I have the club head here, and I lay this on the ground, if my club head is inside of this, so let’s say it’s inside the swing plane as I’m swinging down. If my hands pull the club forward toward the target, you’re going to notice how the head actually kicks out this way to line up with the handle.

So what happens when I put that in a real golf swing, it sounds really complicated, but it actually would be really easy, if my club head gets inside my hands as I pull through, or as my hands accelerate through contact, it’s going to kick this club out to the right and allow it to accelerate and the face is going to turn on over to release a little bit easier.

That’s why you always see people who are playing a draw, the club head gets a little bit inside the hands and then kicks out and releases. That’s maybe only an inch or two inches would be idea.

Now if we’re playing a fade, and we do it the wrong way, we get this club head outside of our hands, as if my hands move forward, this head wants to pull back in, open up, and there’s tons of force, we’re talking probably 100 pounds of force or more opening this space and having it slow down.

So since the head is kicking in, it’s actually slowing the golf club down as it’s moving through contact, that’s why people lose a lot of distance with the fade.

So we want to, ideally, if you watch those really long hitters, the Bubba Watsons, the JB Holmes, that are crushing the fade, you’ll notice that their club head is on this plane that’s going to be slightly inside of that plane as they’re coming down, and then they’re going to have the face open but that club is still kicking out through the ball.

So even though the face is moving slightly to the left as you’re coming through contact to get the fade, they’re still maximizing the release of the club.

The second piece here, if we look in this direction, is going to be the angle of lag. So as we’re coming down I want to make sure even if I’m going to play a fade, a lot of times what people will do when they struggle is they’ll fall back and flip with their hands, you can see my left wrist is cupping up.

So the shaft itself is still kicking to release, I’m just going to have the face a little bit more open. Keep those things in mind as you’re hitting your power fade.

Now let’s go ahead and try a couple out. I’m going to make a few swings, I’ll show you one of my better fades and one of my better draws, and let’s see what the difference is for me, a person who naturally hits a draw.

All right, so we tried them out, both balls were pretty straight, one of them just had a little bit of a fade on it, other one just turned over right to left a hair, so I’m coming through pretty square on both of these, and that’s what you’re going to want to do for all solid shots.

So even though one turned over a little bit right to left, one was a little bit left to right, we’re getting pretty similar results.

So if you know how to hit the fade correctly, you can get about the same results with the draw.

Good luck to you guys. If you’re going to play that fade, remember two things. Number one, I’ve got to come in from the inside, let that club work to the inside, and then it’s going to be working back to the inside as we’re coming through. 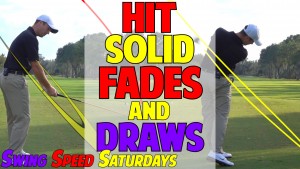