Why You Need This: In this video, you'll learn how to chip from the collar in golf.

Hitting from the collar can cause all sorts of frustration.

It's sort of a cruel joke to see your ball with a big clump of grass just behind it.

So what do you do?

Break out your iron?

Or maybe you think your putter or hybrid will do better?

Kick it while your buddies aren't looking? ;)

In the video, you'll get some great tips to hit from the collar using 3 different clubs.

Putter from the collar

The putter is typically the easiest to hit except when the grass is higher than the face (like from the collar).

In this situation, the grass will get stuck between the face and the ball and will cause an inconsistent roll.

However, stick with the putter if the grass is around half the height of the putter face or lower.

In that case, you can hit a good, albeit thin, putt to the pin.

9 iron from the collar

When the grass is too high for your putter, break out your 9 iron.

Get a little closer to the ball and stand the club up a bit.

The heel of the club will rise and will help allow the club to travel through the grass with less resistance.

With a little forward shaft lean, use a stroke that's similar to a putting stroke.

Hybrid from the collar

Using your hybrid can be a great option.

However, I find that the ball tends to come out too hot and is difficult to control.

With the hybrid, use the same stroke that was previously described with the 9 iron.

Here's the order of how I like to play from the collar...

Note that personal preference does come into play with this analysis.

So make sure you go out and test the ideas for yourself.

Watch this video now to discover how to chip from the collar in golf...

And get some great tips for your stroke so you can hit consistent chips!

All right guys, we’re going to talk about one of the most frustrating shots, absolutely aggravating shots. Your ball lands on the green, rolls off the green, and settles right against the collar of the rough.

Now there’s this big clump of grass right behind my golf ball, I don’t know how it’s going to come out. I hit it hard and it shoots across the green at a thousand miles an hour. I try to take it easy and I chunk behind the ball, and it’s just so frustrating.

I’m going to talk about three different options that we can use to play this shot.

You’ll see here, there’s blades of grass that are completely over top of the ball. Now what that means is, I can’t hit a thin putt, or I can’t hit a putt off the bottom of this putter blade without getting grass stuck between my club and the ball.

I’ll know for sure if I have this particular lie, if I try to hit that, that ball is going to get grass smashed between the club and the ball, and it’s going to be very inconsistent.

I’m going to get one that I’ll hit, and it will come out two feet. Then I’ll try to swing a little faster on the next one, and it shoots off across the green at a thousand miles an hour.

Typically, I do like putter. I think that’s the easiest play, but I want to make sure that it’s more of this kind of a lie. Now you can see the top of the grass isn’t all the way over top of the ball. Now I can come in, I can hit a little bit of a thinner putt, and it’s going to come out all right.

Those are pretty easy to handle. I’d use a putter with those, or we could use the next option which I’m going to go over which is a 9 iron.

So here I’ve got back to where now the grass is completely over top of the ball again. We don’t want to use the putter, just a little too risky. Now I want to use a 9 iron.

I’m going to set up a little closer to the ball, and now my hands are going to be almost like a putting stroke.

What that’s going to do there, is instead of having this entire leading edge, this entire sole coming down and catching the grass, now we just have the toe in this nice U shape on the bottom. It’s going to glide through that grass a little bit easier and not get caught up as much.

I’m going to go ahead and make a little bit of a forward shaft lean, that’s going to be very similar to a nice putting stroke. Now chipped that one up there, almost about 6 inches from the hole. It came out very nicely and rolled out.

You can see that even though it hit the face, it’s going toward more of the bottom of the face, and that’s allowing it to slide through the turf a little bit. If I tried to hit it up there, that’s just too much grass between my club and the ball.

Now the final option, for those of you who may not like either of those, is the hybrid. My personal opinion, I think it always comes out pretty good with the hybrid, but sometimes it comes out a little too good.

It comes out a little too hot for my own personal opinion. I like to use the putter when I can. I use a 9 iron when I can’t do that, and I use a hybrid, some people really prefer this, I’m going to use the same technique I did with my 9 iron.

But I do think this is a very effective way to make sure that you get it out of there every time. Because it usually comes out too hot, it’s always going to get out of there.

You very rarely chunk one with a hybrid because the sole is so thick that it doesn’t tend to grab the grass and dig down in there and chunk.

Now the one club I don’t recommend, is using a lob wedge. I see players try to do this a lot. They’ll use a lob wedge, they’ll put it back in their stance.

Let’s imagine I’ve got a lot of loft on this club, this is my 9 iron, but let’s pretend this is a lob wedge. I’ve got this very sharp edge, and I’m trying to kind of pop down on that ball.

Well that’s very easy for me to hit, chunk, and my club never makes it to the ball at all, and I wouldn’t recommend that. We want to have these nice, smooth, kind of level strokes and we’re using clubs that are going to glide through the grass rather than get caught up in the grass.

So I’d recommend don’t use the lob wedge, it’s just too inconsistent, too many variables coming in there.

Lastly here, I recommend you test it. Don’t take my word for it, don’t take anybody’s word for it. Go ahead and grab 10 golf balls, lay them down. Hit 10 putts.

Measure them, see how many tap ins you have, how many you have that would be a little iffy. Then finally do it with a hybrid, and test those out.

That way you can see not only your preference, but you’re going to have scientific evidence that backs up this is going to be the easiest one to get up and down. 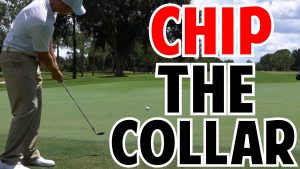