Why You Need This: Determining exactly how tight to hold the golf club can be really challenging and confusing for many players.

Should you hold on super tight to make sure you don't throw the club...

Or should you use light grip pressure to ensure that the club can whip through contact?

And should your grip pressure be the same with both hands?

These are the questions I explore in this video.

You'll learn, in crazy detail, everything you need to know about grip pressure throughout the swing.

Watch this video now to learn in-depth information about your golf grip pressure!

All right guys, welcome back. Hit a nice shot there, almost right at the flag. Came down just to the left of it. We’re going to talk about swing speed and grip pressure in this video.

On that particular shot which was almost dead straight, 7 iron, or excuse me an 8 iron, no it’s a 7 iron, I just have them marked wrong on here. We got 100 miles an hour of club head speed, so 100.9 miles and hour club head speed.

How is it possible, if we’re thinking about grip pressure, how is it possible to generate that much club head speed and not feel like we’re really tight? Shouldn’t the club just fly right out of my hands if I’m putting 100 miles an hour of swing speed in there?

Let’s go back over this again, and I’m going to go into really good detail throughout the entire swing when this should be happening, what you’re going to feel with your grip pressure throughout from start to finish.

At the start, what I like to recommend is keep really light grip pressure. I want to have my hands on the club as lightly as possible. The reason for this is, I want to be able to feel this club face.

That’s going to be very, very important on how accurate I can be. I want to have this nice and soft to where I can feel the face.

If I take a really strong grip, I’m squeezing the life out of the club, I really want to guide this thing and get it to where I want to go.

I can’t really feel the face as well. Same thing as if I’m warming up and I grab let’s say two or three clubs. This is really, really heavy, and I’m doing these practice swings like this.

When I go back to one club again, I’m going to have a tough time having the feel for the club head. It’s going to feel like it’s so light that I can’t really tell if I’m open or closed.

If you do swing two or three clubs to get warmed up, make sure you make a few swings just with the grip into the club, and make sure that’s going to go so light on this end that now when you flip I back over, you can really feel this club head.

Now as soon as I start to move this club from a science standpoint, I am putting more pressure into this grip. The only thing that makes this club head move at all, is the pressure that I’m putting in at the handle.

Then I’m going to put even more pressure as I’m starting down. If I want to get very specific with this, what’s happening is the right arm as I starting down, is beginning to throw this club.

So it’s beginning to put some pressure at first this way, and then down the circle, and then it’s coming through, it’s almost like I’m taking a rock, or a pebble and kind of skipping a stone. I’m letting it go with that right hand.

As I come through impact, my right hand is going to let go. You’ll see players like Fred Couples, you’ll see Phil Mickelson, some of these guys will actually let go of the club with the right hand. Vijay Singh comes to mind too.

So when we’re talking about right-hand grip pressure. Starting very light at 2 or 3, it’s going up to maybe a 3 or 4 at the top. As I start down, it’s going to gradually start to spike out to 5, 6, 7.

As I’m really releasing that and letting it go right around here, I’m almost up to an 8 or a 9 grip pressure with my right hand. Then right at impact it’s all going down to zero.

As I finish all the way at the finish of my swing, it’s back to a one or two again. If we’re just talking right hand, we’re starting at a two, we’re gradually increasing throughout the swing.

It’s going to max out right around here about an 8 or a 9, and then it’s going down very, very light again.

The entire downswing is a quarter of a second. You’re only at that really high grip pressure for probably a 30th of a second, if I just had to put a random number on it, just a guess. I haven’t measured that, so that’s just a ball park of what we’re talking about.

Now the left hand’s going to do the same thing, it starts out very light again. It gradually increases pressure. As it starts down, it’s not going to get tight quite as quickly. It’s kind of along for the ride.

When it realy starts to lay on the pressure is the last part of the downswing. It’s higher on the club shaft which means it’s got a bigger arm, or a bigger lever, it’s got a longer amount of club to work with.

We can really use this to use acceleration late in the swing. What more specifically is going to happen is as I’m coming into the downswing, I’ve got a lot of lag. I’m going to push down and out with my left foot into the ground.

So I’m turning that grip back up and out, to get it to whip on through there. My left hand is really spiking very hard as it’s coming through impact.

Then as we get to the straight-line release, that’s when all that energy’s gone, it’s going to go light again.

If I’m talking left hand specifically, as I set up at address, again, I’m a 1 or a 2. Gradually, gradually increasing. As I’m about half way down, I’m probably. If I had to put a number on it, I’d say maybe a 5.

That’s going to max out there at the straight-line release, or just in front of impact. Then I’m going up very, very light again. I’m a 10 here, and then I’m all the way back up to a 2.

If we look at this happening all together, I don’t mean to be overly complicated here, I just want to answer a lot of questions as we’re going through this.

If we looked at this all together, there’s a great way to simplify this which is just simply to say I want to keep my hands as light as I can on the club so I can feel the face while still being able to have control and get a lot of speed.

So if I want to have this 100 miles an hour of club head speed with a 7 iron, which would be fairly fast. Then I’ve got to apply a certain amount of pressure down here at contact getting that club to turn back up. But before that and after that, I want to be really nice and loose.

So it’s just a split, the sensation is that I’m just letting that club go right at impact, and I’m loose the rest of the time.

Let’s try that out again. You’ll see how I’m not really getting tight. I’m letting that club kind of whip through contact.

Most of the time it’s nice and smooth, and then I’m just getting that snap of speed at the bottom of the swing as I’m turning back up that grip.

There we go, another great one. That one was just barely to the left of the flag. Maybe six, seven feet. I killed that one, hit it a little too far, even. We’ll see what the club head speed is there. So that one 97.8, but not too bad. 178 yards with a 7 iron, so I’ll take that all day.

Best of luck to you guys, hope that answers a lot of your questions on grip pressure. I’ll see you all soon. 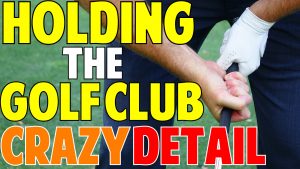