Why You Need This: In this video, you'll learn how to hit penetrating iron shots.

How many times have you hit a super high shot, and it just seems to float around then falls straight down?

It's almost like your 6 iron had the ball flight of a pitching wedge!

Today you'll learn how to keep your iron shots low...

Because the LAST thing you want to do is hit a high, blooping ball into the wind and lose tons of distance.

To hit your shots low, here's what you need to do...

First, play the ball slightly back in your stance.

That'll allow you to hit a little more down on the ball.

About half way into your downswing, allow your left wrist to bow down.

This will help close your clubface.

Now, concentrate on coming into contact with tons of forward shaft lean.

As you'll see in the video, the club face is delofted, which will keep the ball trajectory low.

Through impact, feel like you're trying to put topspin on the ball.

Put all these tips into your swing and you'll start to hit with a lower trajectory.

Hi guys, welcome back. How many times do you hit a shot and it just kind of floats straight up in the air?

Where it’s an iron shot, maybe you’re hitting in to the wind, the wind’s really coming back into your face, you hit that shot that goes really high, it gets caught up in the wind and it just falls straight down, doesn’t get a lot of distance.

Well that’s a very tough shot when you’re playing into the wind. If you hit the ball high, we need to know how to hit those low, penetrating iron shots.

Now if you’re downwind, hitting it high can be an advantage. We’re going to talk about your normal shot shape, if it’s a little bit higher, that’s completely fine. Play it high in the wind, let it ride on out.

I’m going to give you an example of that today. I’ve got a little wind behind me. If your normal shot is high, that’s fantastic.

But then we’re going to talk about when you get in to the wind, when you’re feeling uncomfortable, when you’re afraid you’re going to hit that shot too high, how to get that penetrating shot that’s just going to bore right through the wind, and get your normal distance.

Let’s go ahead and start out first, I have my FlightScope radar behind me here, and I’m going to just hit a normal, kind of fairly high shot.

Let’s pretend that you’re a fairly high ball flight player, and let’s just go ahead and hit a 6 iron right down the middle of the fairway and see what happens.

There we go, so that ball is pretty high. Like I said today, I’ve got some wind behind me so that thing’s going to carry pretty far. I mean I’m going to get a little extra distance if I’m playing it nice and high.

It is an advantage if you have a naturally high ball flight just to go ahead and let that thing ride the wind and crush it when you’re down wind.

Now if I want to hit a low, penetrating shot. So for you guys that already hit it high, you’ve got that shot all day, that’s an easy one.

But if I want to hit a low, penetrating shot I need to make a couple of changes to make sure this goes nice and low.

Number one, I’m going to play the ball slightly back in my stance. So normally I would play the ball kind of off my left ear, the inside of my logo on my shirt, somewhere around in there would be fine, just wherever you normally like to play it.

I’m going to play that ball back about one ball width. Just about an inch back. That’s going to allow me to hit down on the ball a little bit more.

Number two, I need to deloft this club. This is really, really important. So what I’m going to work on here, is I’m going to go ahead and as I’m halfway down, instead of this face being kind of almost straight up and down.

So we’re imagining I’m hitting a ball here, my club face is going to be pointing directly down to the ground. What I’ve done is I’ve closed the face, and from there, I’m really going to work on getting tons and tons of forward shaft lean.

As I’m looking down at this club face, there’s almost no loft on it at all. That’s a bit of an exaggeration, but that’s what I’m going to feel like.

I’m going to show you from face on here, there’s my wrist, this is bowing. This is cupping, and this is what we go over in The Move section. I’ve got a five-video series that goes over exactly what you need to do to get that compression, get that forward shaft lean.

I’m going to feel like that face is down, and then as I’m at contact, now I’ve taken all the loft off. Look at all that forward shaft lean. I’m really going to be able to hit a low, rocket, penetrating shot.

I also want to feel like the back of my left hand is almost coming up like it’s putting top spin. The way that I like to visualize it, we don’t want to get this ball with a lot of backspin that shoots up into the wind.

I want to feel like I’m taking the back of my left hand and rolling the ball to get some top spin as I’m coming through the shot.

So if I’m flipping the club, if you watch my left hand, it would be releasing that way. I want to keep it bowed and feel like I’m letting it put some top spin on the ball. That’s the visualization.

I almost want to feel like that ball is coming off the face, and it’s going to knuckle ball, or have top spin on it, even though there’s no way for it to really get top spin.

But it’s got this yellow golf ball attached to the top of it. What this is going to do, is if I get my hands in the correct position, and I get this wrist bowing, I get my right wrist cupping, and my hands are way leaning forward.

Well then as I come through that shot, now it’s going to give me that forward shaft lean and this golf ball should hit on the bottom of my right forearm.

That’s going to allow me to come through with some forward shaft lean, that’s going to be nice and flexed or bowed and getting that top spin, or what feels like top spin on there.

So that’s going to take all the loft off the face. I’ve got the ball back in my stance, I feel like I’m putting top spin on it, which is the sensation I’m getting. Let’s try those swing keys out.

Ball back, I’m really going to feel like my club is turned down here. Then I feel like I’m just coming in, taking all the loft off the face, a little bit of top spin on there is the sensation I’m going to get. Let’s see how low and penetrating this shot goes.

There we go. Super low shot, much more penetrating. We’ll take a look at the numbers.

All right, so now I’ve got my FlightScope X2 Elite out, what the radar is telling me on the first swing just to recap, 94.5 miles an hour club head speed.

187 yards of carry distance, so again, that one I’m a little downwind, that one got up in the air and really rode the wind, carried a long way. The total height was 102 feet, and the launch angle was I believe 17, yeah, 17 launch angle.

Now if I go to the second one, this is the one I really bowed it down, feel like I turned the club face down, got tons of forward shaft lean. Worked one exactly like I did with the Impact Snap.

On that one, club head speed a little bit slow, I probably felt like I was trying to knock it down a little bit more so I didn’t release it as aggressively. The carry distance was pretty close to being the same, 181.8, so 182 yards.

Another thing there was the spin, so depending on how much spin you get is going to determine if that ball penetrates through the wind or not.

So work on those keys, get the ball a little bit back in your stance. Work on getting that club face pointing down to the ground, I’m going to really bow and cup my wrists.

So this is facing down, and that’s going to allow me that I’m going to keep that face square as I’m coming through contact.

I’ll have a promo code CBALLARD, if you put that in, if you order your Impact Snap they give you a few dollars, 10 percent off. It is a cool training aid, especially for those of you who struggle flipping the club.

Work on those drills, you’re going to hit those low penetrating shots. 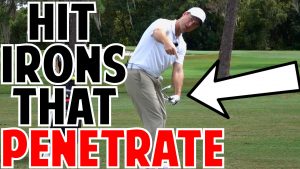