Why You Need This: In this video, you’ll discover how to hit a high bunker shot that stops.

It’s easy to blast your bunker shots way over the green so this is a great video to get your shots to land and check up on the greens.

There are four steps to hitting shots that launch high and land soft.

First, make sure your club is open enough.

With your wedge, open up the club face about 45 to 50 degrees.

The second step is to have the ball up in your stance to avoid coming down too steep.

The third step is to open up your stance a bit and release the club earlier than you normally would.

Last, well, you'll have to watch the video for that ;-)

Remember, your club face is open and you want the ball to explode up.

Watch this video now to whip your club through the sand...

And launch the ball high and land soft near the pin!

Hi guys and welcome back. In this video we’re going to talk about how to get those really high bunker shots that are going to come out and check up, land on the green, and stay soft by the flag.

So we’re going to go through four steps to this, it’s a pretty easy shot once you get used to it, because of the sand we have a good margin for error. One of the first and most important thing I see time and time again is that people aren’t opening the face enough.

So I want to go ahead, if I’m setting up with the leading edge of my club, I’d recommend a 60° wedge. You can probably use a 56° wedge also, but I want to make sure that I’ve got a lot of loft on this club.

As I’m setting up with the leading edge straight up and down, I’m going to go ahead and twist that until it’s about 40° or 50° open in my hands. Now as I set down to the bunker, now we can see that is really, really open.

So the face of this club is going to feel like it’s pointing straight up to the sky. Also, that’s the first key. We’ve got to get that face really open.

Number two, I’m going to go ahead and I’m going to line up with this ball a little bit up in my stance. I find putting my ball back in my stance, the tendency is going to be to get steep and then I’m digging down into the stand.

Basically what I want to do, is I want to put it up in my stance, I’m going to go ahead and smack underneath the ball. I’m letting this club go, and I’m hitting behind the ball a little bit, and really just exploding this shot up.

Not only that, I want to go ahead and open up my stance a little bit as I put it up in my stance. That’s going to be completely fine. Now also it’s a little bit different than hitting a shot out of a fairway.

I’m going to go ahead and hinge the club, and then as I’m coming through, I’m letting my wrist unhinge, almost like you’re flipping the club. This would be terrible technique for a full swing, but it’s a great technique out of the bunker.

I want you to go ahead, let your wrists kind of get relaxed, and let them flip a little bit. We’re wanting the bottom of this club to kind of scoot underneath the ball, and we’re really going to explode this shot out of there.

Now lastly, I’m going to go ahead and take a big aggressive swing. I don’t want to get kind of cute with this and take a little mini swing. If we’re going to get the good height on it, especially for these really high bunker shots that we want to hit.

Now the face is going to be pointing way out to the right, because it’s so open. I’m going to line up a little bit to the left to counter-balance from that. We don’t want °o go extreme, but a little bit’s going to be fine.

Then I’m going to take a big aggressive swing, really let this club kind of whip on through. That’s going to get me that really high shot, it’s going to come down soft, hopefully right beside the pin.

There we go, that’s going to get that ball launching high, stopping by the pin. Good luck to you guys, I’ll see you all soon. 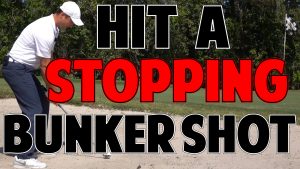