Why You Need This: In today's video, "Hips for Speed & Distance? | Why This Strategy Isn't True"...

You'll find out why the age old saying, "It's all in the hips" isn't exactly correct when it comes to the golf swing...

It actually is a blend of using your hips AND creating momentum with your body...

Watch this video now so I can help you fully understand how to swing with the correct use of your hips...

All right, so we’ve all heard that the hips are going to create massive amounts of speed in the swing. For those of you out there, let me know if this is you.

You’ve been told that I can rotate my hips through and if I want to get a lot of power all the pros really rotate their hips as fast as possible, spin open their body and their shoulders, and that’s going to get you the maximum amount of speed.

Well in reality, that’s just not true. I can actually keep my hips very, very still and I’m going to be able to hit this ball pretty fall.

So it’s a goofy looking swing, I wouldn’t recommend swinging this way, but I want to show you just how much club head speed I can create without moving the hips hardly at all.

There we go, so not the best shot. My hips probably moved a little it, but almost completely passive in the shot. Let’s go ahead and take a look at the numbers.

All right, so there we go. 113 miles an hour of club head speed, 266 total yards, not the best swing, I wouldn’t ever recommend swinging that way, but I just want to make the point if I can swing 113 miles an hour without using the hips hardly at all.

I know my hips rotated there a little bit, then why is it so popular that we have to rip open the hip, we have to swing very fast with our body to create club head speed?

That’s what we’re going to go over in today’s video. It’s actually a blend of these two things, so let me set this down for a second.

What I want to have happen, is I want to create some momentum with my body. My body isn’t designed to swing as rotate as fast as it can, but I do want to load up.

I want to make sure that I get a good turn with the hips going back about 45°, I want at least a 90° or more shoulder turn, and then as I’m coming through I want the hips to rotate all the way on through, and I want my shoulders to actually be facing into the left rough.

That’s for speed, it’s not just for speed. That’s creating a baseline moment of the body, that’s getting the body to rotate and to create a little bit of easy speed that doesn’t take a lot of effort.

Now from there what we’re going to do, is we’re going to add on to this by getting some lag with the arms, and then releasing the club just like we talk about in the straight line release to let go of all that energy.

So our body creates a low, slow, consistent speed. I like to call it momentum, and then on top of that the hands and arms go, that’s what’s going to get you that high rate of speed that really ramps your cub head speed up into the mid-teens and even faster than that.

So now let’s go ahead and let’s take a couple, let’s hit a ball. I’m going to do a normal swing, this time I will get a hip turn. We should see my club head speed jump a little bit from 113.

What I want to focus on in this swing, is I’m going to make a good, full turn going back. As I come down, I want to imagine that my wrists are actually turning back this way toward my head.

It’s going to look something like this. I go in really slow motion, go ahead and stand up out of your chair if you want to try this at home.

Very little wrist set as I’m going back, it’s going to feel like this. As I start down now I’m increasing my wrist set, this is my maximum lag position, halfway down, just like we go over in the system.

Then from there, watch my hands release this club 45° in front, so as my club’s angled 45° from my chest, that’s our straight line release, that’s when we’re getting rid of all these angles that are built up in our arms.

I’m going to go ahead and try to swing one here. I’m going to exaggerate this a little bit, little wrist set, big time lag and release, let’s see what kind of number we can get.

There we go, right down the middle. Swing speed should have been quite a bit faster on that one, 113 on the one before, and now we’re at 116.4.

So the hips, they do create some speed, the body creates momentum, your hands and arms are going to add to that.

If you want to really ramp this up, very little wrist set going back, get the wrists to cock as you’re starting down, and then boom, you let that go into that straight line release position. 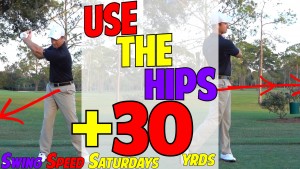