Why You Need This: In this video, you'll learn how to hit from an uphill lie.

It's a lie that can be tricky and frustrating.

It's easy to lean back and hit a moon shot that doesn't go very far.

Today, you'll get some great tips to hit nice, clean shots that land in the center of the green.

The main issue you'll need to address is that as you lean back...

...the loft of your club tilts back as well.

Another issue is that it's common for golfers to chop down into the hill.

Here's how to hit clean shots from uphill lies...

First, start with your stance.

Since it's an awkward stance, I recommend widening your stance a bit compared to your normal shots.

Also, tilt your shoulders to match the angle of the hill.

You'll likely put a bit more weight on your back foot.

So, now that your body is matching the slope of the hill...

...how do you prevent hitting the ball super high?

Since you're leaning back and adding more loft to your club...

Expect the ball to launch way higher and that you'll get less distance.

I recommend grabbing a longer club and take your normal swing.

Due to the lower loft on your club, your launch will be lower.

If you're far from the green...

Focus on laying up to avoid any bunkers or water that may be surrounding the green.

If you lay up well, you'll still have a good chance to get up and down to save par.

One extra tip (but only if the slope is slightly uphill)...

I find it easier to have the ball slightly up in your stance from your typical ball placement.

Yes, your ball will launch even higher...

But your club will be able to make cleaner contact.

However, keep your ball placement at its normal spot if the hill slope is very severe.

Summary of how to hit from an uphill lie...

Also, be prepared to fall back a bit after you hit.

Watch this video now to for the key tips for how to hit from an uphill lie!

All right you guys, so the uphill shot. The one where you’re really tilted away from your target. Very difficult, the ball’s going to shoot off super high.

I’m going to show you how to make those adjustments so you can hit this ball nice and clean, and get it right on the middle of the green or back out into the middle of the fairway. Let’s go ahead and get started.

So that’s the main thing we’re trying to combat here, and then number two, we’re leaning away from the target. If we make our normal swing we’re almost chopping down into the ground, into the side of the hill, and that can make it difficult to get clean contact.

Number one, the ball’s going to launch higher. Number two, we’re going to be chopping down into the hill, and we need to do some things to combat these.

Let’s start out with our stance. We’ll start from the ground up here. Now since we’re on a little bit of hill, we’re off balance, I always like to take a little bit of a wider stance if I can. We don’t have to get crazy with this, but just get wide enough to where you feel like you can stay in some balance.

So now that I’m in this position, my club can ride up the hill, where as a lot of times I see people try to fight this hill. They’ll lean to the left to try to balance out their weight.

Now you can imagine that arc is coming down into the hill, and I’m going to be chopping down into it. I have to hit the ball perfect to be able to do that and get away with that kind of a swing.

Now since I’m leaning back, I’m adding more loft, this ball’s going to fly a lot higher which is going to make it go a little bit shorter. What I recommend to do is take at least one more club. If I’m on a really severe slope, I may take two or even three extra clubs to be able to make sure that I get to the green.

It’s going to be better to get it back out in play, advance it, try to get up and down to save a par than it is going to be to try to whack away at this ball that’s very difficult to hit anyways.

We get into some trouble, especially if we start hitting it high up in the air, it could go into the water, into the trees, and now we’re going to make a double or triple bogey. Take a little bit of your medicine, if you’re close to the green one extra club, maybe two extra clubs, get it on the middle of the green.

Don’t try to go for the pin, because we’re not going to have the control of the ball flight like we normally would because things are so different.

Now lastly here, if it’s not too far of an uphill slope, I’m taking an extra club which will give me a little bit more distance. Because I’m naturally going to be swinging up this hill, I think it’s a little easier if you play the ball slightly forward in your stance.

Now that will get the ball to go a little higher, but I think that’ll also get your swing moving more up. So this is a little bit more of an advanced-type technique.

If you can be sure that you’re going to get to the green playing a little bit more up will get the ball to go higher, but you’re going to be taking an extra club to combat that. You don’t have to do hat one, that’s if we’re really trying to get clean with it, the slope isn’t too severe.

Once it starts to get pretty severe, we want to play it in the normal spot in our stance because it’s just going to go too high for my normal lie.

So wider stance, weight on our back foot. We’re matching the angle of the slope. I have an extra club, and then finally as I finish my swing, realize that my back foot is almost going to do a little rotate, a pivot.

So as I come on through, my toe is going to turn toward the target and then I’m going to have my weight falling back on this right foot, especially on a severe slope, there’s just no way to keep your balance and stay with a normal swing.

I’m going to look something like this, then my weight’s going to fall back. You’ll see players do this all the time on the PGA Tour when they’re hitting some slopes, you just may not have realized that’s what was going on. Let’s put all this together, get it back out in the middle of the fairway.

All right guys, play well. Get off the uphill lies, you’re going to do fine with them once you get some practice with this. Drop over a big bucket of balls, go through these drills. It’s going to be easy. 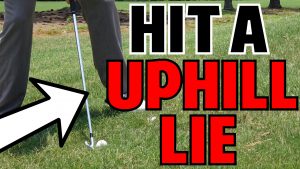