This is especially important for those of you who are trying to achieve more club head speed, more ball flight, and distance...

See how building golf swing lag and letting it release through and after contact will significantly increase your speed...

The resistance built up with the angles you create on the downswing allow for a whipping action which can generate upwards of +10 MPH...

Watch my "Golf Swing Lag Wrist Power Adds 30 Yards" video now to see us explore lag while understanding what happens when you cast or burn up the lag vs. holding on and releasing it in the correct moment...

We’ve all heard about how we have to create a massive amount of lag starting down, and then release that lag to create club head speed.

Today I’m going to give you some great tips on that, and I’m going to measure using my flight scope to see how important lag really is. I think you’ll be shocked when you find the results.

All right, so now I’ll put it to the test. I’m going to try to cast, I’m going to do my best to really cast this club early, and what I mean by casting is as we’re starting down, instead of creating a lag and maintaining an angle and actually increasing angle between our forearms and the club, I’m going to burn up that angle.

What that does, is this starts to use up my swing speed in the downswing early, so my club will actually be moving too fast here, and I won’t have anything left by the time I get to the ball.

So I’m going to go ahead and make a few swings here, let’s see what the numbers read, we’re going to look up at my club head speed and overall distance, and see how this affects it.

I actually hit that really solid, I don’t know how, I just kind of timed it up. Big time flip, that ball looked really, really high, probably had a lot of spin on it.

Not too bad, I got 278 and that was absolutely just as pure as I could hit it, but my swing speed was only 102, which is really slow for me. So let me go ahead and swing a few more.

I’m swinging so hard, I’m putting out a lot of effort, but I feel like there’s just nothing there when I get down to impact. I’m actually hitting those pretty solid, so this should be a really good test, a really good reading, because I’m getting everything out of what I’m swinging.

Actually hit a tree right here in front of me, I hit that one so bad, that was way left. I don’t have a lot of control of the face either, because whenever I cast on my downswing, I’m burning it up.

Now it’s kind of even with my hands, and the face gets really unstable, so I can’t exactly feel where the club face is. When my hands are in front, now it’s leading the way, and my face is going to be much more stable through contact.

So not only is it going to give you more speed, you actually get a lot more consistency too. So that one was 101 miles an hour club head speed, again that one hit a tree, so it went 180 it said, it didn’t go 180 because it hit the tree and fell down right here.

So we know it probably kind of manufactured some of those numbers once it lost it, it actually looks like it did go a couple, about a hundred yards and then it lost the ball, and just kind of went off the launch angle that it went there.

Now let’s go ahead and reset the flight scope, and make some real swings, some normal swings, I’ll try to get back into a good swing, and let’s see what it does to our club head speed.

Today’s tip we’re really going to work on what I call getting the shaft stacks as your hands are about waist high.

Now in the downswing, what we want to do is as we’re going back we’re not going to fully set our wrist, and as we’re starting down increasing our amount of lag, and about halfway down we’re fully set with the wrist.

Now from there, I’m going to go to my straight line release like we talked about in the system, and I’m going to get rid of all those angles.

So you can see the angles in my wrist here, I’m going to let those release out in front and what that’s going to do is allow my club head to accelerate as I’m coming through the shot. You should see at least about a 10 mile an hour jump in club head speed.

For you guys that are practicing at home, I want you to work on two things. Number one as you’re starting down, I want you to pause when your hands are about waist high, and I want this club to be vertical if you’re looking face on like this.

That means you’re retaining lag pretty well into the downswing. Now from there we’ve got to let it go, that’s what gets us speed.

We get the lag and then we’ve got to let it release into my straight line release point which is 45° after. So my chest, my hips, everything, my club, my arms, they’re all releasing about 45° after the shot, and that’s allowing that club head to accelerate as I’m coming through the shot.

So now let’s go ahead and try a few out we’ll see what it does to my distance, hopefully you’ll see a noticeable improvement.

Let’s try another one out. That again wasn’t my most solid, didn’t catch it dead center, let’s see what the club head speed is, yeah, 113 again, we’re at 297 so almost 300 yards there.

So picking up almost 30-40 yards of distance, picking up 10+ miles an hour of club head speed, and that’s the difference between casting early and really retaining that angle and then letting it go.

So if I’d hit those dead solid, I actually hit the ones that I cast, I just happened to time up a couple of those better. If I hit these a little bit more solid, I’d probably pick up another 10 yards, and I’d be around that 310-315 range which would be a really nice, solid stroke drive for me.

Work hard guys, work on your lag, and I’ll see you all soon. 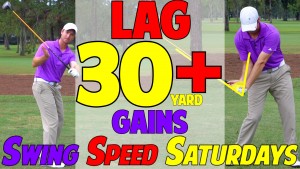