Why You Need This: In this video, you'll learn great golf swing footwork.

We've all been taught to have consistent footwork...

I'm sure you've heard tips such as you need to keep your feet square and don't ever lift your left foot off the ground.

But have you been told the wrong information?

Yes... For the most part, those tips are wrong.

When you take a close look at some of the best golfers in the world, their footwork isn't nearly as stable as you'd think.

It's OK to lift your left foot off the ground a little.

And current players such as Bubba Watson do it also.

Lifting your left heel up will help you rotate your hips for a bigger turn in your backswing.

So if you're struggling with power and clubhead speed, then let your left heel lift up a bit.

Just keep in mind that there may be a slight trade off.

If you're swinging with tons of power and you'd like to be more consistent, then reduce the movement in your feet.

The point is that lifting up your left foot a bit isn't taboo.

In this video, you'll discover the truth about your footwork...

And you'll learn a few more sneaky tips to help you get more power and distance!

All right, so we’ve all been taught to have very consistent footwork. We’ve seen how when we set up we want our feet nice and square.

As we go to the top of the backswing we don’t want our feet lifting up off the ground. That’s been the common practice, common teaching for the last 30 years or so.

We don’t want to have a lot of leg movement. As we’re coming through, we want to keep the lead foot nice and stable, and pivot around that lead foot. It should look something a lot like this.

That’s not really what I see in the best golfers, and I’ve studied thousands of hours of footage from all the top golfers. When you really look at the best golfers in the world, their footwork is moving a little bit different.

Now in the backswing, I’m fine if someone wants to lift up their left heel just very slightly. So if we’re looking from this way, this is my left heel. I’m hitting a ball toward the camera.

As I go to the top of the swing, I’m fine if somebody wants to barely lift up that left heel a little bit off the ground.

What that’s going to allow you to do is to rotate your hips and shoulders a little bit more, and as you transfer down, putting a little pressure back into that left heel allows your body to move up and back which allows you to release the club a lot harder down and through.

So that’s Newton’s law of every action there’s an equal and opposite reaction. As I drive into the ground that moves this side of my body up, that’s going to allow me to release the club down and through with a lot more force.

That’s why you’ll see some of the old-time players like Jack Nicklaus got the left heel lifted up, and then bam, really drove down into the ground. You’ll see that with current-day players that are very good like Bubba Watson.

Either way, if you keep the left heel down in the backswing, completely fine with that. I think you can still load up the hips and shoulders, you’re just going to get a little boost if you lift the left heel up.

So my rule of thumb would be if you’re really struggling with power, and you feel like you’re having a hard time creating club head speed, you may lift that left heel very slightly and then feel like you’re pressing it into the ground as you’re coming through contact into the release.

If you’re fine with power, if you’re a pretty powerful guy already and you want to make it as consistent as possible, you can go ahead and leave the left heel down the entire way.

The biggest misconception out there though, is what’s happening to the left foot as we’re coming through.

When you watch the top players, and I’ll show you in a second here some of the top players. I’ll have them running up here in the screen as we’re talking.

As they’re coming through contact, you’re going to see with all the top players, because my hips and my shoulders are rotating through to a good, full finish. If you look at my shoulders they’re pointing over this direction.

If you look at my hips, they’re directly toward the target. That’s what you’re going to see with the top players. I order to do that, I’m going to drive into my left ankle and as I come through the shot, my left foot is going to spin open very, very slightly.

So as I’m coming through, let me go ahead and make a full swing, and watch my left foot as I’m doing this.

See how my left foot started to rotate open, it almost came up a little bit. Well, that could be dangerous on the ankle. If you watch Jordan Spieth, sometimes he rolls it completely off the ankle like that, and that’s a little tough on the ankle.

What I recommend, is go ahead and open that left heel up a little bit, especially for you older players out there. You guys that are 60-plus, and getting a little tighter in the hips. Everybody naturally does that.

Go ahead and open up the left toe 20 or 30°, that opens up your hip socket, puts your knee in a position where it’s a little farther forward. Now as you come through what you’re going to notice is, it’s easier for me to rotate all the way on around.

So as I came through the shot, I rotated a little extra there, almost lost my balance because I rotated so much easier than I usually would. But I’m going to go ahead and really let my hips and my shoulders come all the way around as I’m doing that.

You can see now having no problem getting down toward the target.

So if you’re struggling with distance, focus on those two key factors. Loosen up the left heel on the way back, open up the left toe at address, that’s going to allow you to rotate all the way through the shot.

Check to make sure your belt buckle is toward the target, and I want my shoulders a little left of the fairway, slightly toward the left rough as I’m coming all the way through.

That’s going to get you more distance. It’s going to free up your body, make it easier on your joints, and you’re going to hit it farther.

BR024. Swing in BalancePublished: May 14th Get Access Now! 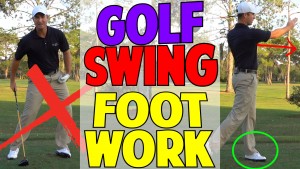