Why You Need This: In this video, you get a great golf flip vs. golf release analysis.

One of the most common issues my new students struggle with is flipping the club and losing their lag early.

They're not compressing the ball well and not getting the power they want.

So, this video concentrates on how to eliminate flipping the club so you can maintain your lag and hit with power.

In the first part of the video, you'll find out where the flip is coming from...

And where should you release the club.

The flip comes from your right arm pushing the club away from your body early in your downswing.

Here's how to stop flipping early...

Feel like your right forearm, right thumb, and right forefinger are relaxed as you start the downswing.

Also feel like your club shallows out in the downswing.

Practice making some one arm swings (both left and right), then practice with two hands.

Watch this video now to...

Maintain your lag for more compression...

And get more distance!

Hi guys, and welcome back to Top Speed Golf. In this video I’m going to tackle one of the biggest problems out there, I see time and time again.

Most of the players that I see that come in through the website or individual lessons, they’re struggling losing this club, the lag, a little bit early. They’re flipping as they’re coming through contact, and they’re really not compressing that golf ball and getting that nice solid strike like we all want to have.

So in this video, I’m going into a little bit of detail about in the Top Speed Golf System, when is the flip? How do we know if we have a flip?

Where should we be looking to see if we’re releasing into the straight line release position, and really getting that compressed golf ball where you feel like that ball smashes against the face and is almost stuck to the club for a good five or six inches coming through contact?

Now I know that’s not the reality of what’s happening, but that should be the feeling you’re getting if you’re really compressing the golf ball.

It’s OK to say stop using the right arm, but what do we need to do differently to actually make that happen for a good release.

First let’s start out with what the flip is. As we start our downswing, the flip comes from the right shoulder and the right hand, the right arm kind of pushing this club. You’re going to feel like your thumb and your forefinger are really tight.

These muscles on the bottom of your arm are really contracting to flip that club through the air, so as these contract, that brings your hand back, this part of your hand down, your thumb goes out and that pushes this club out away from your body.

So I have my FlightScope set up here, we’re going to go ahead and make a swing, and let’s see about how much distance I get. I’m really going to try t hit hard with my right side and hit it as hard as I can, but we’re going to see if I can flip on this one. Let’s try it out here.

It’s really hard for me to do, I’m just not used to pushing with my right side as much. It’s something that I used to do, hit that one in the water, so that’s probably a good reason not to flip.

Let’s see what my distance was. My carry distance was 130 yards with an 8 iron here, with 82 miles an hour of club head speed. My club head speed was still pretty high, I’m hitting the ball hard, I’m swinging really hard at it, I’m just not getting very much distance on it.

We talked about how the right shoulder and the right arm are pushing. So if I’m hitting a flip – let’s get a ball up here – if I’m making a flip my right shoulder’s coming out. A lot of times this is an over the top move, sometimes.

My lower right arm is flexing, pushing the club out. My thumb and my forefinger are pushing against the club, and you’re going to feel really tight up in here too, just because your whole forearm is tight pushing that club. That’s the first piece.

I break down exactly how pros are shallowing this club out and getting a lot more lag. As I start to get some lag, as I shallow that out, that looks really steep. That’s what the pros are doing, it’s what we call The Move, it separates most of the players out there from the top pros.

Then from there, we have to come through impact a little bit differently. This is what we call the flat spot, or impact glide. I want to get that club to really glide through the ball and to release out in front of the ball.

If I’m flipping, I’m going to go ahead and choke up on this club, where is my club very first bisecting my arms? We’re going to see somewhere down here around the ball.

If I’m doing this correctly what’s happening is, I’m getting this lag like we talked about, and as I start to come through the ball, my left leg is pushing down and out into the ground.

So as my hand – let’s imagine my hand is attached here – as I’m pulling this way with my left hand, as my left hand is naturally posting up, that club is going to want to accelerate to catch up to that.

As I’m coming through contact, I am in the act of releasing the club, but I’m getting rid of this right arm push and I’m adding this left hand moving up and out to get that club to whip on through there.

So I’ve got lag, and I’m letting that go really long on through the shot, so I’m getting some good speed as I’m doing that.

I want you to do about 100 reps really soft with the right hand, getting that nice angle of lag, and then feeling like as you’re coming through contact, the butt end of this club is turning up.

That’s what’s going to get you that impact glide so we get forward shaft lean. As the butt end of the club turns up, the club head moves down level with the ground.

After we get this right arm relaxed, we’re going to go ahead make some swings doing that, and then we’re going to take the left arm, post up and get these good full follow through swings as we’re coming on through there.

After we’re comfortable with those moves individually, right arm’s relaxed, we’re making some swings here. Getting some lag, releasing out in front. We can go ahead and just do it just with the right arm only. Then we’re going to do the left arm like we went over.

Once I get comfortable with that left arm, now I’m going to put both hands together, and it’s going to be so much easier to get lag and to really let that lag release out in front. Now I’m going to check it on video to make sure when is my club very first bisecting my arms?

So if I’m here, that club’s bisecting my arms, I’m too early. I want to get to that straight line release position where I have lag and I’m letting that release. Again, that’s because my hand is pulling up getting that to release on out in front.

If you do that, the club’s going to glide through impact, really compress that golf ball. Sorry my FlightScope here timed out.

Let’s go ahead and take a little bit of a break, let this turn back on, and I’ll show you with about the same club head speed or a little bit more, how much farther I can hit it with some good lag and compression.

All right guys, so let’s try out again, my FlightScope is cooled down here a little bit, pretty hot here today in Florida. I’m going to get rid of that right arm push, I’m going to let this right arm be nice and relaxed. The bottom of my forearm is going to be relaxed.

As I’m coming through, what I’m going to focus on is having good lag, and then getting that grip into the club to turn back up to really get this to accelerate on through there.

So it’s not your strength, I know you guys, you see these small kind of players that don’t have anywhere near the strength that you have, getting way more distance. It’s all in our technique, so let’s go ahead and try this out.

I’m going to go ahead and try to hit a good firm 8 iron, and let’s see how my speed and distance improve as I do this. There we go, just a little bit thin. Not too bad, though, we’ll see what the speed and the distance did. The last one’s 126 and only yeah, I think 82 miles an hour.

That was 98 miles an hour club head speed and 164 total distance. So you can see from 120s to 160s, just changing my technique. I probably tried a little bit harder in the first one, where I was really pushing hard with my right arm.

That was actually an easier swing that I took on the second one, but I used the leverage of that club. So it’s not your strength. I believe in you guys, you guys can do this. Good luck, and I’ll see you in the next video.

D097. How to Hit Your Driver Dead Straight!Published: May 18th Get Access Now!

D096. Effortless Golf Swing | How to Transfer Your Weight for Easy PowerPublished: May 4th Get Access Now! 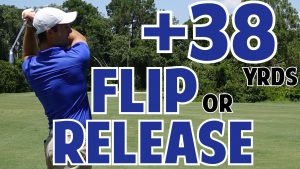