Why You Need This: In today's video, "Golf Distance Test | Straight Arm Vs. Bent," I'm gonna put these techniques to the test...

Which gets you more distance?

Does the bent arm swing give you an advantage that the straight arm swing can't?

But what about Jordan Spieth?

Let's figure this out together...

I'll perform both swings while measuring the results for you to see.

Watch this video today so we can figure out if there really is a benefit to one swing form over the other (or if it's just a matter of who's swinging the club...)

That’s the reason we have our five fundamentals in the Top Speed Golf System, is we talk about the things that are really going to make a difference with your distance, with your consistency, and affect your score.

A lot of people, they talk really bad about the bent arm, we see Jordan Spieth, other top pros, some of them have a little more of a bent arm going back. What does it really matter? What is the difference in distance?

First we’ll do the straight arm, and we’ll measure a couple of these drives.

All right, so that one, the first one I tested out I did a straight arm, about 116 miles an hour, I think, and 310 total distance. I hit that ball nice and solid. Then I tried a few out with the bent arm.

It was a little bit tougher for me, because usually my arm is a little straighter in the backswing. I tried to bend it as much as I could, and I did lose a little bit of distance. I was prepared to say that they’re exactly the same, it didn’t make much difference.

But I did see a little bit of difference in the total distance. The bent arm ones, I was getting about 300 yards on average, right around in there. Kind of similar, a little bit less club head speed, and this could be a couple of different things, though.

I don’t want to just say it’s definitely shorter with the bent arm. I was having a little tougher time squaring it up and getting my normal ball flight, just because I wasn’t used to swinging this way. I think they’re probably pretty close in distance, I do say that I feel like I was a little bit more consistent with a straight arm.

I think having a straight arm could be slightly better, but again, we’re only talking about a few miles an hour of club head speed. You can definitely swing pretty fast, hit it pretty far doing either way. Now the reason that I think that they’re so close, and I don’t think this is like the worst thing in the world to do is have a bent arm.

We see Jordan Spieth does this on every swing he has a bent arm. The reason you can still get a lot of club head speed doing this, then as you swing to the top, even if the arm is bent, say you start down, those arms are still firing.

So as you come into contact, the left arm is still straightening out. There is an argument that says when the left arm bends it creates a lever in your elbow and as you straighten that out you’ll actually pick up a little club head speed.

I don’t tend to think that that’s true, I think that any of that, it’s kind of negated by why they’re shortening the arc. The bigger the arc we have the more speed we’re going to get, so I think that kind of cancels each other out.

The rule of thumb is here, you can probably do either one. I wouldn’t focus a ton of your energy trying to straighten your arm, or bend your arm, or do one or the other.

Go ahead and do what you got, work on other pieces of your swing that matter more like we talk about with the five fundamentals in the Top Speed Golf System.

Good luck to you guys. Go out there, rip that driver, I’ll see you all soon. 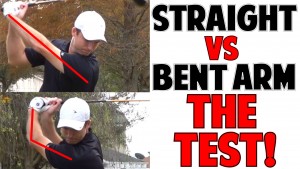