Why You Need This: In this video, you'll learn a great golf bunker cheat to get out every time!

You'll get the 80/20 Pareto Principle look at the key bunker shot moves that really matter.

First, you'll get a discussion on your stance and how you can use it to hit better bunker shots.

Next, you'll discover how much you should open up your clubface.

Later, you'll learn how to release your club for clean bunker shots.

Most golfers fear hitting into the sand...

Once you put the tips you'll learn in this video into your game, you'll think to yourself "no problem" anytime you end up in a bunker.

Watch now to learn the crucial bunker cheats to get out clean every time!

Hey guys. Welcome back to the Top Speed Golf System. Today we’re going to talk about bunker shots so we can get out of that bunker every single time.

I’m going to give you everything you need to know, the Pareto principle, the 20 percent you have to know and do right to get 80 percent of the results, just like the rest of our Top Speed Golf System.

Let’s go ahead and get started right here.

The very first thing that we have to do, is we have to have a fairly wide stance in the bunkers, that way we’re nice and firm, and supported.

I think if we get really narrow like this like we would for a chip or a pitch, it’s going to be difficult to get enough speed on these things, or to get enough stability. This sand can move around, especially if you’re in thick sand.

So get a wider stance, play the ball slightly up in your stance. Now the reason for this is, let’s imagine that this is the center of my stance.

So boom, I’ve got forward shaft lean, ball on the ground, and I’m going to have my straight-line release out here in front of the ball.

Now with a bunker shot, I’m actually going to be hitting tree or four inches behind the ball. So by having the ball up in my stance, I’m going to be able to enter the sand here, my club is going to slide underneath the ball and then come out the other end, and it’s going to loft the ball up onto the green.

So that’s why I want to have it a little bit up in my stance, makes it a lot easier.

Third, I want to go ahead and have this face nice and open. So if I’m holding this up in front of my body, right in my belt buckle here, I want to have that about 20° to 30° open. When I set that on the ground, now I have a lot of loft on this club.

Now I can, this is own personal preference, you can line up a little bit left with your stance to counteract that face being open and pointing a little bit to the right. That’s not a huge deal, but that would be a good thing if you feel more comfortable that way.

Some people set up a little bit more square. I prefer to set up just slightly more open with my feet.

So we’ve got our ball position a little bit forward. We’ve got our face nice and wide open, and then let’s talk about that release point.

We mentioned in the regular one I’m going to have that straight-line release. With our full swing, just like we talk about in the System, 45° in front. Well here, I’m going to go ahead and release underneath that ball.

My club’s almost going to be standing up and down when I’m hitting under this ball, and I’m going to let my wrist go ahead and flip.

This is the only time in golf that you’re allowed to flip the club, and get it to go ahead and release. That’s going to add more loft, and it’s going to help that bounce, or this thick piece of metal on the bottom of your club, now that you’ve got the club open to skip through the bunker.

The last thing I want to do, I never want to do this, is to have my leading-edge square like that and have forward shaft lean.

Because now that leading edge, very sharp, is going to dig down into the sand and I’m going to bury this club in the bunker like that. See how much that dug down in, look how deep that hole is.

That’s very easy from that type of a swing to hit and for that ball to go nowhere, because my club is digging down into the ground. I’ve got to have the face open, that’s going to help it to skip.

The last thing we want to make sure we’re doing from a technique standpoint, is we’ve got to be aggressive with some speed.

We’ve got our straight-line release of the ball, we’ve got our face open, we’ve got the ball on a good stance. Now we’ve go to swing with some authority.

That one I pulled a few feet. Not the best bunker shot in the world, but I got it out and I’m probably got a seven or eight-footer, something like that, to the hole from a 30-40 foot bunker shot.

That’s going to get it out every single time. If I hit it a little bit too hard with an open face, it’s only going to go 10 or 15 feet too far. It’s not a big deal.

If I hit it too soft, it’s going to go a little bit shorter. With all that loft, everything’s coming up and out of the bunker.

If I have a hard pan bunker, that would be the only exception. It’s rained a lot, there’s really not much sand in there, it’s very hard.

If I open the face and I expose this flange to that hard-packed sand, it could tend to skip off the sand, I could hit it thin. That’s why that’s really hard shots.

I still want you to open the face a little bit for those. Try to hit down even more, then you really get underneath that ball, even in a hard-packed sand.

So let’s try out a couple more, and I’ll just kind of recap again what we’re doing. Ball a little bit up in the stance, face 20° to 30° open.

I’m going to have my stance a little bit open if you want to. I’m releasing that club underneath the ball, hitting nice and aggressive shots.

There we go, that one was really good. That one landed right by the cup. Probably three or four feet past the hole after it rolled out.

So finally, we’re going to do a little bit of a game here, let’s actually scoot over to the sand on the right. I’ll kind of smooth this out a little bit, so this will make some sense.

Now when we’re practicing, the biggest thing with bunker shots is to be able to hit the ground in the correct position.

I want you to practice by making a line in the sand just like that. We’re going to start out here, and I want to practice hitting that sand and the line at the same time.

You can see my divot was maybe just a little bit too far back. Let’s try again. That was right on the sand and the line. I’m just going to work all the way up that line, hitting shots.

You may feel like it’s easier if your weight’s a little bit more on your left, that way you can get down and through it.

Once I’ve done that quite a bit, this is going to make it even easier if I put a ball three or four inches in front of that line, and now I’m going to go ahead and hit the same type of shot that I’ve been hitting.

There we go. Really thumped that sand. Oh, a little too hard, almost made it though. We can see that my club entered just a little bit too far back, but it’s right about on that line, which is going to get us well behind it.

If you’re going to mess up, hit a little too far behind the ball, and swing nice and aggressive, it’s still going to come out.

So best of luck to you guys. Get out of that sand every time. Put in the hard work, you’re going to get a lot of up and downs. 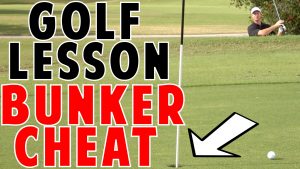