Why You Need This: Today, you'll discover that "Every Golfer Needs to Know This About the Golf Swing"

It's pretty amazing how much better (and more powerful) it feels to hit a ball...

...when your wrists are used properly in the swing.

Unfortunately, most aren't getting it right...

...but today, that's going to change.

In this video, you'll discover the blueprint for how your wrists should move in your swing...

...and when you get it right, you'll feel the power you're capable of playing with.

But, it's not easy to break your bad habits...

...so I'll help you "shock your system" so your wrists can adjust to what they need to start doing...

...rather than what they're used to doing.

Clay Ballard: Now I’ve probably taught maybe 10,000 different students over my entire teaching career, and there’s one thing that I would say over 99 percent, probably one out of a couple thousand people get right.

Everybody else hasn’t really been taught or learned to do this properly. That’s to get the proper wrist angles that the pros are doing.

If you do this, if you use these wrists properly, I can get tons of forward shaft lean, I can get my hands leaning in front of this golf ball at contact. That’s going to allow me to hit it so dag-gone solid.

If you’re struggling to hit the ball solid, then you need to learn this progression. I’m also going to help you to really feel like you get that nice, tight draw when you learn these wrist angles.

So let’s jump right into it. Man, this is going to be a fun one.

Now, most of the time when I see players square up the club, what’s happening is they’re squaring up the club by pushing the hands forwards and backwards.

But I’m not thinking about it by doing this, which is a totally different move. I’m bowing my wrist, my left wrist, I’m cupping my right wrist and I’m releasing like that.

Now Hogan talked about it in his book, this is one of the things he really had right. I think it’s good to know how to move these wrists, it’s what I’m going to teach first.

Then I’m going to talk about the reason that maybe if you have tried this before, that it hasn’t worked and the secret to really getting it to work once and for all.

So first let’s talk about what this wrist needs to do. I’m going to start with my left hand here. What I want to do is I want to go ahead and come halfway down.

I’m going to rotate my logo of my club down to the ground. You’re going to see that’s going to put my club face completely closed.

Now from there, I want to imagine that instead of letting the wrist go forward like this and now you can see my left wrist is cupped, I’m going to give you the exaggeration of how this should feel.

Almost like if I took the logo of my glove, we’re out here early in the morning, there’s a lot of dew on the ground, like I was going to take my logo and just brush all the dew off the ground as I release my hand.

So you see my hand is turning this way, I’m going ahead and getting that door knob turning to the left, but at the same time, I’m bowed.

So it’s like this. That’s the motion of the left wrist. So I’m coming all the way on through. Now that would be the biggest smother hook you’ve ever hit in your life, which is exactly what we want to do.

I’m going to imagine that now my right hand, again the same thing, I’m turning that club head down. My palm of my hand is toward the ground.

If it was on the ground on that dew again, I would be brushing the dew so I’m rotating my hand this way, but I’m keeping my palm down the entire time.

What it is, is your brain is so tied into trying to get that ball to fly the way that you want it to fly, your body just will not let you, your mind will not let you do what we just talked about with those wrist angles.

So we’ve got to break that by kind of shocking the system here. The way that I want to do this, is I’m going to line up straight, and I’m going to hit some low smother hooks.

Now I have a pond to the left of me today. If I was really doing this correctly, I would about 30 balls straight into that pond.

I’m going to do it slowly to show you exactly what I should feel. So again, I’m going to go down to here. I’m turning those hands down.

Logo of the glove down, palm of the right hand down, this club face is so closed. Now I’m not going to flip it and square the club face like this.

I’m going to pet the dew off the ground and I’m going to have that club face really, really closed. So that’s going to look something like this when I hit that shot.

It’s just a low hook to the left. Now if you look at my hands, I’m going to go ahead and turn this way so we can see them easier.

If you look at my hands when I’ve finished, logo of the glove down, palm of my right hand down, club face is completely closed.

This would be the wrong way, this would be more like where your real swing is where my hand is kind of shaking hands, we’ve all heard that.

We want to exaggerate it to where now I would have the palm of my hand down, and the logo of my glove down.

Now if you tend to be a little bit steep in the downswing, you tend to get a little bit here, now all of a sudden when I’m releasing my hands like that, I don’t really want to do that anymore.

I’m not going to want to get steep. When I release my hands this exaggerated way, all of a sudden I’m going to want to come in more from the inside to try to get that ball going more toward the target which is that shallowing out move that we all want to get.

Now even if I shallow it out properly, I’m still going to be hitting it slightly to the left. So the final piece to this, to straightening that out, is just relax on it a little bit.

Feel like you make a little bit more of your normal swing. You’re going to have the hands leaning in front, but instead of having that exaggerated smother hook, I’m going to feel like it’s a little bit straighter.

Once you relax on this drill a little bit, it’s going to take your normal kind of steeper swing, little bit of an early release.

So that exaggeration helps you to incorporate that into your full swing really, really quickly. Now there is one more piece to this.

You know if I stop with just my pro alignments and I get that shaft lean, I’m not going to have the power that I want. Now let me talk about how this kind of fits in the overall, the Top Speed Golf System.

As you know, there’s five real fundamentals in the Top Speed Golf System, but the one we talked about here today is really getting those pro impact alignments so that you’ll have the proper Straight Line Release and my club isn’t flipping past my hands.

I’m not scooping it at the bottom. I’m getting shaft lean and I’m releasing to the Straight Line Release out in front.

Because if I do these wrist angles properly, I’m going to have good lag, I’m going to have a good Straight Line Release, now all it comes down to, is making sure that my body loads correctly in the backswing and heck, it’s going to be pretty dag-gone good golf.

Also pay particular attention to how I talk about how to load the lower body in that Power Turn section. That’s really the secret I find for most players.

A lot of times when players are trying to make a good turn, they focus just on the upper body and they don’t ever load the lower body properly.

I really have to learn to load the lower body properly to make this work. So, work on the Power Turn. I can’t wait to see you there. Let’s go and get started now. 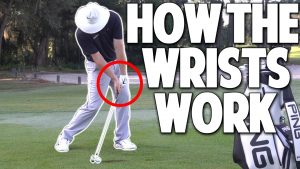