Why You Need This: Today's video is about "Escaping Deep Bunkers"

How is it that the pro's make getting out of bunkers look so easy?

I've even hear them say they'd rather be in the bunker than in the rough around the green.

I think the main reason so many struggle with bunker shots is that all too often, you're just not approaching the shot correctly.

In today's video, I'm going to go over 5 important keys to making sure you're making the correct swing from the bunker.

I'm also going to go over two big no-no's that so many are guilty of doing.

Give me a couple minutes of your time, and hopefully I'll have you saying, "I'd rather be in the bunker than in the rough around the green!"

Let’s talk about a tough shot that a lot of players really them nervous when they’re in a green, there’s this big lip that you have to hit over, and try to get it over this lip and on to the green.

Well one of the misconceptions that I think is really killing players when they’re doing this, is they’re just swinging way too slow.

When I’m hitting a shot like this, I’m going to take my 60° wedge, and I’m going to open up the face on that. I’m probably opening the face to where the leading edge is maybe 20° or 30° open.

If I set that down, that’s going to look like it’s facing up directly toward the sky. Now from here, I’m going to take a pretty big swing and really hit this thing hard.

I’m going to make sure that I hit at least a good four or five inches behind this, and I’m going to swing with so much speed that that club is just going to carry right on through underneath the golf ball.

Now if I was in the fairway and I was setting up with this face square and swinging with that same speed, that would probably be equivalent of me hitting my 60° maybe 60-70 yards, 80 yards even. So I’m really taking a big rip at it.

If you can’t quite hit that far, you’re going to want to take a little longer club, maybe a sand wedge, and do the exact same thing. Even a pitching wedge if it’s absolutely necessary to get a little bit more oomph on it.

I definitely have to have that face open. You start squaring that face up at all from this high-lip bunker shot, no way I’m getting out of here. That’s the first two keys. Wide-open face, really swing hard at it.

There we go, so now I got it up and over the lip and hit a pretty good shot there. It’s actually a pretty easy shot as long as you swing hard enough.

Now the second thing here, where am I playing kind of the ball position? Let’s go ahead and throw another one down here.

So where am I playing this ball? What I don’t want to do is get it back in my stance and kind of be hitting down on it a lot. I like to keep my hands pretty low when I’m doing this.

I’m going to play it a little bit more up in my stance. I’m kind of going this direction. So from the camera angle, that would look about like that. I’m playing it up in my stance.

The reason is, I’m hitting behind the golf ball. I’m entering the sand here. I’m going to lower my knees a little bit. As you lower your knees what’s happening is as you lower that club shaft, that helps get the ball to launch up in the air.

If my hands are high like this, going to be tough to get to launch high. So I’m lowering my hands, playing the ball a little bit up, and again, super, super aggressive.

I feel like I’m keeping that handle low as I’m swinging through the shot. There we go, and another one came out pretty nicely.

Now finally here, the last thing that I would say when I’m doing this, I want to feel like my weight is actually on my left side. This is counterintuitive again.

When we get our weight on our back side, we feel like we can help the ball up in the air a little bit more. The problem with that is, if I get my weight back sometimes, I’m going to hit too far behind the ball.

My club’s going to skip off that sand, and come up into the golf ball. I’m going to do one of those where I kind of hit it back here, and shoot it way across the green. That’s 50-60 feet over the green like that.

That’s way back up there in those bushes. Obviously, you don’t want to do that. Or, you’re going to completely just leave it in the bunker altogether.

So let’s go ahead and get another flat spot here. What I’m going to do on this one, I’m going to feel like ball’s up, weight’s about 60 or so percent on my left side, kind of on this bent leg.

I want to bend this leg, again, that’s going to help keep my hands low. I feel like I’m going to take this full swing and really just keep my weight pretty much left the entire time.

All right, so I don’t want you to stop here. If you really want to become a master of the short game, go to the Top Speed Golf System, go to the Short Game section.

Start with your wedges, let’s work on it there. Work on hitting those distance wedges into the green. That’s going to help you to score on those par 5s.

Or maybe hit it close to the green, you can wedge it up there for a nice birdie, that’s going to feel really good.

Really just to master all those shots around the green. We even have some videos on chipping, pitching, all kinds of different great stuff that’s going to help you to get up and down.

If you do miss a green, you’re not going to be worried about it at all. You’re going to know you’re in good shape and have the confidence to have a little tap-in putt when you hit some good ones.

Best of luck, I’ll see you in the Short Game section. 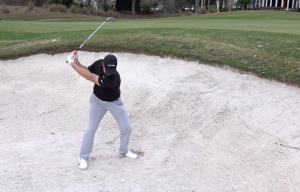